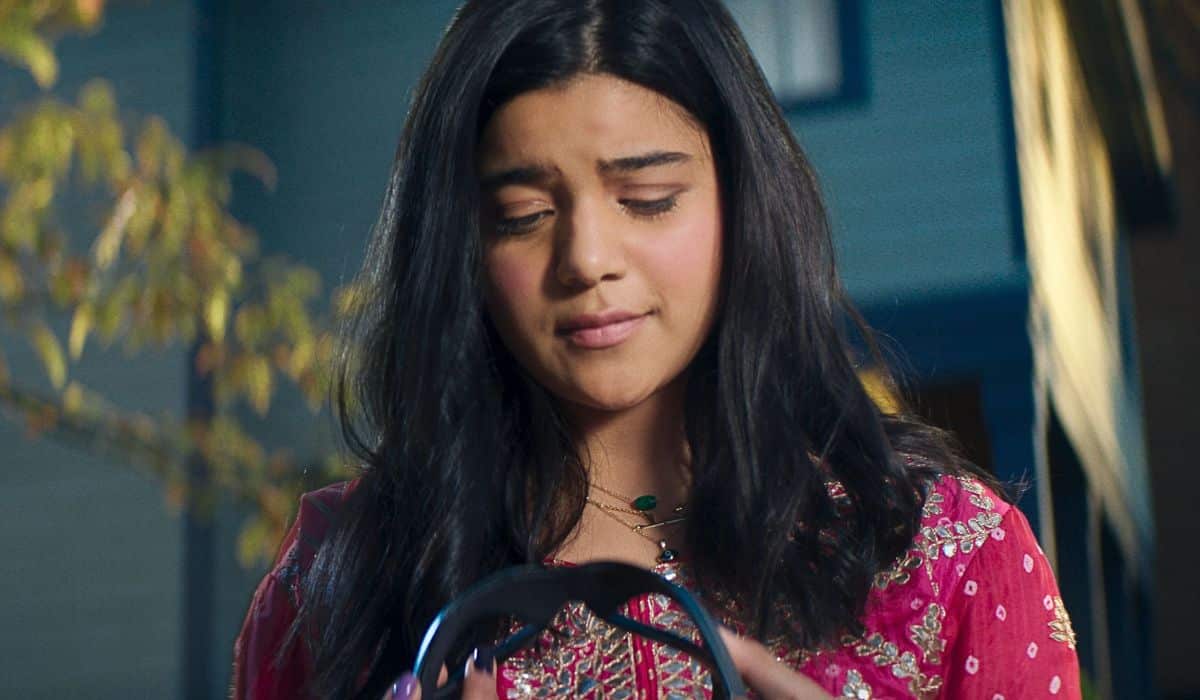 With the third episode of mrs marvel We reach the halfway point of the series and we can already see how not everything in Kamala Khan’s life will be rosy, profiling even better the threat that she will have to face directly linked to her past. Who are the Clandestine? Inhumans? What do the Ten Rings paint in all this?

After introducing Kamala Khan, her family environment, her friends, her enemies and her super problems including her brother’s wedding… It’s time to shake up the poor girl’s life by discovering an important chapter in her great-grandmother’s past that connects her directly with The Ten Rings? While she is chased by Damage Control. Her and the super people with powers. The problems grow. But let’s go by parts.

The episode begins with an overload of information that puts us on the trail of the mythological past that accompanies Kamala relating the origin of the bracelets, with Aisha the great-grandmother, The Clandestine, Djinn, Noor Demensiones, Kree Hands… Immortals. The Ten Rings. Too!

But it is good enough that they bring down our expectations and know how to play with us, and even having read all the Kamala Khan comics, I am surprised that they have decided to rescue The Clandestine and unite them with the origin of mrs marvel. But we will talk about the group in more detail in the curiosities.

Najma reveals herself as the leader of the Clandestine who were exiled from her dimension years ago and only want to return to her. Aisha. Kamala’s great-grandmother. She belonged to the Clandestine but during the Partition she was separated from her and they never saw her again.

Too much information but necessary

Kamala after the emotions experienced by saving a poor child and then almost killing him; escaping from Damage Control and running into The Clandestine and discovering that she is a Djin… she has to return to the real world. And the first thing she does is ask for help from her faithful squire: Bruno.

Who gets to work to find out what the Djinn are and if the return they plan to their dimension would cause a greater evil. While they work out the Nightlight name.

This is how the Inquisition began

Nakia proves to be the fucking mistress without any discussion and I was surprised that she got on the council so soon because I thought it would be a more long-term plot.

Kamala has a major responsibility before her: attending her brother Aamir’s wedding and all the guests and the usual ceremonies that such celebrations entail.

Of course Kamala is concerned with keeping her identity a secret above all to protect her family and friends who have become a target for all the forces that seem to be chasing the young superheroine.

Bruno warns Kamala that if the Clandestine use the bracelet to return to the Noor Dimension, something will probably explode… But Kamala is more convinced than ever that her mission is precisely to do some good with her powers.

Already for scenes like the one with the conversation between Kamala and her Ammi, the series is already worth it because while Kamala is worried about all the moves her mother is going through, she tells her the story of how she came to the United States and she doesn’t stray too far at all of the feeling of everything that his poor daughter is experiencing.

Just like Aamir’s wedding that reminds us again how magical Ms. Marvel is and it’s not precisely because of Kamala’s superpowers but because it shows us another type of culture. And one as stigmatized as the Muslim culture has been.

As Najma’s patience wears thin, she decides to take action against Kamala to get the bracelets. The time for negotiation is over. But Kamran warns Kamala so that her brother’s wedding does not turn into the Red Wedding.

And that is when the first serious confrontation between Kamala and Los Clandestine takes place, who seem to have super strength and enhanced abilities, forcing Kamala to use her powers in the most varied ways. And thanks to Damage Control!

Breaking into the wedding. The government agency stops Najma and Los Clandestine allowing Kamala to flee the scene but not before running into Nakia who discovers that it is Luz Nocturna. But there will be time for regrets.

At the last moment Kamala receives a call from her grandmother who tells her that she must travel to Karachi and that in one of Kamala’s last visions she saw a train and her grandmother saw it too.

Paint that in the next episode we go on a trip.

With the third episode of Ms. Marvel we reach the halfway point of the series and it makes clear what are the real threats that Kamala Khan will have to face as she continues her hero’s journey to discover her true origins in the most unexpected corners.

At the beginning of the episode we see how Najma and Aisha find the bracelet on a cadaverous blue hand. Does this give away the presence of the Kree? And it is that this warlike race that we met in Captain Marvel were the creators of the Inhumans by genetically modifying some homo sapiens that would serve as a genetic experiment to keep an artificial evolution under control.

And we already commented that everything painted that Kamala’s origins were going to be Inhumans… But they go and surprise us with the movement of Los Clandestine.

The Clandestine were a group of superheroes created by Alan Davis presented by a family with super powers that over the years had tried to pass as normal humans until we discovered that their lineage came from time immemorial and they were Djinn.

Adam who is mentioned as soon as the chapter begins. The leader of him. He was its creator. And it is that Adam’s lineage allowed descendants to be born and these ended up joining in Los Clandestine.

Djing is a spirit from pre-Islamic Arabic mythology. A people of supernatural creatures that appeared in the mythology of the Arabs but were adapted into Muslim theology, sometimes as gods or spirits of other religions. Who has never met the Genie of Aladdin’s Lamp? They actually give a really bad vibe. The truth.

Aisha, Kamala’s great-grandmother, also had her own story in the Partition as told in the comic where she met her love and left her life behind to embrace her new future.

Pay attention to the symbol of the Ten Rings! Is the Noor Dimension somehow connected to the Dimension where Shang-Chi’s mother lived? It seems that we will know more about the origin of The Ten Rings in Ms Marvel. Who was going to tell us? Does this mean that we will know who the beacon that the rings activated at the end of Shang-Chi is sending the signal to?

A detail to keep in mind is that Doctor Eric Selvig is mentioned as one of the great eminences when it comes to interdimensional travel. We all remember him!

In the comics, Kamala’s mother was one of the first to learn of her daughter’s secret identity as Ms. Marvel and the two became best friends. Everything indicates that Kamala’s mother already knows that her daughter keeps too many secrets and she should not carry them alone.

In the previous episode I left one of the QR codes that takes us to the first issue of Ms Marvel where Kamran appeared.

With the third episode of Ms. Marvel, Kamala Khan’s life begins to get more complicated than expected when she discovers important aspects of her past that she was unaware of and they unite her irremediably with the bracelets that activated her powers while Damage Control continues to hunt her down and now she has to Los Clandestine having outlined all the threats.

But there is no worse threat than ignorance and it seems that in the next episodes we will cover Aisha’s past much better and we will learn more about that past that promises to give us very good moments in Ms Marvel.

I knew that Najma was not going to be good but at least I thought they were going to give the matter more scope but it is cool that we definitely know all of Kamala’s enemies.

It is striking that they continue to leave clear clues of the Inhuman descendants of Ms. Marvel but have included in the equation a group as surprising as it is strange as The Clandestine.

In addition to uniting the mythological origin of Kamala’s powers with those of Shang-Chi, and when we talk about other dimensions or arcane objects that endow their wearer with great power…

What Ms. Marvel makes clear is that we won’t be able to take anything for granted, let alone the origins of Kamala Khan’s powers, until the series is over.

At the moment Ms. Marvel is being a chill series in which they have definitely removed all the foundations of the Kamala Khan Universe and we will see to what extent this affects the rest of the Marvel Cinematic Universe but this new corner that we are going to see is exciting do explore.

Will they somehow unite Ms. Marvel with all that is to come on the larger scale of the Marvel Cinematic Universe?

Will the Clandestine be Inhumans or are they definitely introducing us to another corner of the MCU? How will the origins of Kamala’s bracelet connect to Shang-Chi’s rings? What do you expect of what is to come in Ms Marvel?

The most beautiful town in Madrid is called Chinchón, it can be seen in one day and its Plaza Mayor is very charming