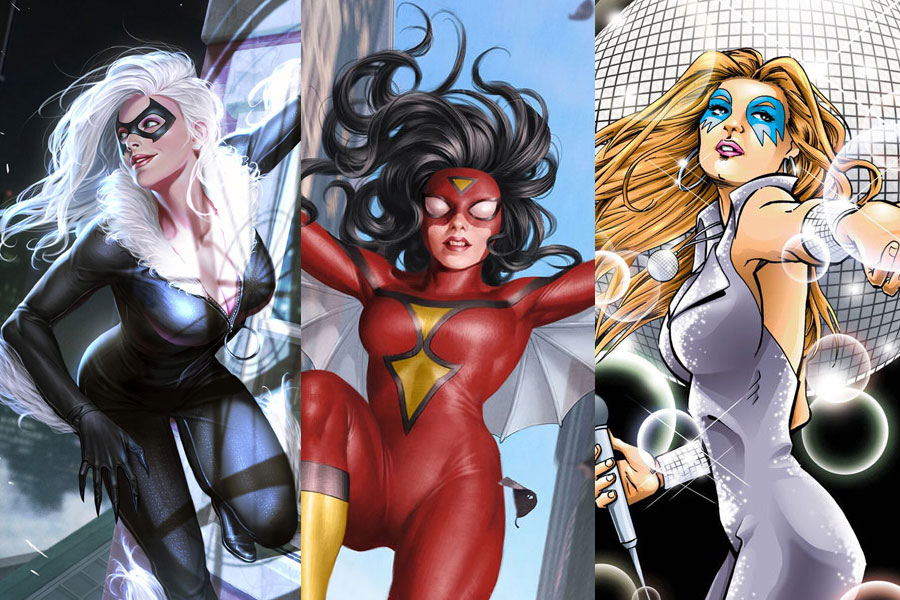 Ana de Armas is getting buzz for Spider-Woman, but there are other Marvel characters she could bring to the screen in a big way.

This Spanish actress is one of the most sought after in Hollywood and has productions on her resume such as Blade Runner 2049, Bond 25 and soon Blonde. She has recently heard a lot of her name for Spider-Woman, the production that Olivia Wilde is developing for Sony. However, there are also other Marvel heroines that Ana de Armas could play perfectly. These are our bets.

Don’t stop reading: Do you know who was the first Marvel superheroine?

As we already said, Ana would be in Sony’s sights to give life to the first Spider-Woman in history. This character was created in 1977, and was in vogue in the early part of the 1980s, then declined for a few years, only to return with a vengeance in the early 2000s, thanks to writer Brian Michael Bendis. Unlike Peter Parker, her powers were derived from an experimental spider blood serum injected into her by her father to save her life as she was suffering from fatal uranium radiation sickness.

Warning: It was recently made official that the Spider-Verse’s Jessic Drew will be played by an African-American actress, but why not a live-action Latina?

Do not stop reading: Spider-Woman will be pregnant in Spider-Man: Across the Spider-Verse

She was one of the first costumed, superpowered female leads in comics. One of her aliases was Black Widow. She was created by writer George Kapitan and artist Harry Sahle for 1940’s Mystic Comics #4, when Marvel was called Timely Comics. She was a demon incarnate who kills her opponents to offer her souls to Satan, her master. After falling into suspended animation, she was revived in 2012 with other World War II heroes, The Twelve. She could function as a sort of Latina, female Captain America.

She is a creation of Scott Lobdell and Chris Bachalo and made her debut in Uncanny X-Men #316 of 1994, although her first important stage was in the title Generation X. The interesting thing about this girl born in Sarajevo is her story, since many of M’s official adventures with Generation X were actually carried out by her sisters, two mutant twins who merged and took her place to impersonate her, after her other brother, the mutant Emplate, transformed her into Penance, a creature of red skin, untouchable and mute.

Alison Blaire is a girl who for some seasons is a heroine, and for others she is a singer. Although his main power is to convert sound vibrations into beams of light and energy that he projects against his opponents, the world of disco-hippie culture that surrounded this character’s stage in the first half of the eighties is something that would be worth worth seeing on the big screen. In the Fox Marvel Cinematic Universe, she appears on an album cover during X-Men: Apocalypse and in person in X-Men: Dark Phoenix, portrayed by Halston Sage.

It’s been rumored for a few months now that Anya Taylor-Joy is in talks to play Black Cat in Sony’s Spider-Verse. Additionally, Felicity Jones, who played Felicia Hardy in The Amazing Spider-Man 2, has stated that she would like to brush up on her character. However, and dreaming a little, Ana de Armas could give an interesting twist to the Marvel antiheroine.

Do not stop reading: If Anya Taylor-Joy is confirmed as Black Cat, this is what she would look like, according to a fan art

Felicia Hardy awaits you in our online store with:

Black Cat is back!

Felicia Hardy has a predilection for the finer things in life and a series of skills that allow her to enter any mansion, vault or museum to… Acquire them. Felicia is on the run from the Thieves Guild and its leader, Odessa Drake.

Get ready for intense heists, thrilling chases, and narrative twists that will keep you glued to your seat! Black Cat prides herself on being able to infiltrate anywhere, but… does that include Doctor Strange’s Sanctum Sanctorum? In a magical place where taking the wrong path can lead to her death and her team as well, they’ll need a ridiculous amount of luck just to get out of there alive, but escaping with the loot will be even harder!

Dolph Lundgren makes things clear to Sylvester Stallone after his anger over the Rocky spin-off about Drago: “There is nothing signed”