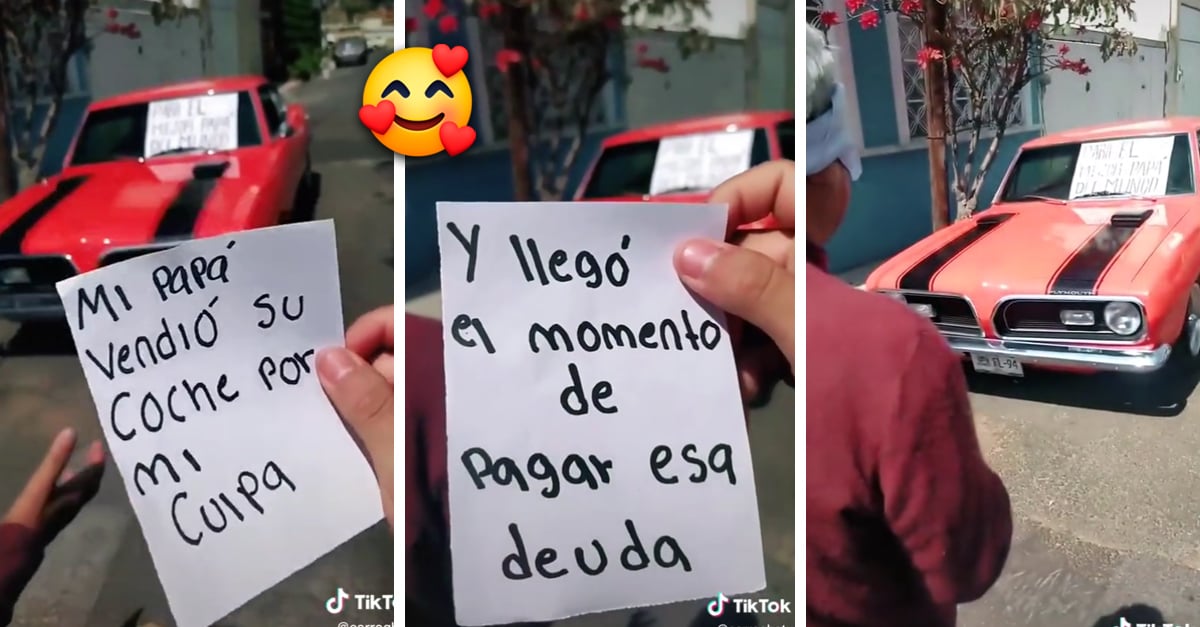 Parents do anything to get their children ahead and when it comes to paying for their studies there is no sacrifice they are not willing to make so that their little ones become professionals, even if that means having to part with their most important objects. precious.

Just like Brayan’s father, who, in order to pay for his career, sold his precious car to see him become an engineer, so upon graduation, the boy decided to return the favor and repossessed the sold car and gave it to his father. .

The emotional story that has touched the hearts of Internet users was shared under the account @carroqhatu on TikTok, in which Brayan, through various roles, explains the story behind the Barracuda 69 car that he is about to give to his father.

In the video, Brayan questions his dad, who is blindfolded as he walks up to the car, about what he thinks his gift will be. However, his father can’t figure out what it is about and, instead of him, gives several wild answers such as that he was going to introduce her to his girlfriend or that she would finally meet a grandson.

My dad sold his car because of me. I was about to drop out of college due to lack of money. But my dad sold the car he had since new, a 69 barracuda. ​​He tried to get it back. The car had already been restored and was priceless. I promised I wouldn’t buy a new car until I got the car back. I am an aeronautical engineer thanks to him and the time has come to pay off that debt.

After finishing telling the story behind the car through some papers, Brayan proceeded to remove the blindfold so that his father could see the surprise he had in front of him. Seeing it, the man began to compare it with the old car he had had years ago, until he got in and, due to a scratch on the dashboard, discovered that it was the same car.

Following this, the young man hands over the keys to his father, accompanied by some emotional words of thanks with which he seeks to return the car of his dreams that he sold to pay for his studies.

Excited, the man did not hesitate to start the car and immediately told his son that the first place he wanted to go was to the pantheon, so that his mother would see that he had recovered his precious car. Although they also joked about going to Acapulco, just like they used to when Brayan was a kid.

These types of stories that move us to tears become viral in a few days and Brayan’s video was no exception, as it got countless views and views, but above all user comments, who were touched by the beautiful detail that the boy had with his father, they applauded his gesture and assured that it made them cry.

Kanye West and Kim Kardashian reach an agreement: this is the juicy figure that the rapper will pay for the support of their children

After 6 years of trying, this girl managed to get sterilized