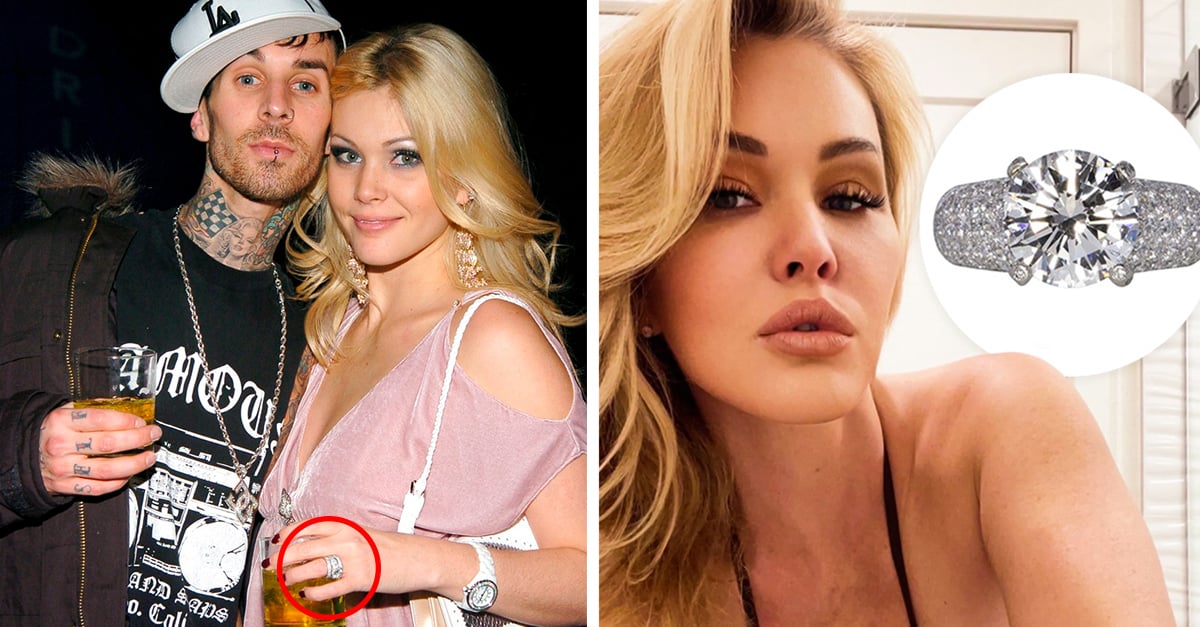 After being friends for more than ten years and after a romance that lasted about a year, Kourtney Kardashian and Travis Barker formalized their love by celebrating three weddings, but with which they finally sealed their union was the one they celebrated at the Castello Brown in Portofino, Genoa, in Italy.

Their wedding was much mentioned by the extravagant outfits that the sisters of the Kardashian-Jenner clan used during the ceremony and for the tiny portion of food on the plates that sparked endless memes on networks.

However, that was not the only thing that this wedding left us, since a few days after the marriage of the Blink 182 drummer with the older sister of the Kardashian-Jenner clan, the news was released that the model Shanna Moakler, Travis’s ex-wife put up for auction the engagement ring he gave her when the musician proposed to her at Disneyland’s Haunted Mansion nearly 20 years ago.

Shanna and Travis divorced 14 years ago and in an exclusive interview for the magazine U.S. Weekly, the former Miss USA said that from May 27 to 31 she would put up for auction the ring consisting of a diamond-encrusted band that surrounds a large solitary stone. This jewel cost around 160 thousand dollars and the model expected it to be sold for 120 thousand dollars.

I think it’s a beautiful piece and it really was the ring of my dreams. However, that chapter of my life is over and while using it once brought me great joy, I hope it finds a new home and continues to bring someone as much happiness as it once did me. It is truly an iconic ring!

The jewel was auctioned through the Worthy site, a page whose main objective is to help people earn up to three times more on their jewelry and watches than what other buyers colloquially offer. The dynamics of selling the site is fast, safe and simple, since the sellers are the ones who establish the price of their products and only pay a “success fee” when selling their jewelry.

Shanna knew people would link her ring auction to Travis’s recent wedding to Kourtney, but she says she has nothing but well wishes for the newlyweds and is thankful they included her children in the ceremony. The two co-parent Landon, 18, and Alabama, 16, but the drummer is also close to Atiana De La Hora, 23, the model’s daughter from a previous relationship.

The auction that began at 51,000 dollars ended on June 1, when the Worthy site announced that the jewel received 17 offers and assured that the buyer acquired it for 96,500 dollars, an amount less than the former Miss Universe expected to get. , as she hoped to sell it for $120,000.

Shanna Moakler decided to keep the identity of the buyer of the engagement ring secret and assured that the only important thing about selling the symbolic jewel is that this chapter has been left behind and will continue with her life.

VIDEO: They assure that Luis Miguel already gave the engagement ring to his friend, Paloma Cuevas

Kourtney reveals she stopped trying to get pregnant with Travis

So fast? Gerard Piqué and Clara Chía already live together and would have wedding plans after showing off a ring

Who Invented the Guillotine? | The terror of the French Revolution

The end of the anime is about to hit Netflix… and the sequel manga is finally coming off hiatus!