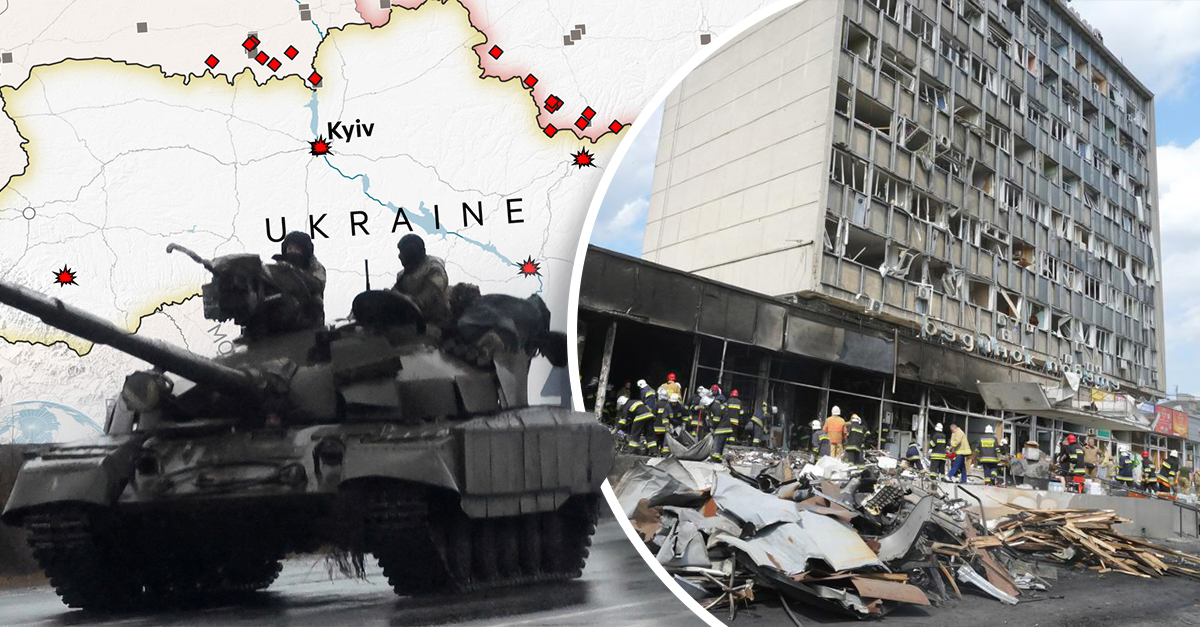 According to reports from Ukrainian authorities, this July 14, Russian missiles that hit a city in central Ukraine killed at least 22 people, including a baby, and injured more than 100. President of Ukraine Volodymyr Zelensky , described the attack as an “act of open terrorism” by Russia against the civilian population of the country in areas without military value.

According to the AP, authorities said Kalibr cruise missiles fired from a Russian submarine in the Black Sea hit civilian buildings in the city of Vinnytsia, located 268 kilometers southwest of the Ukrainian capital, kyiv.

Vinnytsia region governor Serhiy Borzov stated that Ukrainian air defenses shot down two of the four missiles that were launched. However, Ukraine’s national police reported that three missiles hit an office building and damaged nearby residential buildings in the city located southwest of the capital, kyiv.

The attack sparked a fire that spread to an adjacent parking lot, where flames from the fire reached 50 vehicles. So far, only six of the deceased people have been identified, while 39 people are still missing.

The head of the Regional Department of Medical Care, Olha Zadarozhnia, told the outlet that of the 52 people hospitalized, five remain in critical condition and 34 suffered serious injuries. In addition, three children were among the injured.

Through Telegram, Volodymyr Zelensky accused Russia of intentionally attacking civilians with missiles with the deliberate aim of instilling terror in them:

Every day Russia destroys the civilian population, killing Ukrainian children, directing missiles at civilian objects. Where there is no [objetivos] military. What is it but an open act of terrorism?

Ukraine’s Interior Minister Denys Monastyrsky countered Zelensky’s statement, calling the missile attack a “war crime” aimed at intimidating Ukrainians as the country’s forces continue to hold out in the east.

Vinnytsia is one of the largest cities in Ukraine, with a population of 370 thousand inhabitants. Thousands of people from eastern Ukraine, where Russia has concentrated its offensive, have fled there since the war began.

Before the missiles hit Vinnytsia, the president’s office reported five civilians killed and eight others wounded in Russian strikes over the last day. The news came as European Union foreign and justice ministers were preparing to meet in The Hague, the Netherlands, to discuss coordinating investigations and prosecutions of possible Russian war crimes committed in Ukraine. Zelensky is scheduled to address the conference virtually.

Does Irina Baeva confirm a break with Gabriel Soto? The Russian actress breaks the silence

Jenna Ortega confesses that she did autopsies on dead animals

What about ‘Malinche’, the Nacho Cano musical?

Utah Jazz player Kelly Olynyk put her mansion up for sale for $3.5 million