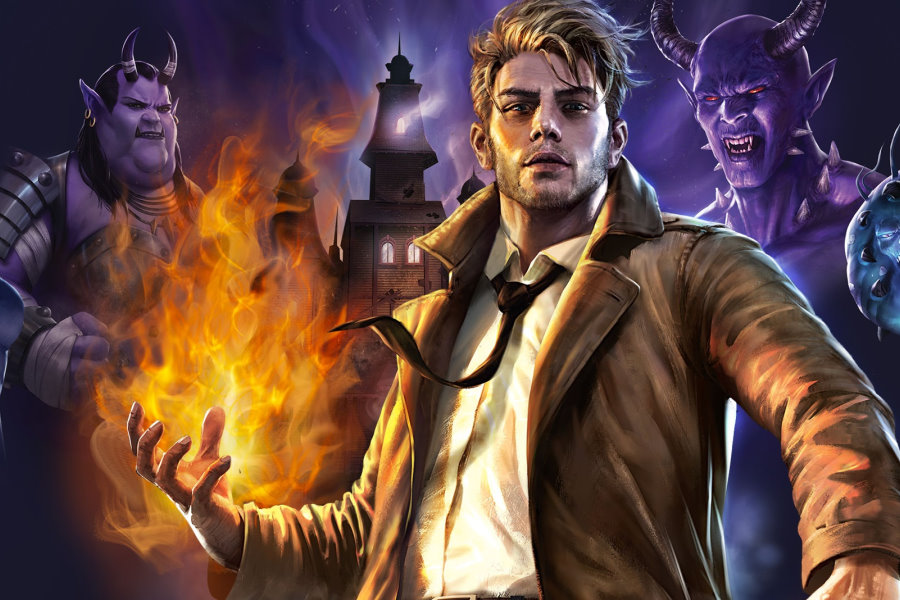 With Constantine: The House of Mystery, DC Comics launches DC Showcase, a series of animated short films that will take viewers into the wildest corners of the DC Universe.

If you’ve ever dreamed of exploring the DC Universe, then DC’s new collection of animated shorts, DC Showcase Constantine – The House of Mystery, will blow your mind.

This disparate batch of short stories takes you through multiple time periods and genres, from the dystopian world of Kamandi: The Last Boy on Earth, to the 1960s Blue Beetle, to the wartime mash-up of The Losers, to the unimaginable. horror delivered by the new DC Showcase Collection short film Constantine – The House of Mystery.

“All of these shorts ended up inhabiting these different time periods and places within the DC Universe,” said supervising producer Rick Morales. “The powers that be asked me if I would be interested in doing some shorts. I said yes and started talking to writer Jim Krieg about it. He already had the idea to make this Constantine short, and very soon it became clear that it would be the key short”.

DC Showcase Constantine: House of Mystery picks up where the wizard’s last appearance left off, in Justice League Dark: Apokolips War, as John Constantine deals with the consequences of altering reality.

“Krieg came up with the idea of ​​tying together the James Tucker animated movie universe with what follows,” says Morales. “I didn’t work on Apokolips War, but that’s one of the reasons I hired Matt Peters to direct. He co-directed that movie, so I felt like he’s the guy that needs to get involved.”.

“I had just finished working on Apokolips War, we thought we were done, and then Rick came up to me and asked if I wanted to direct some Showcase shorts.”, remembers the director. “One of them was John Constantine, which worked as an epilogue to the film I just worked on.”.

It’s a dark and twisted epilogue of sorts, as the titular House of Mystery throws everything they’ve got at John in what feels like a modern attempt at a classic sci-fi/horror tale. As Morales says, “What interested me most about doing this was that it was so much like a Twilight Zone episode. It was a contained mystery that turned violent and bloody”.

We won’t reveal the ending, of course, but the DC Showcase short gives viewers a new understanding of what drives the enigmatic John Constantine.

“Constantine would never accept a rewardPeters says. “He could never accept being happy, and the House of Mystery punishes him for it. It’s a great character study. We had the opportunity to explore the darker side and add some humor to it.”.

Kamandi: The Last Boy on Earth

“We try to take things directly from the comics for thatMorales recalls. “It took a lot of work because Kirby has a very specific way of dividing up the anatomy, dealing with the shapes and rendering the backgrounds. He wanted to keep all of that in mind, right down to the color options.”.

As such, the creative team dove into the character’s classic comics.

“When we got to work on this movie, we brought in a bunch of old comics and laid them outPeters shared. “The designers could see it and the storyboard artists could see it. I really got a chance to study the comic itself”.

Kamandi: The Last Boy on Earth follows its main character as he goes through a series of trials in a dystopian future.

“What grabs me is that he’s a hopeful character in a hopeless world,” Peters reflects. “There is something tragic but also uplifting about that. These characters can inspire us to focus on the finer things in life, and that’s what makes them so heroic.”.

The Losers, meanwhile, features a team of military outcasts battling dinosaurs on a South Pacific island, a throwback to Darwyn Cooke’s DC: The New Frontier, the comic that introduced the team to many of DC’s comic book readers. today.

“Every little boy’s dream is to do something with dinosaurs.”, enthuses Morales. “In my head, when I think of Losers, I think of New Frontier and Darwyn Cooke. I decided to go back to the Kirby look and had one of my favorite comic book artists, Dan Panosian, do the initial designs. It was a great pleasure working with him on this material.”.

The Losers was directed by Milo Neuman, who also directed the Blue Beetle short, and the two couldn’t be more different in tone.

Blue Beetle is a fun parody of 1960s superhero cartoons, particularly one about a wonderful arachnid.

“I had a team of talented creators and I kind of had to tell them, ‘Anything you’re good at, don’t do it.Neuman laughs. “We would deliver sequences and draw pictures of anywhere we could make a weird cut. We would take organic mistakes from old cartoons and do it deliberately”.

The entire idea was conceived during a conversation, once again with DC Showcase writer and producer Jim Krieg.

“The script was really great on paper“, share. “I understood the tone of where we were going from that. I’ve been a fan of parodies all my life. Much of the delivery of the line is big and bold. Each line is almost an advertisement. I had a great time”.

“The Question is too smart for himLanter admits. “Blue Beetle’s intentions are in the right place, but he’s distant. You have a sort of thing between Watson and Sherlock Holmes, if Sherlock Holmes were a bit standoffish. He just doesn’t understand The Question’s intelligent thought process”.

It’s an approach to character and material that almost certainly wouldn’t have been taken if Blue Beetle had been a full-length movie instead of a short. But that has always been the best thing about DC Showcase. Creative teams are free to experiment and take risks, and the results almost always speak for themselves.

You can also read: John Stewart writes his story in the first trailer for Green Lantern: Beware My Power

The road has been long and hard for John Constantine…one that has left him with demon blood in his veins and the voices of dead friends in his head.

Still, with his sharp tongue and unrivaled cunning, the Liverpool-born sorcerer has risen to a position as rarefied as it is dangerous: becoming the wizard of last resort for a world constantly beset by the forces of chaos and evil.

He shows his dirty house and says he needs a wife

Picard’ improves in its season 2, but the series on Amazon Prime Video continues to have bumps in its journey