‘Pig’ (2022), review: Nicolas Cage shows that he is much more than a meme in an overwhelming film about pain, grief and truffle pigs 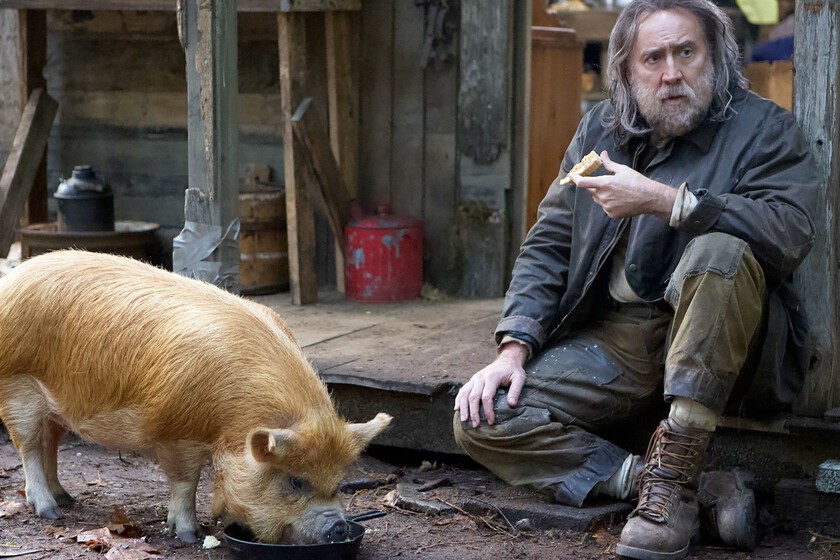 Nicolas Cage is doomed to live his working life with the joke of memes always playing in the background. No matter what movies he makes or the illusion he puts into them, there will always be people who go too far with the joke and don’t know how to see that Cage is much more than the actor in the gifs or an icon on the Internet of the 21st century. ‘Pig’ is the demonstration that it is capable of elevating a film that many will see wanting to joke and will leave with tears in their eyes.

We are increasingly used to films that explode and tell everything there is to know in the first ten minutes and then narrate the consequences of that prologue: ‘Pig’ seems to use this resource (someone has stolen the truffle pig from a man who lives isolated in the bush) but is the excuse to unroll the story of its protagonists slowly but surely: until the final minutes it is not revealed all that lies behind the silences. And it is inevitable not to end up touched.

‘Pig’ could be a fix for ‘John Wick’ for having used ultraviolence as revenge, and in fact he doesn’t disdain it at all, but prefers to show all the layers of someone’s personality as fascinating as reclusive. Rob has lived in different worlds and knows the healing power of words and food, of love as the only possible plaster for an unspeakable pain that does not stop feeling: it is complex, difficult to deal with and magnetic during every minute that it appears on the screen.

It is true that, as a companion, Amir goes much further than anyone would go for good truffles, but his presence is necessary so that the plot does not remain deadlocked. ‘Pig’ forces several leaps of faith, but in pursuit of the character study he does, it is not difficult to get carried away. Especially when the core of the film is in what does not count, in symbolism: no one in the film is capable of letting go of a loved one, and grief grows until it dominates each of their actions. Summarizing it in “Haha, Nicolas Cage is looking for a pig” is a reductio ad absurdum too typical of these times.

Give me my truffle pig

Nicolas Cage signs one of his best roles in this movie: he’s an actor who always gives one hundred percent in each character, even if it’s for a straight-to-DVD snafu, but in ‘Pig’ you can see that, apart from the grimaces and exaggerated expressions, he can give free rein to a performance in which his sobriety stands out, always containing (by the hair) the nerve. Memes and jokes aside, the actor embroiders a role in which he demonstrates what he has always been capable of doing in an impressive interpretative maturity.

‘Pig’ is not a tasteful dish for everyone. It’s a slow movie more focused on profiling an unpleasant character than narrating a detective work in search of the pig in question. And that makes it a fabulous work: leave aside the fireworks and the common places to give details in just a couple of restrained sentences (Amir not entering a room in his father’s house, the cook of the luxury chef receiving the most honest criticism of his life), trusting in the viewer’s emotional intelligence.

In the end, ‘Pig’ is a film in which its festive starting point collides with a reflection on sadness, grief, mourning and how the best moments can become painful memories. And how sometimes you can only find happiness in a few little things imperceptible to others. Come on, have a party.

We haven’t seen such an evocative speech since ‘Ratatouille’ regarding food and the memory neurons it activates. But what in the Pixar film was a celebration of life through eating here is quite the opposite: showing the other side of the coin is vital in a work that leaves no hostages along the way. As cynical as one may be, ‘Pig’ will eventually strike a chord with you.

The debut of Michael Sarnoski (who is already preparing a spin-off of ‘A Quiet Place’) live in the detailsin the tapes you can’t finish listening to, in the trees you haven’t cut down, in the rooms you don’t want to go into, in the food you once tasted. It is a unique experience, a painful thesis and a rare bird on the current billboard. Nicolas Cage could not have chosen a better work to demonstrate that he returns to the front line.

‘Pig’ asks you for patience, but it rewards you with a work full of chiaroscuros, nuances, sadness and love despite everything. Nicolas Cage is absolutely superb accompanying a script that is not willing to let you leave the room without something inside having been removed. And all this looking for a truffle pig.

How to make ajvar, the recipe for pate of roasted peppers with aubergine ideal for a healthy snack dinner

17 interesting things that you can only discover in the forest