Moon Knight introduced the first Egyptian heroine in the MCU 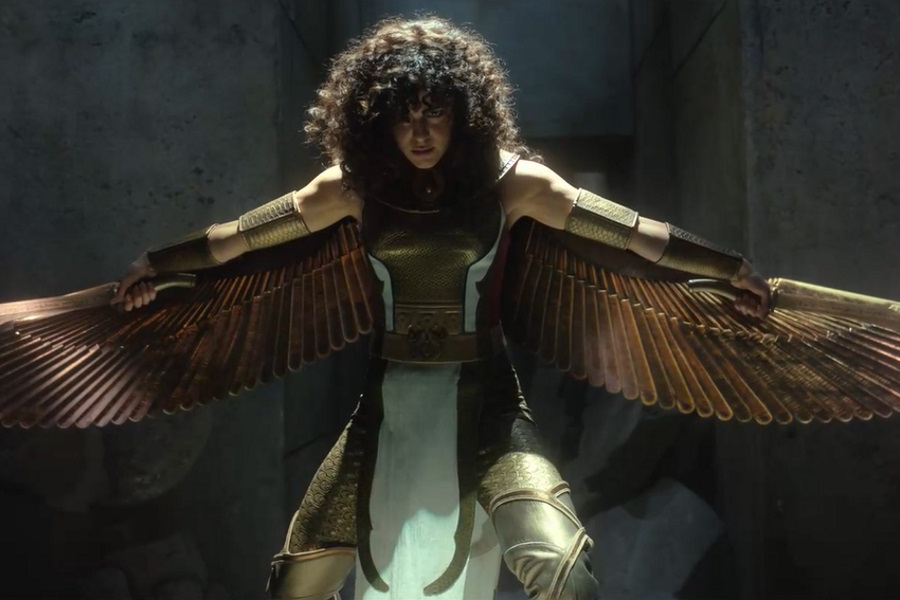 One of the surprises of the Moon Knight season finale was the transformation of Layla El-Faouly into Scarlet Scarab, the first Egyptian heroine in the history of the MCU.

Moon Knight and Mr. Knight are not the only avatars in the series. In a moment of need and seeing no other way to stop Ammit, Layla El-Faouly agrees to be Taweret’s temporary avatar, which made her Moon Knight’s ally and the first Egyptian hero in the MCU: Scarlet Scarab.

Do not miss: Moon Knight: a basic guide to his accomplices and enemies

While Layla is less than thrilled about this (and actually has a contingency list for Taweret as well), the hippo deity is elated, literally yelling “LAAAAYLA!” for all to hear. As the Hall of Gods begins to crumble around them after Arthur Harrow’s assault, Taweret wants to talk about the perfect disguise.

Just as Khonshu previously embodied Marc to speak, Taweret now finds herself inside Layla, as the fierce fighter struggles to balance her movements and the mannerisms of the excited hippo.

Originally, Antonia Salib, who does voice and motion capture for Taweret, was going to do this scene in the episode; however, at the last second, director Mohamed Diab decided it would be best if May Calamawy took over.

“Mohamed came to me 30 minutes before we started filming and said, ‘Actually, I want you to play Taweret‘” Calamawy revealed. “And I was like, ‘What?’ I had to stand in front of a mirror next to Antonia and have her choreograph me on the spot. Honestly, it’s better that it happened this way, because I think that if he had told me days in advance, I would have prepared myself more than necessary.”.

“It was just a testament to taking the plunge and not thinking too much. I’d seen bits of Oscar going through that performance with Khonshu, and I realized that it’s a strange feeling. And that’s what one of the gods said. It’s a bit strange feeling, it can be painful, but you get used to it. And Layla had just been through so much, I thought, what’s a really intense way to show that this is happening? Because she is also someone who resists. She is about someone experiencing what it takes to be an avatar for the first time; not someone who is used to the process”.

Salib was ready to help in the process, assisting Calamawy throughout the performance. “She was frantically trying to copy what she was doing, so I acted out the scene as if I were playing Taweret. She mimicked my mannerisms and intonation, and she really went out of her way to make my performance come to life. Then when we were shooting these scenes, she had a headset on while I was on the mic, giving her the lines. Then we just took all of that away from her, letting her do her thing. It was great; it was an amalgamation of our two performances”.

Plus, Layla gets a cool new costume, complete with wings!

“It’s funny because the pants were amazing”, declared an effusive Calamawy. “We had this guy named Wilbur who hand-painted all the designs on the pants, which I loved, and on the collar. The top keeps you straight, so you’re already walking like that. And he feels really majestic and royal. He’s just… he’s really cool. He’s cool when you forget, and then you look down and say, wow“.

The Moon Knight series follows Steven Grant (Oscar Isaac), a gift shop clerk who suffers from memory afflictions, blanking out or bringing back memories of another life.

Steven discovers that he has dissociative identity disorder, and that he shares a body with mercenary Marc Spector. As they face off against their enemies, Steven/Marc must navigate their complex identities. As they plunge into a deadly mystery among the mighty gods of Egypt.

Moon Knight stars Oscar Isaac, Ethan Hawke, and May Calamawy. Mohamed Diab and the team of Justin Benson and Aaron Moorhead directed all six episodes. Jeremy Slater is the showrunner for the first season.

The first season of the Moon Knight series is available in its entirety on the Disney+ digital platform.

you can also read: What did we see in the post-credits scene of the Moon Knight season finale?

Moon Knight is featured in SMASH and Marvel Comics Mexico

In the desert sands of Egypt, Marc Spector received a brutal beating and was left to his own devices, his body was destroyed by the terrible pain. He was alone until Khonshu appeared. The great god needed a weapon, an arbiter of vengeance on Earth willing to hurt those who deserved it in his name.

A pact was formed and a warrior was born: Moon Knight. The night he had his new protector and Marc Spector had a reason to live. A new opportunity to redeem himself, a new thirst for life and a new purpose.

SMASH and Marvel Comics Mexico bring you Moon Knight: The Fund. Charlie Huston brings us an action story with the strokes of the great artist David Finch

What is the relationship between insomnia and mental illness?

This was the festival of the valley, the celebration dedicated to the dead in ancient Egypt

‘Moon Knight’, Marvel’s dark bet that promises to impact you