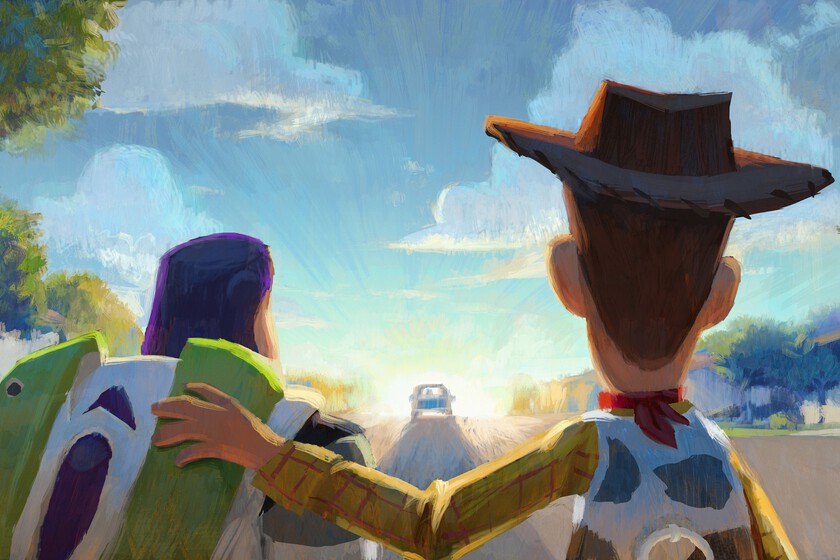 It was the first 3D computer-animated film, and a milestone in the history of cinema: ‘Toy Story’ is not yet thirty years old and it is already a classic, a masterpiece and an immovable pinnacle of animation. And the quality only increased: ‘Toy Story 2’ is a very worthy sequel and, much later, after a necessary break, ‘Toy Story 3’ knew how to overcome the cries of complaints from many of us with the best movie of the saga. But now, ‘Toy Story’ needs an indefinite break.

There is a friend in me

Not so long ago, the release of ‘Lightyear’ I would have broken the lockers despite its concept, which seems simple (the movie that inspired the toy) but the general public has not understood. Only the name of one of the two protagonists of ‘Toy Story’ would have been more than enough to attract mass audiences. Its failure makes us see more clearly something that Disney itself refuses to admit: the saga is already over.

When, at the end of ‘Toy Story 3’, Andy is separated from his dolls, the vast majority of us feel a sense of closure, of a satisfying and full story. And yet, ‘Toy Story 4’ arrived, which many of us already thought we were trying to express milk of a cow that had been completely milked. And indeed, the film is not bad, but it offers a second absolute closure: ‘Toy Story’ had ceased to be fun and an event to become a saga (well done) with which to try to emotionally buy the public. If they don’t let you miss characters, there’s no way you can emotionally invest in them.

Four films, a spin-off, two medium-length films, four shorts, two series, comics, video games… The ‘Toy Story’ franchise is not enough. It has been nice while it lasted, but the box office result of ‘Lightyear’ does not indicate, as a certain sector of the public would like, that the audience has turned its back on the LGTB nods: what it indicates is a very clear tiredness of the sagawhich must stop before it becomes a joke.

When I loved her everything was the best

It is ironic that ‘Toy Story’ deals cyclically with the need to embrace change, take advantage of opportunities to evolve and not be afraid to grow but try to stay in the limelight for more than three uninterrupted decades… And more so when Disney itself has condemned the post-pandemic Pixar to be a streaming product.

The Pixar brand, which should remain intact after tapes as worthy as ‘Luca’, ‘Red’ or ‘Soul’, has been greatly damaged by his conviction by launching directly to Disney+, as if they were second division movies. It would not be unusual to see some of his masterminds leaving the studio after the setback of ‘Lightyear’ and Disney taking control and forcing to do more series of ‘Toy Story’ until, effectively, the cow has stopped giving even the last drop of milk.

A rumor indicated this week that the study was already preparing a project centered on Woody, to the excitement, at this point, of practically no one. ‘Toy Story’ has a very small universe to play with (it’s not, to put it that way, Marvel) and at one point everything that can be told has been told without falling into repetition or in the most mundane and classic adventure. And Pixar is worth more than that.

To infinity and beyond?

‘Toy Story 3’ taught us to keep the memories and the pleasure of showing them to a new generation for you to enjoy with them. This quadrilogy should be exactly that: something to show the youngest, classics with which they all grow together, such as ‘Hercoles’ or ‘The Little Mermaid’. If the brand is degraded by throwing projects increasingly uncontrolled and lacking in quality (Imagine a ‘Toy story 7: the return of Lotso’, for example), it is in danger of ceasing to be the nostalgic and almost perfect work that it is to become a boring and empty repository.

Disney is obsessed with keeping its sagas alive by force (there we have ‘Obi-Wan Kenobi’, for example) and he should learn to raise his hand and let them become myths on their own, as the Disney classics did in their day. And if in twenty years the time comes to make a new ‘Toy Story’ because someone has had a good idea to shoot it (as happened in the third part), it will be welcome.

The failure of ‘Lightyear’ is a shame, because it proposed a fun and original tribute, but perhaps, on the rebound, it will get Disney put the franchise in a trunk and let its memory grow in their current and future audience: let the fans be the ones asking for more deliveries, don’t be the one shoving them down their throats. There is still room to save ‘Toy Story’ from lazinessBut it’s up to Disney to have mercy on Woody, Buzz and company and put them back in the toy chest for a while.

Natti Natasha puts those who call her unfaithful in her place: “I’m not like you”

The life of Kimberly Loaiza’s sister