this spin-off for Disney + has no right to be so good, empathetic and funny 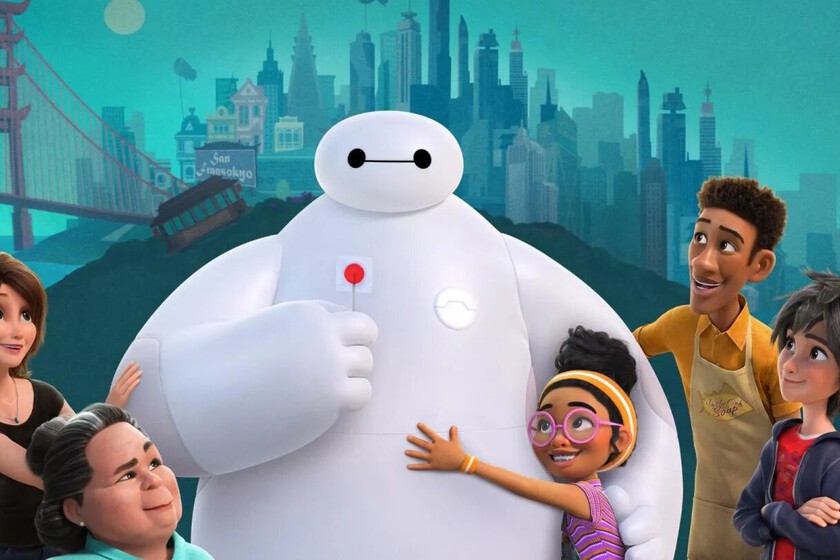 The spin-offs in the form of animated series for Disney + go between the inane (‘Monsters at work’), the inconsequential (‘Dug and Carl’) or the vague (‘Olaf presents’). That’s why when announced a series based on Baymax, the lovable bouncy character from ‘Big Hero 6’, I feared the worst. And yet I have come across one of the best series on the platform, which has made me laugh out loud and cry at the end of every episode. A great little wonder of six chapters of less than ten minutes each, perfect to make a parenthesis in your day to day.

Ten minutes of empathy and laughter

‘Baymax!’, which you can see here, could have been a series made quickly to checkout, but its creators have decided to deal with taboo, sentimental and adult topics without children feeling discriminated against. Kids will enjoy Baymax’s craziness and punches, but adults will find a rich story in which more than one tear will escape. The quality of the animation borders on the level of the film, the new designs are charismatic and amazing, and the stories it tells are very well thought out so as not to fall into cheap sentimentality without leaving aside the emotional part.

It’s been a long time since I’ve seen a series that appealed so much to the kindness of people, to overcome your fears and show empathy for others without trying to preach. Above all, it is a deeply funny series in which Baymax has not lost any of the personality that he already had in ‘Big Hero 6’: every time he speaks, without exception, it’s funny, and his Terminator health condition is even more hilarious. He will chase you relentlessly until you heal, even if it means destroying half the city along the way.

But ‘Baymax!’ it is also an essentially humanist and vitalist serieswhich, with the excuse of curing an infection or healing a broken ankle, tells stories of love, affection and breaking with the past that will leave your heart warm. These ten minutes are like a hug in which one feels that the world, after all, is not so bad. Today it is quite creditable.

The little complaint on duty

Of course, we can’t have nice things, and sadly it is a subject that we have to talk about. If not so long ago the topic of conversation was that two women kissed each other for two seconds in ‘Lightyear’, ignoring the fact that the film is a stupendous take on Pixar-style sci-fi, now the same people try to make everything talk about ‘Baymax!’ be a scene where, for a second, a trans man is buying tampons.

It’s a precious moment in a perfect episode, and defends itself. If it bothers you that in a series they talk about menstruation or that people exist, It’s not the show’s fault. And if a second in a series or a movie is going to prevent you from seeing it, maybe you need ‘Baymax!’ More than what you believe.

‘Baymax!’ makes you believe that you can be a better person, and he doesn’t do it with gibberish or morals, but with comedy, organic relationships and an incredible ending. In just ten minutes it makes you get to know a character better than many movies do in an hour and a half, without that meaning stopping laughing with the lollipops, the scanners and the inexorable slowness of its protagonist or surprise you with the naturalness with which it deals with topics such as death or menstruationwhich were taboo not so long ago (and for many still are).

Between lollipops and street cats

Normally this part is when we start to complain: it lasts too long, a certain character is not treated well, it’s forced… And yet, it is very difficult to find problems with ‘Baymax!’, a series that has no right to be as good, endearing, likeable and hilarious as it is. He even takes his time connect with any of the characters from the original film and in creating a cliffhanger at the end of one of the episodes.

If we get picky, yeah the structure of each episode is very similar. Baymax finds someone with a physical problem, hunts them down until he’s healed, does whatever he can (literally) to make them heal, and the cure leads to a personal revelation. But in just six ten minute episodes there is no time to get tiredand even less when each one of them is created in an almost handmade way.

On Disney+, where the content looks like it came off an assembly line and in which creativity is at a minimum, a series like this is greatly appreciated. ‘Baymax!’ gives hope not only towards humanity, but towards the future of the catalog fund of the streaming service that has given us so little joy. A lollipop?

The most emblematic monuments of Cancun: know their funny nicknames

4 of the best adventure movies of recent years to watch on Netflix, Amazon Prime Video, Disney+ and HBO Max

the authentic mexican recipe made by mexicans