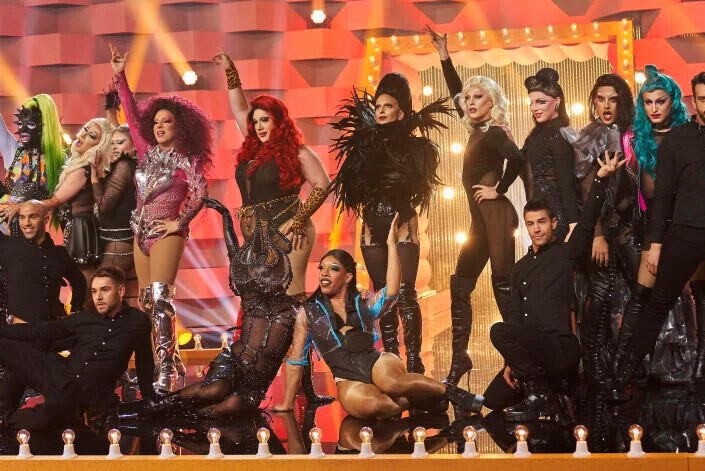 In the absence of the “epilogue” chapter of ‘The Coronation’, we can already say that the second season of ‘Drag Race Spain’ has come to an end. After a close semifinal that ended with four finalists (Venedita, Marina, Estrella and Sharonne), yesterday we were able to attend the final battle between the last four queens.

bring me my girls

As usual in ‘Drag Race’ shows, the final chapter challenge consisted of participate in a video clip (‘Take me to heaven’ from “una tal” Supremme de Luxe) and write part of the lyrics. The surprise came at rehearsal time, when it was revealed that the eliminated queens would participate in the choreography.

At the final gala, the result of the video clip could be seen and all the queens even returned at the time of crowning the next Spanish drag superstar. The jury assessed the strengths and weaknesses of the four finalists and considered that Marine should be the contestant was at the gates of the final (although gossips say it was because she’s a “Lipsync Assassin” and could have overshadowed her teammates… we’ll never know).

After an entertaining interpretation of the theme ‘Neither you nor anyone’ by Alaska and Dinarama (although for you it falls behind ‘La gata in the rain’ from season 1), carmen farala, already a former queen of ‘Drag Race Spain’, took the stage to crown her successor. Finally (and to hardly anyone’s surprise) Sharonne emerged as the winner of this second season.

It is certainly a logical and fair result because, from the outset, Sharonne has shone as the most complete and constant contestant of this edition, achieving spectacular, versatile and at the same time personal looks, with a sense of humor and an outpouring of charisma, without losing humility and camaraderie.

Like the first season, from the beginning there has been one contestant who clearly put it all together to win and there has been little room for doubt. Despite not reaching that level, it must be said that Venedita, Marina and Estrella They have given everything and they have given us a final worth seeing.

We’ll see if next Sunday they reserve something interesting to tell in ‘The Coronation’ and then wait for ‘Queens to the rescue’ to fill the gap left by this exciting season of the ‘Atresplayer Premium’ program.