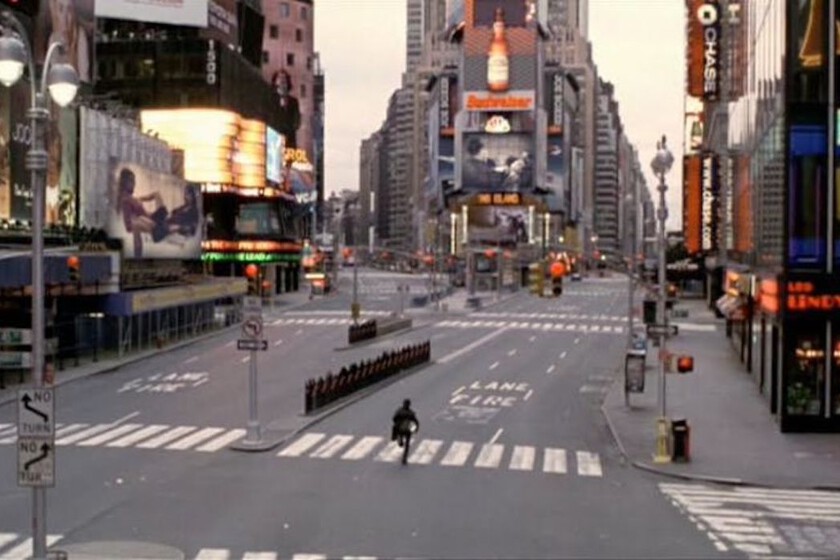 Sunday in November in New York. Four thirty in the morning. The city that never sleeps had been left completely empty, but the reason was not a terrorist attack, an emergency or a parade, but the shooting of a movie: ‘Vanilla Sky’. On the street, Tom Cruise ran from one place to another, enjoying a pleasure that only one person in history has had: have Times Square exclusively for you.

Legend has it that during the credits of ‘Open your eyes’ at the Sundance festival, Tom Cruise went to the hall of the cinema, called on the phone and asked, as it were, to buy the rights from the Alejandro Amenabar film. This is how ‘Vanilla Sky’ was born, which Cameron Crowe conceptualized as a reimagining of the Spanish film but it ended up being a rather crude, obvious and overexplained remake.

Despite popular belief, The film was not a flop at the box office.: He earned 203 million compared to the 68 it cost. Of course, one of those millions of the budget went to shoot just a sceneprobably the only one that has gone down in history and that imitates the one in which Eduardo Noriega is alone on the Gran Vía (well, except for a couple of people who appear on a balcony to the right of the image).

‘Vanilla Sky’ is the only film in the history of cinema that has been able to close Times Square so definitely. Between 4:30 and 8:30 a.m., the NYPD gave the team permission to do something unheard of: filming a scene in a hurry. Tom Cruise ran through the empty streets for more than three hours until he found the perfect shots: many believe it was CGI, but no. And he was worth it.

To achieve this feat, Tom Cruise, Paula Wagner and Don Lee met with the then New York mayor, Rudy Giuliani (also known for his role in ‘Borat 2’), who he was surprisingly delighted with the idea of ​​cutting off traffic so that the actor could advertise the city in theaters around the world. But he had a condition that Cameron Crowe didn’t like too much.

And the fact is that the condition was… to make sure that Cameron Crowe, who had a reputation for making a lot of shots, he could shoot the scene without taking a minute longer than agreed. “Yeah, someone’s worried. They don’t want you in Times Square running around Tom Cruise with no clear plan.” The director must have taken it as a challenge, because when it was time to shoot they discovered that… they had an hour and a quarter to spare. And they weren’t going to waste it.

Cruise, star producer that he is, had an idea: he would just run around. Forward, backward, as Crowe would like, to have shots of him running. The director himself recalls that “it was beautiful. We had extra time. We even ended that early, they counted to fifteen and all the traffic and people just went back to Times Square. It seemed like what we did never happened“.

one and no more

What became clear is that this scene, the one with the million dollars (literally) It could only happen once in history. It is obviously not the only film that has tried, but it is the only one that has succeeded. In fact, a few months later, Danny DeVito gave it a go and got thrown out of the proposal. And it is that not everyone can be Tom Cruise.

There have been more expensive scenes throughout the history of cinema, and curiously some for even more forgotten films. For example, do you remember ‘Speed ​​2’? Well, the scene where the cruise destroys the little town cost a whopping 25 million dollarsone sixth of the budget. Whether it was worth it or not is another story.

how to do the minimalist manicure that has superseded french tips

Dad returns what his daughter stole and apologizes

Carmen Villalobos shines in white leggings after her workouts