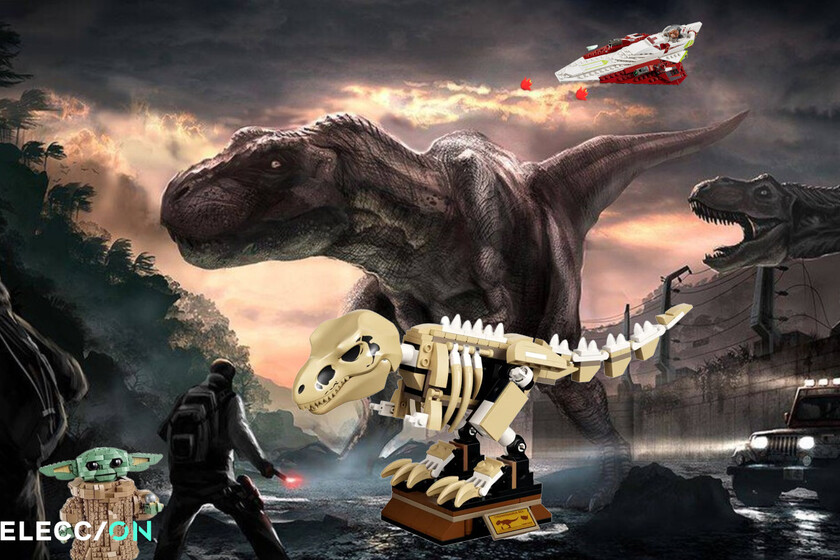 After a long Christmas with discounts on the main LEGO constructions, some of the stores have added a point to launch offers for the sales. Fnac and Amazon have a huge number of these constructions in their catalogue: from Star Wars to DC passing through Marvel and ‘Jurassic World’, and today we have compiled the LEGO They have the best discounts and, obviously, the ones with the best design.

Baby Yoda, Grogu or The Child


It has many names but one thing is clear: we all love Baby Yoda. Disney knows this and that is why it has launched a large number of articles about this curious character from ‘The Mandalorian’; and LEGO constructions are no exception. The figure of Grogu with reference 75318 we can find it on Amazon cheaper than its recommended price and includes a total of 1,073 pieces to not only enjoy displaying it, but also putting it together. Its price is usually around 90 euros in the store -euro up, euro down-, but now it is at an excellent 80 euros.

DC loves to remake its superhero universe for the big screen, so we’ve seen, in this case, a lot of actors in the role of Batman. One of the most classic is TV which began to be broadcast in the distant 1966 and whose hood with reference 76238 in LEGO version we can find at a very reasonable price. In this case, Amazon has also been the store in charge of offering the best price for a construction with 372 pieces which stays at 43.99 euros instead of the recommended 61.99 euros.

We have all wanted to have a dinosaur when we were little, but without it biting us, of course. Now we can have it under a LEGO build with reference 76940 of a Fossilized T.Rex with joints in the jaw, tail and legs. Includes a total of 198 pieces and different minifigures of some characters from the movies, in addition to a fairly cheap price of 22.49 euros at Fnac compared to a usual price of 30 euros.

There are many ships in the universe of Star Wars, and not only refer to those that appeared on the big screen, but also in video games and series. In the second film released in theaters, ‘Attack of the clones’, we could see Obi Wan Kenobi mounted on his Jedi starfighter that has its own LEGO version. The reference is 75333 and comes with a total of 282 pieces and different minifigures -among which is Kenobi-. Its price, in this case, we find it cheaper on Amazon, staying at 29.99 euros compared to 34.99 euros.

It is not the highest grossing film, but it is very important for the future of Marvel at MCU. The characteristic ship of the protagonists of ‘Eternals’ is at a good discount at Fnac, but the LEGO store itself leaves the ship even cheaper Dome Ascent. With reference 76156 and a total of 1,040 pieces accompanied by some minifigures, its price drops from 100 euros to 69.99 euros.

One of the latest additions to the Disney+ and Pixar catalog is ‘Lightyear’, one where we learn more about the history of the characteristic character from ‘toy story‘. The LEGO construction of the duel against Zyclopswhose reference is 76830has 87 piecesminifigures and now we can see it very cheap on Amazon, since it is usually around 20 euros but now it stays at 13.99 euros.

Some of the links in this article are affiliated and may benefit Espinof.

Carlos Alcaraz will participate in the Mexican Open

Japan: where to watch the great game of the Qatar 2022 World Cup for free and online with the pass to the round of 16 at stake