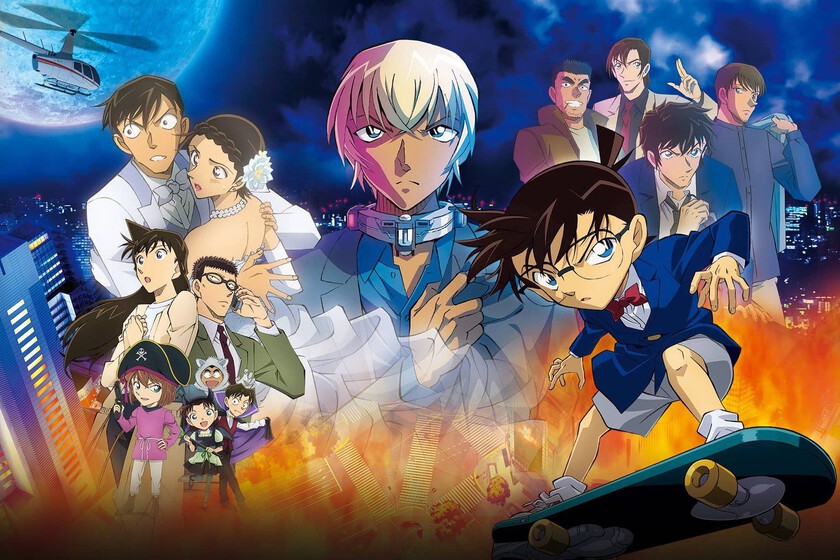 ‘Detective Conan’ is an institution inside and outside of Japan, being one of the longest-running anime on television right now. Not only does it already have more than 1,000 episodes in its main series, but it can also boast spin-offs, crossovers, video games, specials… and 25 movies.

The following feature films on the list are already underway, because it doesn’t look like things will stop for years to come, but in the meantime this July 8th the most recent film arrives in theaters in Spain and is already sweeping in Japan: ‘Detective Conan: The Bride of Halloween’.

Like the previous films in the franchise, this new installment of ‘Detective Conan’ is presented as a new case completely independent of the main series. Because until further notice, ‘The bride of Halloween’ does not fall within the canon of the anime series, so we can see it without fear of disrupting continuity.

The plot begins in the middle of the Halloween season, with a very important wedding about to take place in Shibuya Hikarie. The ceremony is interrupted by a series of unexpected terrorist attacks that are linked with Inspector Sato and an old case that Jinpei Matsuda investigated before he died three years ago.

And how could it be less, Conan Edogawa he dives into the investigation of this new case to try to stop the terrorists, free Furuya and save the wedding, of course.

If you have many chapters and movies left to catch up on, you have to start by saying that you can see ‘The Bride of Halloween’ without fear of missing anything. The film works as a completely stand-alone case and quickly puts you on the spot about who’s who. and the character dynamics that we are going to find.

We also have enough context on who the reality Conan Edogawa is… And most importantly if we don’t remember from the series: who they are Jinpei Matsuda and Rei Furuyaand why his past is so tied to terrorist attacks.

‘Detective Conan: The Bride of Halloween’ follows the formula of the previous films in the franchise and also of the series: small doses of information, gadgets, confusing clues… The anime film gives its fans everything it promises and what we are already used to, although it is also true that so much goes to the source that in the end it ends up breaking.

For those who have a bit of experience with the series (or even with any detective story), the seams to the plot are seen very quickly and the final twist is neither as shocking nor as surprising as it could be. So if you have the slightest eye it reveals too quickly who is the real culprit behind the attacks.

It also works against him that right now the series has a huge cast of characters and they try to ensure that everyone has their little moment in the film, although they don’t match the very specific context they present us with or the tone. So we ended up with a lot of completely wasted characters and much of the plot actually going on behind the scenes without us getting to see all the research.

Animation is above all functional, although there are a couple of moments where it shines more in favor of fanservice with much more impressive action sequences. Of course, precisely knowing that the film is not canon means that there is no real development for the characters or that we come to feel that they are in real danger, not even when they are one step away from flying through the air.

In the end, keep in mind thatHalloween’s bride It is a new installment of the saga aimed at the very fans of ‘Detective Conan’ who know what they want to see. It’s an entertaining movie that gets the job done, but unfortunately it falls far short of the best in the franchise and also makes you wonder how much more you can stretch your gum.

4 of the best science fiction movies of recent years to watch on Netflix, Amazon Prime Video, HBO Max and Disney +

Despite the divorce, Gisele Bündchen will be a neighbor of her ex Tom Brady

Four books to read by Luz Gabás while we wait for ‘Far from Louisiana’, her novel awarded with the Planet 2022