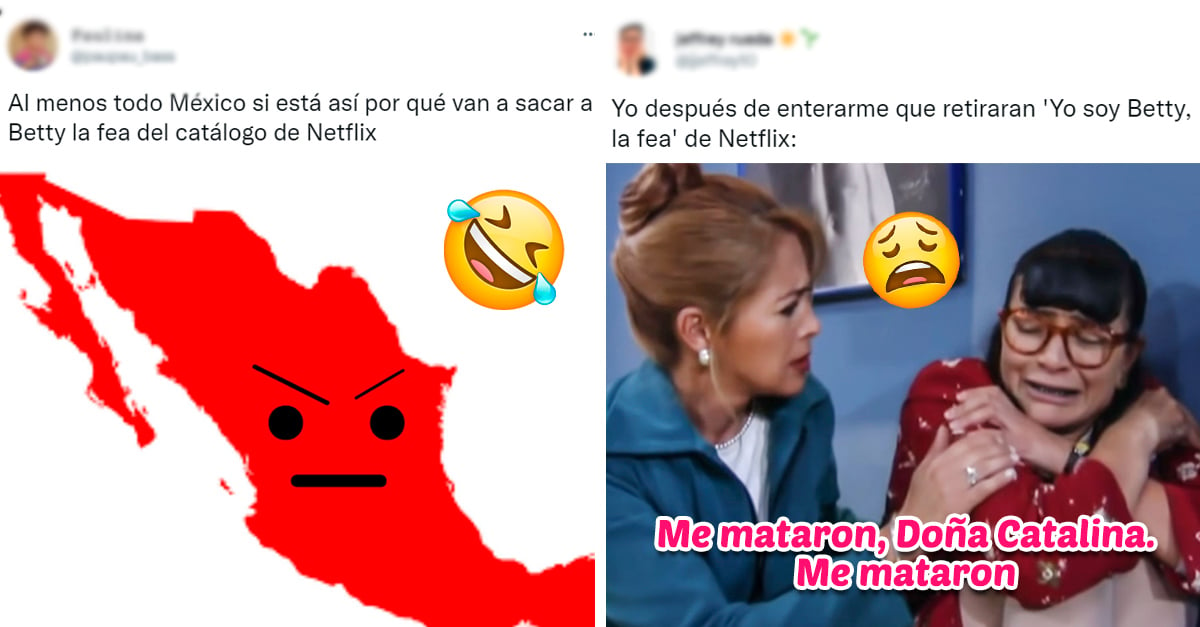 I am Betty the Ugly one is one of the most successful Colombian telenovelas of all time. Despite the fact that its premiere was in the 90s, its story full of love, comedy and drama has captivated several generations that to date have kept it in the Top 10 of the best on Netflix.

However, despite the resounding success that the series has had on the platform streamingNetflix recently announced that the chapters of the Colombian novel that broke all television records will only be available until July 10.

The company has not explained the reason that led it to definitively remove one of the most viewed productions on its platform. What is a fact is that the news was a very hard blow for the fans, who did not hesitate to express their sadness through funny and epic memes that became a trend on Twitter. Here we collect the best ones for you.

1. They killed us, Doña Catalina

Me after finding out that they removed ‘I am Betty, the ugly one’ from Netflix: pic.twitter.com/ApDjWQ5XL2

2. They have no forgiveness

Netflix announces that it will remove “Betty La Fea” from its platform
Me: pic.twitter.com/VmGJhIzkJr

3. It’s going to give us something

My mom when she found out that they are going to remove Betty, La Fea from Netflix pic.twitter.com/6S78Aizab5

4. Now it only remains in our memory

Me seeing ugly Betty in my mind because I already know her by heart pic.twitter.com/TCckw9SpPy

For two years I’ve been watching Ugly Betty every day so that she’s always in the top 10 and do you know how Netflix pays me??? removing it!!!!!! chsm i’m canceling my subscription pic.twitter.com/HUlHmAz4Jb

At least all of Mexico if it’s like this why are they going to remove Ugly Betty from the Netflix catalog pic.twitter.com/IfAN2CDYHI

Will we see all 335 episodes before Ugly Betty is removed from Netflix?? pic.twitter.com/44wevVisFE

When I find out they’re going to remove “I’m Betty, the Ugly” from Netflix pic.twitter.com/sWnwm1LpXt

Me when I found out that they want to remove Ugly Betty from Netflix: pic.twitter.com/ELJaoQ8h6i

When I find out that Ugly Betty is going to be removed from Netflix: pic.twitter.com/OXYLZ8dxoD

Me realizing that Netflix removed Ugly Betty from its catalog pic.twitter.com/jZw4TpBlZy

BETTY LA FEA IS THE ONLY PRODUCTION THAT ALWAYS REMAINS IN THE TOP 10 ON NETFLIX……….. pic.twitter.com/Ikb361h63L

Netflix: We will no longer have “Ugly Betty” in our catalog
Me in short: pic.twitter.com/WCYQl3X7NF

Netflix looking for subscribers when everyone cancels after Ugly Betty is released pic.twitter.com/i5XjM7Hw7s

Revealed the first image of a villain of ¡NAMOR!

The return of ‘Ugly Betty’? Rumors grow of a second part with a sad twist in the story

Celebrities who prove that youth does not end at 30