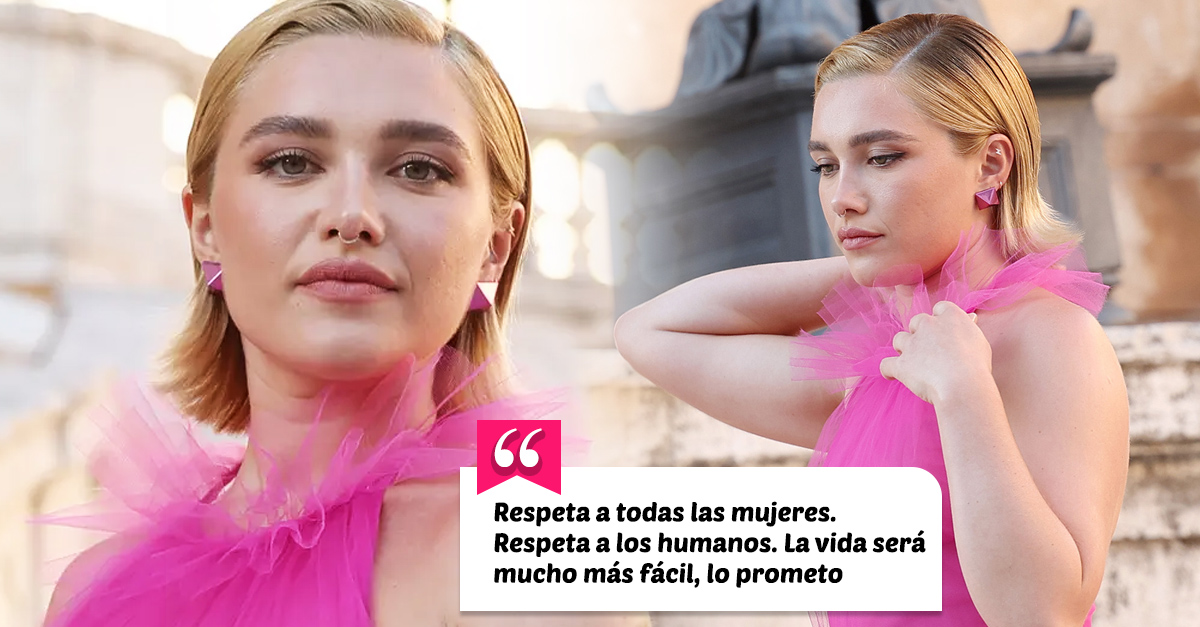 On July 8, the Valentino Haute Couture Autumn-Winter 2022 fashion show took place in the Plaza España in Rome, in the capital of Italy, an event that brought together a large number of celebrities, including actress Florence Pugh, who decided to wear a transparent pink dress that showed her nipples, for which she was the victim of countless criticisms on social networks.

The actress who played Yelena Belova, sister of Black Widow, shared on her Instagram account a photograph in which she wears a transparent sparkling pink dress, the look that she wore for the parade and that her friends seem to have loved. fansbut, unfortunately, she was also quite attacked with negative messages about the size of her breasts and her body.

After the wave of aggressive and vulgar criticism she received from many men on social networks, the interpreter of Amy March in little women She responded with a clear message through a post on Instagram, clarifying that she is proud of her body and that she will not let negative comments change her opinion about it.

Accompanied by three photographs in which she poses in the controversial long dress with layers of semi-transparent tulle designed by Pierpaolo Piccioli and which was also part of the collection of the show entitled The BeginningFlorence Pugh wrote:

I knew that wearing that amazing Valentino dress was impossible for there not to be comments about it. Whether negative or positive, we all knew what we were doing… It’s not the first time and I certainly won’t be the last woman to hear what’s wrong with her body from a crowd of strangers, but what’s troubling is how vulgar some of you men can be.

During the publication, she shared that she was excited to wear the dress and that at no time did she feel nervous about wearing it. What she did exclaim is that she is disappointed to see how easy it is for men to completely destroy a woman’s body.

Pugh said she read a lot of comments from men writing how disappointed they were in their “small boobs” or how embarrassed she should be about being “flat” chested, to which she confidently replied that she happily accepts her body as it is. and that he is happy with everything and his defects.

I have lived in my body for a long time. I am fully aware of the size of my breasts and it does not scare me. What is more worrying is… Why are you so scared of breasts? They are small? Large? Lefts? Rights? Only one? Maybe none? What is so scary?

In addition, she was grateful for the fortune she had to have grown up in a home full of strong women, who educated her to find the power within her body and feel comfortable with it. So she stated that despite the vulgar comments that some men made about her regarding her appearance in her dress, she is happy and satisfied with her body.

The actress ended with a message addressed to all those who believe they have the right to be abusive towards women and criticize their bodies publicly through social networks, asking them to be more respectful.

Mature. Respect people. Respect the bodies. Respect all women. Respect humans. Life will be much easier, I promise.
And all for two pretty nipples…

A strong message that beyond putting in their place those who dared to judge her for wearing that transparent outfit, represents millions of women who have been criticized for the appearance of their body. A round of applause for you, Florence Pugh! Respect!

VIDEO: Mon Laferte joins Belinda and Cazzu in an unexpected way and this is how he expressed himself about the singers