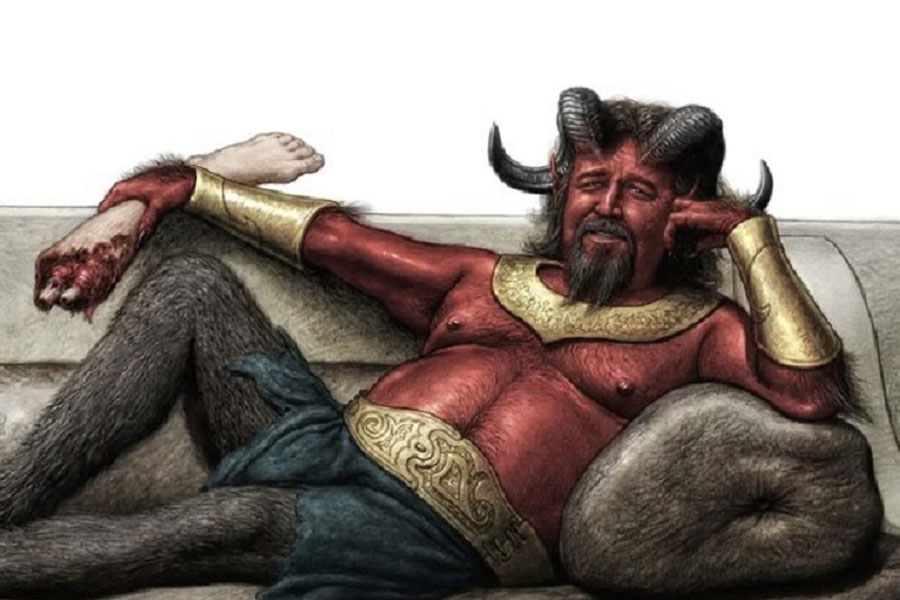 New Thor: Love and Thunder Concept Art Reveals Russell Crowe Almost Played a Demon in the MCU, Was It Mephisto?

Although his presence was highly anticipated in WandaVision without Marvel Studios making the slightest nod that this would happen, that is, with great expectations arising from mere speculation on social networks, without us knowing it, Mephisto was able to debut in Thor : Love and Thunder. Or At least a greater demon, as recently released concept art shows Russell Crowe decked out as a being from Hell.

Although in the fourth God of Thunder movie we see Crowe play Zeus, thanks to concept artist Miles Teves, the character could have been a demon. In three Instagram posts, Miles Teves says that Odd Studio hired him to develop the visual proposal, as they told him that Russell Crowe could have a cameo as Satan. He then made a second proposal, when he was told to introduce the character by being humorously libertine.

Although it does not give more information about the character’s name or the context in which it would appear in Love and Thunder, social networks have speculated on the possibility that it was Mephisto,

Concept art of Russell Crowe as a demon (Mephisto?)

Alongside the image, Teves wrote: “The good folks at Odd Studio in Australia who commissioned this art told me that Russell Crowe might have a comedic cameo as Satan in the new movie Thor: Love and Thunder. It didn’t happen that way. Hopefully, it wasn’t because they saw my drawings.”

In second art, he wrote: “Another image of old Russ as the Devil for Thor: Love and Thunder. The people at Odd Studio told me to portray him at his current weight because his character would be humorously libertine. Naturally, I would have modeled for this drawing myself if my current physique were not so curvy and slender.”

In the third image, it reads: “A final devil for Thor. After it was determined that Russell Crowe was not going to do a Luciferian cameo, I was asked to simply draw a large costume/makeup of a reclining Devil, without his likeness or bulk…”

The film finds Thor (Chris Hemsworth) on a journey unlike anything he’s ever faced: a search for inner peace. But his retreat is interrupted by a galactic assassin known as Gorr the Butcher of Gods (Christian Bale), who seeks the extinction of the gods. To combat the threat, Thor enlists the help of the Valkyrie Queen (Tessa Thompson), Korg (Taika Waititi), and his ex-girlfriend Jane Foster (Natalie Portman), who – to Thor’s surprise – inexplicably wields her magical hammer, Mjolnir, like the Mighty Thor.

Together, they embark on a harrowing cosmic adventure to unravel the mystery of the Butcher of Gods’ revenge and stop him before it’s too late.

The perfect Decathlon thermal shirts to stay warm all winter

From behind, Eva Longoria for the little tail in lycra bikers through the streets of Spain

Britney Spears’ mother comments after not being invited to her wedding