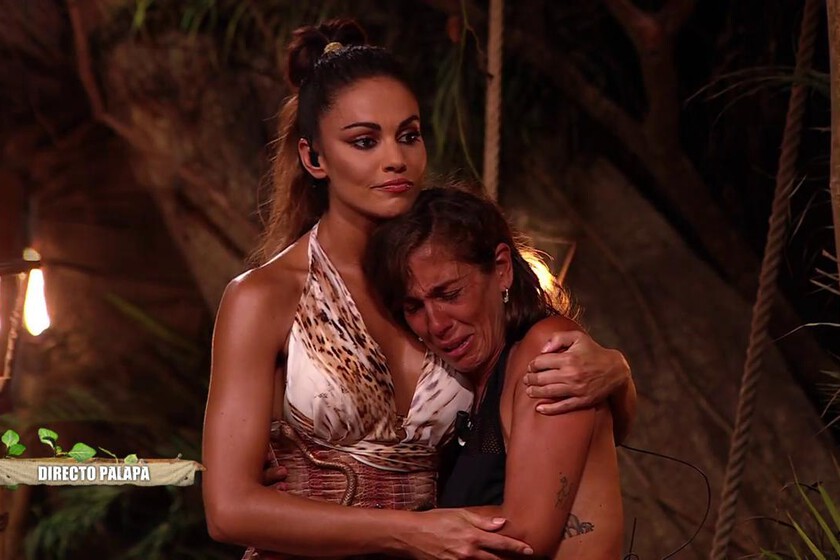 In a video of tonight’s ‘Survivors’ gala, Anabel Pantoja has blamed Ignacio de Borbón for the king emeritus is supporting him “with his army of fans”. Really the time on that island begins to make a dent. Luckily, the program has decided that it is time to reunite and both Marta and the rest of the group have left their beaches behind to enter a new one. The rest of the group? Nope! Yulen has been expelled (finally) and he’ll have to spend a week alone with the former GH contestant before she (or he, with a zero percent chance) is back with the group. Let’s see what happened at gala 12 of Telecinco’s reality show.

Our love was broken

Anabel Pantoja and Yulen, the relationship that nobody believes neither inside nor outside the island, was meant to break tonight. And it is that, as if it were a Shakespearean tragedy, both were nominated tonight and their only hope was that Ana Luque would come out, but after expelling Kiko Matamoros the public was still thirsty for blood and the fencer had to leave and go spend one last week with Marta before his final expulsion.

He and Anabel have continued to have love affairs (a nice way of saying, well, what you’re thinking), which ‘Sálvame’ has already translated into a possible pregnancy of the tonadillera’s daughter. That, added to the fact that both have already talked about having children (or as they are known in Telecinco, “new plots”), results in many in Mediaset are already rubbing their hands.

When you get out of there, Yulen has said goodbye to Ana Luque encouraging her and saying “You’re a champion, the joy here, I hope you take good care of my girl”. Within this drama, Anabel bursts into tears and comments that it is very hard, but that without him she is going to be uphill. Which translated into reality language is “Let’s see where I get videos now that I’ve run out of love”.

Quesitos and quesotes, little ones and big ones

The reward test was original and entertaining for a change: two contestants, linked by a rope, had to pick up torches one by one and drag your partner (if they could). The prize, a delicious cheese board. Things as they are: for a good cheese board all of us (lactose intolerant apart) would be capable of doing amazing things.

Let the organization review the recordings!!!! Alejandro, Yulen and Ana Luque caught cheese while Nacho and Ignacio competed!!! Anabel has also eaten a piece that they have given her!!! Check it out!!!!!#SVGala12 pic.twitter.com/qt53CjAHLR

Ignacio beat Nacho (no, it’s not ‘Me, myself and Irene’), Anabel beat Ana and Alejandro beat Yulen. Of course, it has been seen that, during the first fight, the other four contestants have taken cheese and grapes illegally. Honestly, if we eat cheese when it’s not time for New Year’s Eve dinner, imagine what we would do if we were really hungry. Of course, the organization has not seen anything.

The truth is that the scene has no more, but it has already given for his good drama session among fans of the program. Words like “embarrassing”, “sanction” or “favoritism” flew over Twitter.

And nothing and less to finish the season, unification begins! The contestants leave Playa Uva and go to another where they can be better in petit comitèe. But they don’t go alone: they have been able to board a boat which has given them time in two minuteswhich basically has been absolutely everything they had on the island, including some firewood.

Marta has had less luck, that in two minutes he left half of his things, only to realize that she is alone on another beach again, at least until she confronts Yulen with expulsion. The girl, after give a speech about how much the game has changed for him and being alone, has responded with a “It does not suit me, I have plans. I met the iguanas for tea”.

By the way, the leader game has been the famous pyramid of wisdom, which has left us pearls such as the answers to the question “What fruit does the oak bear?”: Chestnuts, coconuts, nothing and… furniture. Spectacular. Among other questions, they have been asked what an esdrújula word is or what color Santiago’s white horse comes out of after entering the Black Sea. Well, the test It ended in five minutes with the victory of Nacho Palau. Santillana notebooks in the next reward test, please.

As I mentioned at the beginning, in a most Martian gala, perhaps the most Martian has been Anabel assuring that Juan Carlos I, king emeritus, sees the program secretly in Dubai and that Sofia too. It is more, that as in Dubai there is authentic fervor for the monarch, surely they are voting to save him. He’s sorry, he was wrong and it won’t happen again.

Anabel pantoja saying that the king emeritus from dubai has downloaded the mitele plus to see ignacio de borbon #SVGala12 pic.twitter.com/nmjqGCQt7X

At this stage of the contest there are fights every half minute, Sure. In this program we have seen Alejandro charging Nacho and saying that he had been living the story for years without thinking about his children, and later, in the leader test, he protested Lara Álvarez again. It is clear that he has it sworn.

There are only six contestants left., including the more than likely return of Marta, and the stakes are high. There is less left for ‘Survivors 2022’ to end and on the way to ‘The Island of Temptations 5’, but it will not do so without Kiko Matamoros reassuring us from the set: since his return he has already made love twice. We are very calm with the information, Kiko.

Aislinn Derbez had only one fear in life and it came true: “I saw divorce as the worst failure”

Kanye West fired from Skechers for recording without permission

Elizabeth II: the shocking reason why there are no photos of the pregnant queen