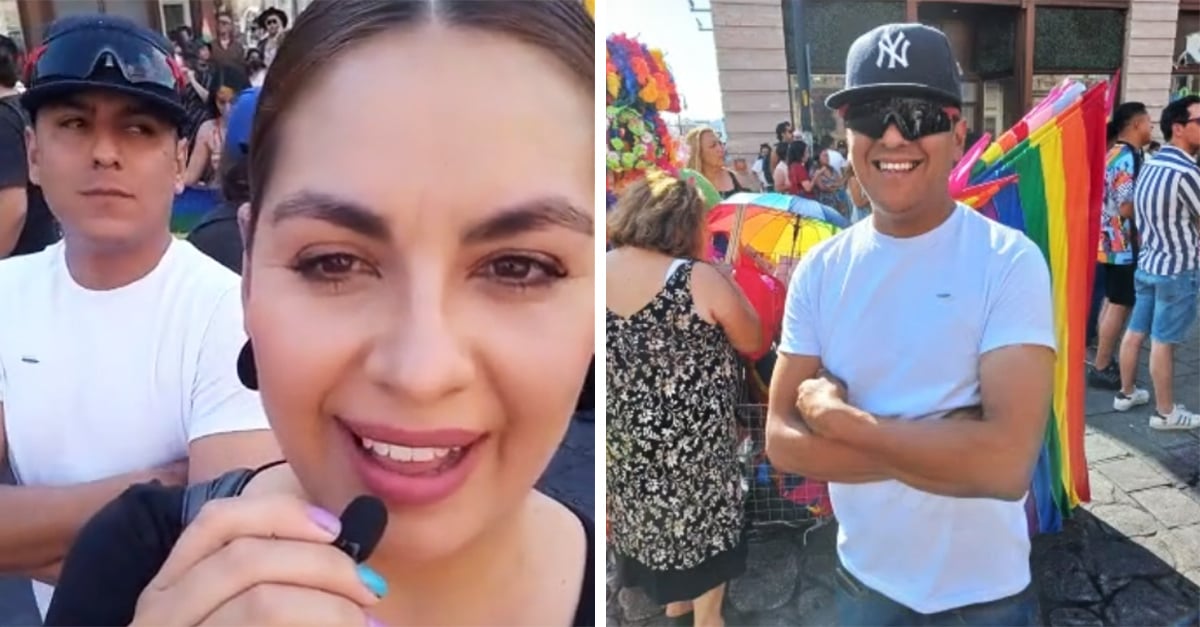 Despite the fact that today there is great progress in terms of the rights of people who belong to the LGBTIQ+ community, there are still those who retain those erroneous, negative and homophobic beliefs that were instilled in them since childhood, which does not allow them look favorably on sexual diversity.

In order to promote respect and counteract discrimination in terms of gender diversity, people organize marches in which they demand their rights and ask for equality.

In the month of June, the International LGBTIQ+ Pride Day is celebrated, so on June 11, a sexual diversity demonstration was held in Saltillo, Coahuila, Mexico, in which a woman went viral on TikTok by ensuring that she brought her homophobic husband to the march to see what his reaction was.

The woman who carried out this funny experiment was Polett Delgado, a reporter from a news blog who, through a funny recording in full motion, said that her husband feels rejection towards homosexual people, so she decided to trick him to see how reacted.

In the video you can see the man with his arms crossed and with a quite serious posture. At this, between laughs and in a mocking tone, Polett asks him if he is angry, but he does not answer and continues to look around him.

In another shot, which appears to be outside an ATM, the wife is still smiling and, in a mocking tone, reminded him of the famous phrase: “What shocks you, checks you.” To end the video, she put an image of her husband in front of a flag of the representative colors of the community and under the cry “Long live love, my king”, she concluded the recording.

The controversy of the situation immediately went viral, so Polett’s publication caused countless comments of divided opinions, in which some of the users took it as a joke, while many others took it very seriously and demanded respect for the spaces in which the community manifests itself.

For this reason, the day after the publication of the original video, the TikTok user chose to share another recording in which she explains the context of the situation for which her husband was highly criticized.

During that clip, Polett explained that she is a reporter for a news blog in which a lot of information about missing women and men is shared, which is why her husband keeps a close eye on her because of the sensitivity of the situation in terms of crime and security.

That is why, as soon as possible, he accompanies her to any interview or demonstration that she has to cover and that was the case with the pride parade. gaywhere they thought it was fun to record this video with the simple fact of having a good time, since he assures that they make jokes all the time and that when asked if he wanted me to delete the video, he answered no.

Before finishing, he stated that he is a harmless man and that he was only taking care of her, that they have been married for many years and have known each other, they have three children together and that their sense of humor is what has kept them together until now.

Woman forgets her baby at her cousin’s house twice

Woman is criticized for having 11 children from 8 different fathers

The sneakers we need for a comfortable and stylish rental

VIDEO: Sylvia Pasquel breaks the silence and is honest about her relationship with Alejandra Guzmán