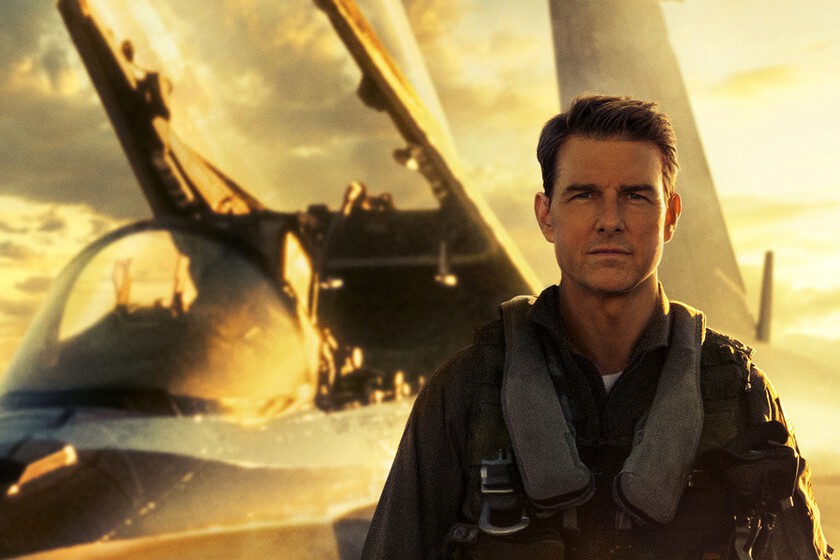 I wasn’t too seduced by going back to the universe started 36 years ago by ‘Top Gun’, since I never really liked the film directed by Tony Scott. In fact, I always enjoyed ‘Days of Thunder’ more, which in the end was an attempt to apply the same formula to the world of motorsports. However, as the premiere of ‘Top Gun: Maverick’ approached, I wanted to see what surprises it had in store for us. Tom Cruise.

The fact that the last person to touch the script was Christopher McQuarrie, inseparable from Cruise in recent years, was one of the aspects that most invited me to be optimistic, since if the first installment clearly failed at any point, it was there. Here it is not that it offers anything from the other world at that point, but it is a solid enough base to build one of the best blockbusters of recent years and far superior entertainment than its predecessor.

It was clear that in ‘Top Gun: Maverick’ they were going to be used many ingredients present in the first installment, but also that it was necessary to clarify others that do not fit too well with the current cultural sensitivity. Of course, with this, for example, I do not mean that the female characters are suddenly pampered and worked, but there is a greater effort so that they do not clash in an eminently male universe.

However, the really important thing is that there really is a story here. Simple and predictable, but also functional and logically developed so that the return of Maverick makes sense and adds a dramatic layer to the function that in the first was subject to the dramatic impact caused by the death of a character.

Interestingly, this is something that is taken up here and is essential to understand the motivations of the protagonist, who here leaves the strong feeling of being a reproduction of some cruise concerns in real life. That gives a little more calm and depth to the character without producing a sudden change in his personality. That more than three decades may have passed and retirement, perhaps forced, is really just around the corner, but Maverick’s audacity is still there, always present.

That gives rise to the first few minutes are closest to the original, with more or less obvious nods to Scott’s tape on a regular basis. That will be maintained throughout the entire footage, but gradually setting aside the idea of ​​being a luxurious tribute to propose an action movie that in its final stretch even flirts with some resources more typical of the ‘Mission Impossible’ franchise ‘.

How could it be otherwise, Cruise’s role is absolute, to the point that I do not remember any scene that does not revolve largely around his Maverick. A story is built around this in which the friendship – much credit for how well the film compresses the three decades of relationship between the protagonist and the Iceman of Val Kilmer with just a few minutes of screen time together- and the family play an essential role, once again giving much weight to the pilots’ training process, but with Cruise always placing himself above his students in Top Gun.

In his favor, he also plays that he knows how to be light in more than one moment instead of taking everything to the tremendous. This way it is easier to connect with the characters and get carried away by the sense of the show that is exhibited here Joseph Kosinski. This was already the most remarkable thing in ‘Top Gun’, to the point that the film was ahead of its time in terms of the treatment of action scenes, while here the best of it is recovered and the latest techniques are applied. technological advances to fully immerse ourselves in the flight sequences.

Also, Kosinski knows go up the intensity in that facet of the film to go even one step further when we believed that ‘Top Gun: Maverick’ had already reached its ceiling. Yes, the ending is what we all expected, but the way to get to it is so entertaining, immersive and spectacular that it achieves the desired effect that we are wishing it would end like this.

Yes indeed, the true soul and guide of everything is Cruise. Like him more or less as an actor, his absolute dedication is indisputable and also his ability to understand what a viewer may want to see on the big screen. It’s been two long years since the pandemic impacted the consumption habits of viewers and I sincerely believe that no movie has been more necessary to see it in a room with the largest possible dimensions than ‘Top Gun: Maverick’.

With all that, I don’t want to say that it is a model film, something that seemed to my colleague Jorge, since it is easy to find small moles, like a somewhat sudden script decision necessary to propel the story forward, but they pale before the capacity of ‘Top Gun: Maverick’ to remind us why these great shows are as essential as the best auteur films for the future of cinema. And it is that as a blockbuster it is exemplary.

‘Top Gun: Maverick’ Is The Movie We Didn’t Know We Needed. An exquisite mass show with a simple but convincing plot base at the service of an impeccable Tom Cruise. And also a film that recovers the spirit of the original to update and improve it, giving us one of the most entertaining films of recent times.