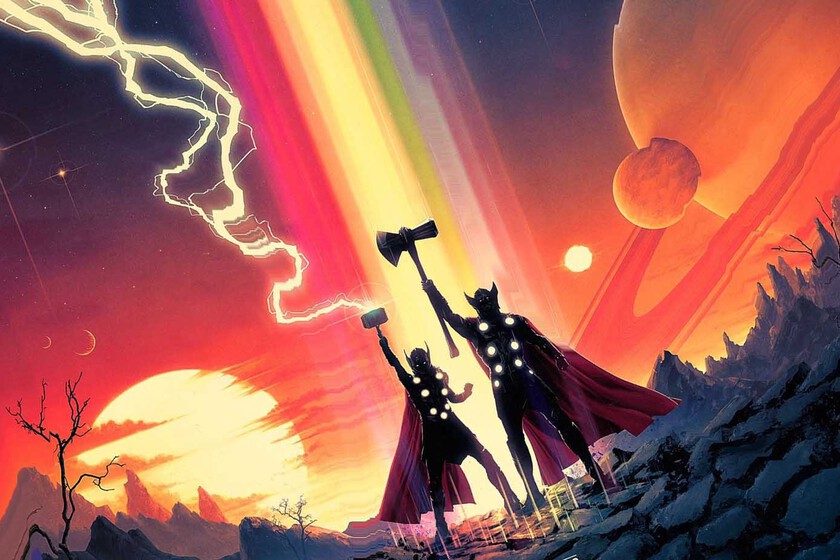 ‘Thor: Love and Thunder’ has been released with the usual good numbers in recent superhero movies, but it has not been as well received, for example, as ‘Doctor Strange in the multiverse of madness’, nor at the critical level , with weak percentages of 67 and 57 in Rottentomatoes and Metacritic, nor at the public level, which has expressed differences with the humorous approach of Taika Waititi’s proposal and his excess of “funny”.

The director’s style, which broke into the Marvel universe with ‘Thor: Ragnarok’, is often associated with a rampant personality that is not to everyone’s taste but has actually managed to fit very well with the Disney sensibility that has ended up taking over of the dynamics within the studio. In his last movie, Waititi recreates an adventure with Monty Python parody logic of superhero movies.

He does, but at the same time he hugs the most primal emotions of the superhero genre, the fanfare and the very fact of the battle and the power beyond belief to try to make the gods human. And this causes the narrative to relegate the moments of struggle and emotion to the moments that go against the grain, it seems that not even Thor himself takes seriously his ability to move lightning and thunder and when he does it is almost by obligation, or by exhibition , as a sleight of hand to entertain the children of Asgard, and those off screen.

The solemn kidnapping of idiotic fun

Marvel’s focus on superhero movies came at a time when the standard for comic book adaptations to movies was measured with ‘The Dark Knight’ (2008), just that year ‘Iron Man’ appeared and rescued a form of understand comics that would change the industry for the next decade and beyond. A more youthful look, fresh and full of humor, that defied the adult and cinephile approach of Christopher Nolan. This same year we have ‘The Batman’, which barely lacks a spurt of blood to be a true horror movie.

And this trend explains how we have been understanding entertainment cinema on the big screen for almost two decades in which special effects have allowed fantastic cinema to finally be taken seriously by the masses and that films like ‘Doctor Strange 2’ have scary moments and pretty strong superhero deaths. Adults enjoy this type of proposal and we have been conquering the rooms, discussing the artistic capacities and the logic of the stories, criticizing with a monocle the films that work and those that don’t.

This has led us to intractable bricks like, for example, ‘Eternals’ that are celebrated for their approach from an independent filmmaker expert in collecting the beauty of the landscapes in front of people with a depressed face. Diversity in the genre is also exploited on television, with celebrated “explorations of grief” like ‘Wandavision’ or even teen looks like ‘Mrs Marvel’. And that’s all well and good, but a child doesn’t want explorations of grief or fully understand the dramas of high school love affairs.

This movie is not (only) for you

This does not mean that a minor cannot be taught all these things, and that overprotecting them and underestimating their emotional intelligence is never positive, but in the end, the genre has become addicted to ‘snyderscuts’ and arrogant critics who celebrate that people jump on their bandwagon of “not swallowing” a director, when children are thinking of rays and patterns seen through an illusion filter based on very elemental drives. For this reason, when movies like ‘Wonder Woman 84’ appear, they are massacred, because they are not intended for us.

And that is why it seems that ‘Thor: Love and Thunder’ is the last example of a superhero movie made specifically with your child target audience in the head that is received in a terrifying way by the majority who have become accustomed to big screen entertainment adapting to age ranges that do not contemplate more silly, spontaneous formulas and without the burdens of a mortgage on narrative logic and the coherence to which even the most authorial offers of Marvel have accustomed us.

The tendency to the plastic and tonal homogeneity of all the MCU cinema seems to hinder the ability to differentiate between one project and another. It seems that the dry, thriller tone of ‘Falcon and the Winter Soldier’ ​​is confused with the generic, while the baits of mimesis with jokes in ‘Wandavision’ rise to little less than a new cinematographic language for analysts who project everything they want the house of entertainment to be for them. The differences between products are as subtle as they are confusing.

This brings us to ‘Ragnarok’, whose humor is interpreted as subversive, a bad imitation of James Gunn, when it is rather of a much whiter sensibility, capable of incorporating the absurd, which in ‘Love and Thunder’ practically becomes innocent surrealism, a compendium of awkward silences and Chris Hemsworth dressed as a hotdog. Something that offends the sour humor police, that is, those people capable of taking seriously a movie with Chris Hemsworth in a sausage suit.

Not only does it get to that, but there are specialized media with potential Boyeros, but with the well-starched collar of the supposed progressivism, who affirm that the nude of the hero in the film seeks cheap provocation, when what it shows is a stupid celebration of the actor’s body, which breathes the camp spirit of the Italian peplumthe cult of the male body, distilling erotomanic impulses that deconstruct the testosterone image of the strongman in the cinema (watch out for that final Dwayne “The rock”) with his ass in the air as a celebration and never as a “challenge” to morality.

‘Thor: Love and Thunder’ is full of editing problems, special effects shortcuts and all the flaws that have been and will be derivatives of the green screen cinema to which we have become accustomed, and also with the aggravating circumstance of the uncritical use of Stagecraft technology, but in one way or another it is above all this, it prefers to subordinate the action to the relationships of the characters and humor, but among all his intentions the one that prevails is to get a good film aimed at children.

A cartoon from the 80s and 90s on the movie screen

Waititi follows the inertia of the reckless space opera of ‘The Magnificent 7 from Outer Space’ and achieves the collision of ‘Masters of the Universe’, the ’80s ‘Flash Gordon’ movie, with its soundtrack by Queen cleverly transformed into a Guns ‘n’ Roses jukeboxand the animated series ‘Thundercats’, a mash-up that didn’t yet exist in the Marvel universe, a true midday ’90s cartoon in the form of a contagious manual on how to get kids out of the theater by calling thunder with a Mjölnir invisible in the raised hand, with an overdose of sugar and rays of colors.

On the one hand, it shares the spirit of a silly sequel to the superhero movies of the 80s and at the same time of animes like ‘The land of the rainbow’ or ‘My little Pony’. Her absurd humor is very white and transparent hooliganism, very far from the cynicism and edgy spirit that she is wanting to attribute to her, but she also embraces the naive adventure spirit of gods and monsters from ‘Clash of the Titans’ (1980)laughing at that whoremonger Zeus as he re-creates those deadly scorpions from Harryhausen into Gorr’s stupendous shadow creatures.

Christian Bale reformulates a Disney villain who could be a cousin of Hades from ‘Hercules’ —recall that there was a deleted scene of the butcher dancing—, which gives a clue about the general tone of a film made for Disney, with the sensibility of a Disney animated film, by a director who entered the company by that way. If there are any doubts about the general tone, Gorr goes from being the butcher of gods to a Pied Piper of Hamelin.

How to bring hero movies back to kids

Like the forgotten Kevin Smith, since he opted for the Oscars with ‘Jojo Rabbit’, the name of Taika Waititi no longer creates as many passions as his time of ‘What we do in the shadows’, although some chisgarabis take chest that I already had a mania for him at that time. The rejection is to a certain extent natural given the omnipresence of his last name lately, but his gaze, even if it is addressed to a wide audience, is still that of an author, with kiwi phlegm and a sense of humor that relies on the viewer’s ability to share their taste for the stupid.

But the most important thing is that ‘Thor: Love and Thunder’ recovers the naive idea of ​​expecting to be received by a not especially cynical public, who don’t look at whether a director thinks he’s very funny, or whether he has good or bad taste in music, but rather at those who want to be like the children of Asgard who Thor allows to be superheroes for a day. We have spent many years appropriating a toy that we are proud to defend as a culture, as valid as any other type of cinema, let us let its legitimate heirs play with it from time to time.

In tears, puppy says goodbye to his owner at his funeral