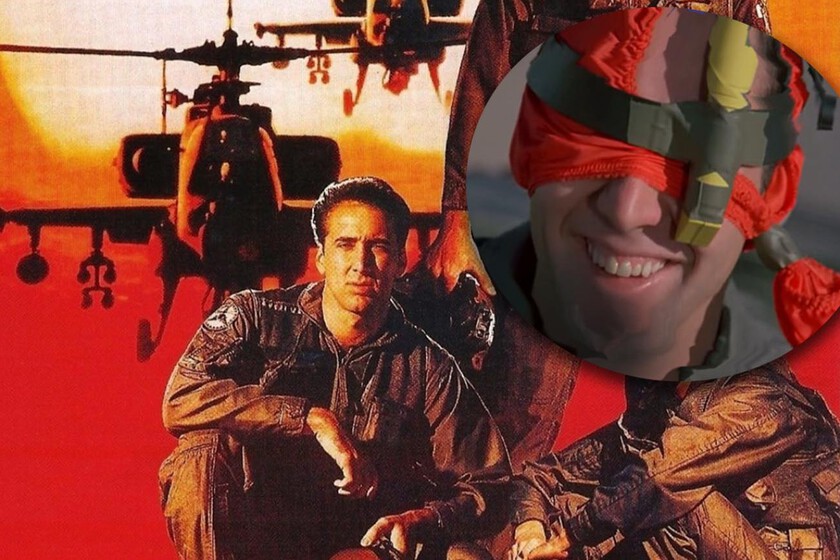 With the advent of ‘Top Gun: Maverick’ in all theaters, some may question the success of the original film in its day, but there may be no better proof than study the trace he left in the different imitations and Hollywood attempts to repeat the success of Tony Scott’s classicincluding films like ‘Steel Eagle’ (1986) and the version with combat helicopters, ‘fire birds‘ (Fire Birds, 1990) which was piloted by… Nicolas Cage.

Cage’s career up to that point hadn’t yet taken the wacky detours it would take in the same decade, but casting him as Tom Cruise’s lookalike in a derivative version of the original is something that can only happen in the American film industry. Wasting charisma and bravado —Who better to reinterpret the arrogant character of Tom Cruise?— and his budding movie star magnetism, Cage plays Jake Preston, a Maverick reproduction who pilots a helicopter instead of a fighter like no one else, but other than that, they are practically the same character.

But if Maverick is a smug jerk, Preston is straight up sleazy, egomaniacal, and sexist., in the words of his romantic interest and ex-girlfriend Billie, played by Sean Young, is “Neanderthal trash,” a leading man so intensely unpleasant that he’s an anomaly in an action movie of his time, but he comes across differently with the actor. from ‘Mandy’ to the front. It’s actually one of those roles that he plays the larger-than-life villain, only he gets to be the hero.

A reproduction of ‘Top Gun’ step by step


‘Firebirds’ opens with a quote from drug war-obsessed President George HW Bush who didn’t mind sending big planes and helicopters against the cartels, making this movie a kind of glorifying justification for the U.S. military. America and how whatever they do is right. Very typical of the time, even the first ‘Top Gun’, but here takes the levels of propaganda to the extreme.

The credits sequence is a deliberate reproduction of Tony Scott’s opening piece, with the silhouettes of helicopters on an orange background—also like ‘Apocalypse Now’—but with quiet fanfare music, with the titles in white with a similar font and layout. As in the archetypal adventure of Tom Cruise, the impetuous young man must overcome past traumas and self-doubts to prove his personal worth. and professionally with the help of a tough but supportive mentor who sees all his hidden talents, while falling in love with a girl who pushes him to do his best.

With quite a few very competent aerial combat and training sequences, the film follows Preston as he practices to take down South American drug mercenaries, under the tutelage of veteran Tommy Lee Jones flight instructor, who here plays Michael Ironside, only much funnier and more playful. At the time, the actor wasn’t a dour, twilight Oscar winner but a tough action hero, and here he joins the slapstick with comic book enthusiasm that elevates the film into an infectious B-series.

Produced by Disney through Touchtone Pictures

But of course, ‘Firebirds’ is a good container of select Cage moments, like the training simulation sequence where he screams repeatedly. “I’m the best!”and the best of all, an aspiring classic of the Cage meme with the actor driving a military jeep while blindfolded and wearing red panties strapped to his face as he laughs like a freak. A piece of cinematic surrealism that appears because the film replaces Maverick’s crisis of confidence with a subplot of a lazy eye from the pilot, who apparently didn’t get basic psych.

Cage’s Preston spends the film bordering on harassing, making almost Torrente-like sexual double-entendre jokes and being so cocky that the enthusiasm and over-the-top performance of Cage seems like a kamikaze parody of Cruise’s archetypal ’80s winner. with what heThe film functions today as a delirious and involuntary self-parody of the armya serious version of ‘Team America’ or ‘Tropic Thunder’ that becomes extremely entertaining with its fleeting 85 minutes and its load of uncalibrated testosterone.

‘Firebirds’ is a military exaltation and the slaughter of traffickers with characters fascinated by their helicopters to an almost sexual point, an anomaly in the rising career of Cage, who appeared in films by the Coen brothers and David Lynch, but who had a budget of 22 million dollars, powerful for its time, which was paid by Touchtone Pictures, owned by waltdisneyto leave us a delusional deification of US armed power, ideal to accompany the viewing of ‘Top Gun’.