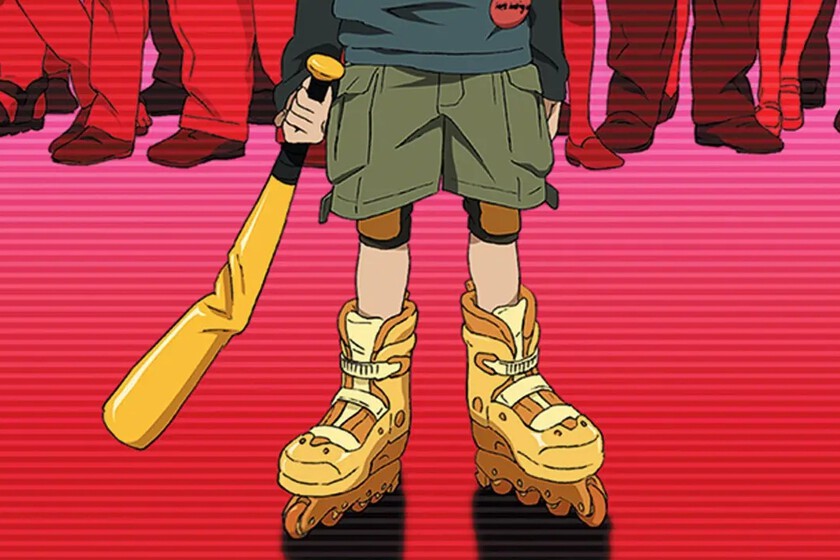 When Satoshi Kon died prematurely in 2010 at the age of 46, cinema and animation lost a unique creator, leaving us with four unforgettable films (‘Perfect Blue’, ‘Paprika’, ‘Millenium Actress’ and ‘Tokyo Godfathers’) and this series. ‘Paranoia Agent’ (‘Mousou Dairinin’) was Kon’s only foray into the serial format and in his 13 episodes he crystallized all his obsessions.

Watch out for Bat Boy

Tsukiko is a graphic designer who has created Maromi, a popular mascot that is successful in all kinds of merchandising. However, the young woman is going through a depression when she sees that her co-workers reject her and her boss pressures her to create a new successful character. One night, Tsukiko is attacked by the Boy with the Bat, a mysterious boy who beats people who are on edge. The police begin to investigate him even though each new investigation is more incomprehensible than the previous one…

Without a doubt, this is an anime by Satoshi Kon because we see in it many of the features that characterize his cinema: complex and tormented characters, thorny issues treated crudely, dreamlike images and that feeling of not being able to differentiate dream from reality.

The full creative freedom of the filmmaker is noticeable in the series, as he does what he wants with the genres and the structure. All it starts like a drama intimate, getting into the head of that depressed young woman unable to deal with her current situation. Later gives way to terrorwith that inexplicable figure that is the Boy with the Bat, and then adds police thriller elements with the inclusion of researchers.

Its structure is also out of the ordinary: Although the first five chapters follow a similar development (a character and his problems are introduced, then the Boy with the Bat attacks), the following are a radical change, showing situations apparently disconnected from what we have seen so far, with the nexus that the Boy shows up at some point. To then conclude in a few last chapters where everything explodes and it is difficult to differentiate what is real and what is not, or if it matters.

Although it seems chaotic, everything has a reason. Through these deceptively self-contained stories, Kon builds a cynical portrait of the ills that afflict human beings and to our society: from excessive consumption to our excessive dependence on new technologies and the feeling of alienation they produce.

Without a doubt, the anime lives up to its title because it is capable of make you experience that constant paranoiamaintaining the tension all the time for fear that the Boy with the Bat appears at any moment and makes you doubt the perception of each character.

Of course, you have to see it with the mentality that it is a work that travels between both worlds, reality and dreams. If what you are looking for is a story that explains everything and clears up every last loose end, look elsewhere. As in his cinematographic works, Kon understands the spectator as one more piece of the audiovisual experience and leaves a lot to interpretation for each person to draw their own conclusions.

With ‘Paranoia Agent’, Satoshi Kon gave free rein to his creativity mixing drama, thriller, terror and dreamlike images, resulting in a unique and special work, which It has earned the label of “cult anime”. You have to come prepared for the experience, because it is one of those that does not give you everything chewed, in addition to the fact that it is not afraid to explore the most unpleasant face of people. If what you are looking for is something that is unlike anything you have seen, you will find it here. It is edited in domestic format and if you want to see it streaming You have it in Filmin.

Line up, date and everything about the festival in Chile