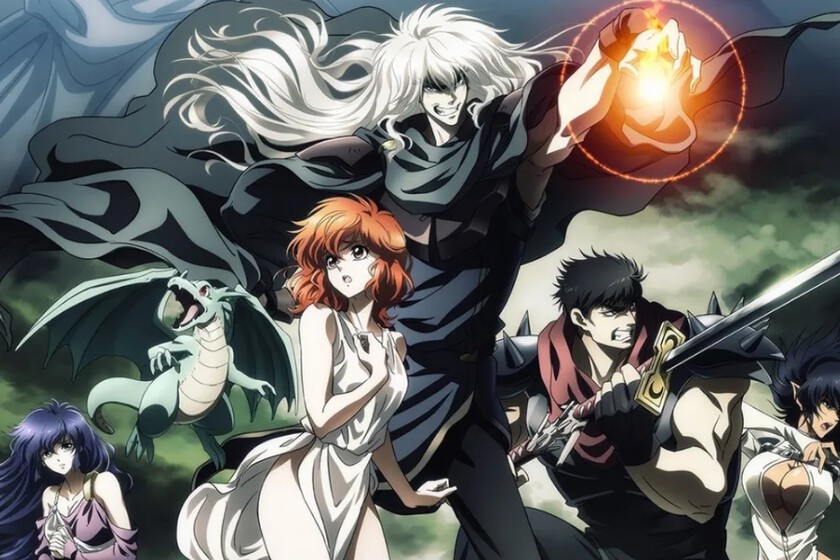 We have officially entered fully into the summer anime season and as Netflix promised a few months ago, it has not stopped releasing new releases every month. To open the summer just hit the shelf ‘Bastard!! – Heavy Metal, Dark Fantasy’a new adaptation of the classic dark fantasy manga by Kazushi Hagiwara.

‘Bastard!!’ It already had a first direct-to-video adaptation in 1992, although the new series will have many more chapters, so in principle it will be able to better adapt the original material. It has already reached us a first part of 13 chapters to introduce us to the fantasy universe of anime.

The anime series It starts by presenting us with a conflict that has been brewing for several centuries and that left the world in ruins with the clash of two monumental creatures. Over the years, the story became legend and a powerful sorcerer named Dark Schneider tried to gain control of the world. The world did not end up destroyed or controlled, because the high priest of Meta-llicana managed to seal Dark Schneider’s soul inside the body of a baby and in principle the only one who can undo the seal is his daughter Yoko.

Since the forces of evil don’t usually stand still for long, Dark Schneider’s former allies rise up again to attack Meta-llicana, leaving its inhabitants’ only hope to awaken the sorcerer’s soul to aid them. What they hadn’t counted on is that Dark Schneider is a true character and a complete egoist, trickster and womanizer.

First of all, it is necessary to warn that ‘Bastard!!’ It’s not an anime for everyone. Although it is listed as a shonen for young readers the series has quite a few doses of very graphic content, especially sexual. In general, the tone is quite well carried, with moments of comic relief spun between battles, but the more explicit parts can become burdensome.

Also keep in mind that the anime is also limited by the original material and we can not ask for pears from the elm. ‘Bastard!!’ it has all the tone that we can expect from a story of its time, with its good points and its many bad pointsand the treatment of female characters as props objectified and conquests of the protagonist is one of them.

Because when watching ‘Bastard!!’ we have to know what we are going for: pure fanservice. Dark Schneider is the real star of the anime, just out of curiosity as to what she’s going to do next and who she’s going to get involved with. Not only that, but for now she is heading very well for us with her character arc and her evolution, with which the sorcerer goes from being a true despicable villain to a sort of hero with his own somewhat peculiar moral code.

Good start, but with patience

This first part of the anime is a good introduction to the kingdom of Meta-llicana and all its vast lore, although it also leaves too much the aftertaste of staying in the introduction and little else.

Although necessary, these first 13 episodes are a succession of new characters and confrontations with them, so it may seem that the plot does not advance too much and that the protagonists are dedicated to going from one place to another without a fixed course.

The good news is that yes, the plot advances and hits its tail towards the final stretch. We already have the foundations laid for the second half of the anime, so now it should be able to focus more on the main conflict that we have been given several brushstrokes about but we don’t see shine at all.

‘Bastard!!’ He promised us a lot of dark fantasy and heavy metal, let’s see… There is dark fantasy and heavy metal, but just enough. We have ninjas, sorcerers, vampires, and creatures of all kinds, but the anime falls a bit short in terms of the amount of action it could give us. The animation is functional, with a very good finish and that puts the meat on the grill in the sorcery battles, but it does not fully exploit the style of the original manga.

Of course, ‘Bastard!!’ It is a series with a lot of potential and whose success will depend on how the following chapters that are yet to be released are developed. Now that we’ve had a good procession of characters, what the anime needs is more time spent exploring the full story and conflicts than we’ve been given a glimpse of.

It has already been confirmed that the anime series will consist of a total of 24 episodes, so for now we have to trust that Netflix will premiere the second part of the season before the end of the year.

Hubble image shows a keyhole in the cosmos

Britney Spears signed a prenuptial agreement before her wedding