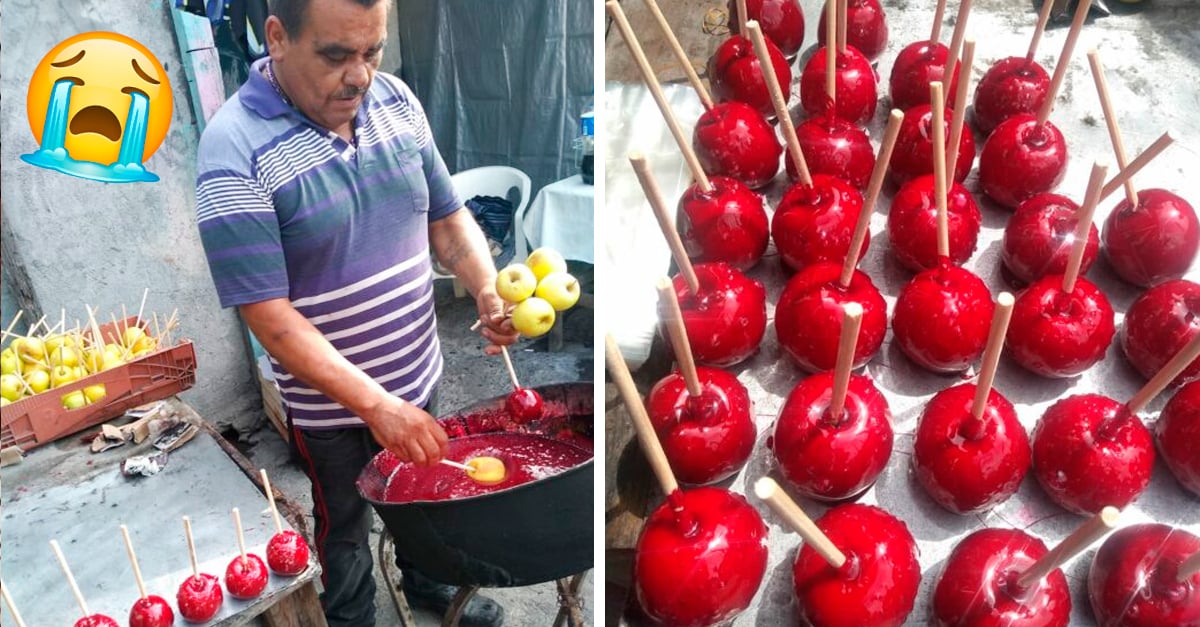 Street vendors are people who mostly live day to day and with the sale of their products, they bring sustenance to their homes. That is why it is important to sell each product of your merchandise and when someone makes an extra order or more than what they usually offer, they see the opportunity to earn a little more money.

However, this is not always the case, since there are people who place large orders and, in the end, end up canceling them. Just like the story of Mr. Enrique, who had an order for 1,500 apples and just before delivery they canceled the order.

Enrique is a merchant from Monterrey, Mexico, who for 35 years has dedicated himself to selling raspados, cotton balls and caramelized apples to support his family. He recently became known because someone placed a large order for 3,000 apples, so the man got down to business. However, just before delivering them, they told him that in the end the order was canceled and they could only buy half of the apples.

The news hit him like a bucket of cold water, since instead of having great profits as he expected, he was left bankrupt and with 1,500 apples to sell, which was impossible to do in a few days.

Disappointed and worried about the failed business, Enrique told his children about the situation, so Luis, one of them, took photos of the apples and shared them in a post on his Facebook account, where, to recover a little of the money invested, he offered them for eight Mexican pesos, when their regular price is 10.

Good afternoon, friends. To offer you apples with caramel at eight pesos. Since they made an order to my dad for 1,500 apples and at the mere hour they canceled them and well, if you could help us to recover some of what he invested, I would really appreciate it.

Adding some delivery points to take the apples, Luis’ post was very well received and in a short time, people began to share and comment on the number of apples they wanted to buy.

Suddenly, the publication became viral and not only in Mexico, but also in other countries, where they began to make their requests to help him with some money. Although they reached the goal and sold all 1,500 apples, they continued to receive messages from users willing to buy from them.

Through a comment, Luis informed everyone that the apples were completely sold out and thanked everyone for their support and purchases. Now, faced with this bad experience, Mr. Enrique has the dream of buying a cart to go out and walk the streets and continue offering his products.

Can you imagine the mixture of She-Hulk with Law and Order?

They cancel the second season of Naomi but approve Gotham Knights

Eurovision 2022 | Chanel makes changes to the choreography and is concerned about the order of the gala: “I’m always first, never secondary”