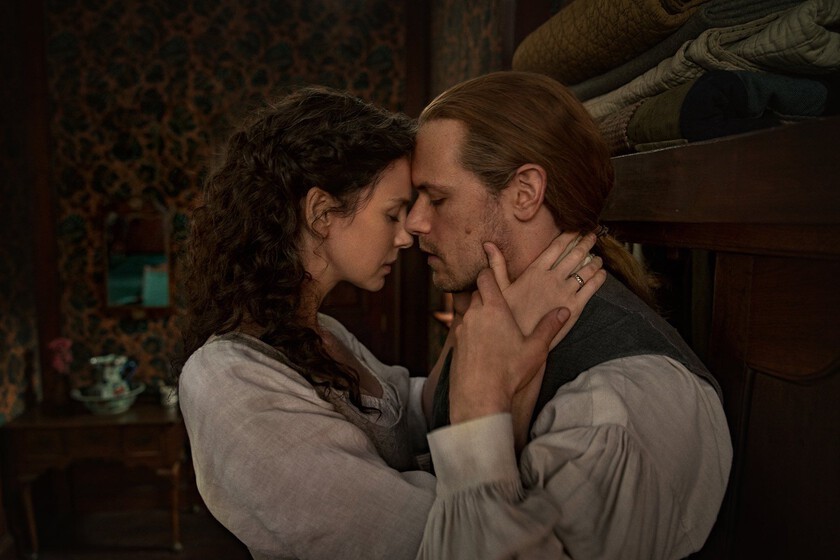 Two years have had to wait for the fans from the series ‘Outlander‘ for Starz to premiere its sixth season, after that pandemic break that has affected all our favorite productions to a greater or lesser extent.

Perhaps when Roland D. Moore prepared the adaptation of the novels of Diana Gabaldon in 2014 (eight years ago, it is said soon) I could never imagine the success of a fiction that knows how to balance with almost surprising success historical facts, adventure, romanticism, fantasy… And that it has one of the couples with the greatest chemistry in the current series.

And I say surprising because I think that ‘Outlander’ is the typical series that can arouse not a few prejudices in those who consider that the motor of love always relieves any production to a lower step in the ranking of series quality.

For this reason, many will be pleasantly surprised with a fiction that becomes strong in what we cannot forgive television entertainment for: dynamism, freshness and that always leaves us wanting more.

Until now, each season of the series adapted a complete novel of Gabaldón’s work. But complications from COVID-19 changed that for this sixth installment. The season has only 8 episodesunlike the 12 that always concern us, which has led to the consequent criticism from fans, who have already warned those who are only spectators that not all the events developed in the novel have been treated.

From here on, be very careful SPOILERSread at your own risk.

The new chapters have been marked by the consequences than gang rape has had for Claire. Although the character played by Caitriona Balfe He has always overcome all the obstacles that have come in his way, this event has changed his life forever.

Perhaps influenced by the visibility and social denunciation that this type of crime currently has, Maril Davis, executive producer of the Show, has revealed that the writers have modified the treatment given to him in the novel. It has been delved much deeper into the emotional wounds that have led Claire to a drift that will have serious consequences in the future of history.

Because the time traveler, whom we have always been able to see as a kind of ‘Doña Perfecta’ and who has been able to introduce the principles of modern medicine in an 18th century too subject to superstition, has fallen victim to her own talent. She has developed an ether that can help her in her medical treatments, but at the time she has turned into an addictin an attempt to make their ghosts disappear.

‘Outlander’ bets on narrative elements that bring it closer to the most avant-garde fictions. to the voice in off de Claire, which is always based on deeper readings than a mere visual description, has joined the presence of Lionel Brown (Ned Dannehy), the ‘leader’ of the men who raped her and who haunts her after death. Gabaldón herself has explained that the presence of this spirit in Claire’s mind is a mechanism that wants to force her to face her problems.

The character of Jessica Reynolds has been one of the big reveals of the season. From the start, we sensed that Claire’s adoration for healing arts hid some pretty evil tendencies.

‘Outlander’ is characterized by getting into all the puddles, not in vain, the characters moved to the United States, knowing (she comes from the future, hey) all the events that were about to take place. And the witchcraft could not remain a simple warning. Malva becomes one of those ‘baddies’ capable of breaking up the Frasers’ marriage when, surprisingly, the story brings us a major twist: the girl is murdered and Claire accused of his death.

One of the most powerful scenes of the season it is that attempt by Mrs. Fraser to save the baby, by slitting open the belly of the inert mother. It is impossible to imagine how hard it had to be for the actress to record this sequence while she herself was pregnant.

Thus, what could have been an almost transitional season towards what the War of Independence will entail, becomes a missile that makes blow up the plotmaking the characters disintegrate and once again turning this series into a great adventure full of those twists and turns that have conquered so many fans.

Who is that man?

How much the series owes to Sam Heughan. It is worth that Claire is the engine of the story, the one who lives the supernatural adventure; but Jamie is, on many occasions, more of a protagonist than she is. And we knew it from minute one, since they tried to play with a love triangle in which, we are very sorry, the character of Tobias Menzies had nothing to do.

Jamie is that seamless hero who knows how to be fierce but sensible, who balances reason, kindness and bravery… who had it all to be the typical goofy potato chip we can’t stand. But Heughan has transmitted a charisma that has taken it much further than we could think.

His weight in the history (of the United States) is perhaps a little too much but we forgive him all, he is Jamie! The season has prepared the ground for that war that will force him to switch sides and betray allies as John Gray (David Berry), in favor of the ‘Sons of Liberty’. While we watched those scenes of secret meetings, of increasingly divided sides, of the presence of a historical figure like Flora MacDonald, somewhat relaxed, tragedy was brewing in Fraser’s Ridge.

The construction of a place that they can call home, of a community in which everyone helps each other, does not have much future in series like ‘Outlander’. That supposed harmony is quickly called into question with the arrival of characters like Tom Christie (Mark Lewis Jones); another very interesting figure who we thought he would be an enemy of the Frasers, but whose sense of justice has conquered us. The Malva’s father is a man full of contradictions who is impossible not to love, because he must overcome the pain of losing his daughter to protect the suspect from killing her.

These latest events have come to save an argument, in my opinion, somewhat weighed down by a choral protagonism that does not always suit the series. We have Fergus, his drinking problem, his suicide attempt; to Marsali and the defense of his newborn child; to Ian and his history with the Mohawks (for the record, the character of John Bell is one of my favorites)… perhaps too many protagonists for only eight chapters.

Although the diversity of characters in the series is proof of their dramatic quality, in this case, it has seemed to me that on many occasions focus was lost towards subframes We will not say less interesting, but perhaps far from the main reason why we continue the series.

Of all these subplots, special mention for two. First of all, Brianna (Sophie Skelton) and Roger (Richard Rankin). They appear as a imitation of Clarie and Jamie 2.0, but I think they are very far from that reference. Brianna is as smart and brave as her mother; and Roger has as ingrained a sense of honesty as Jamie, where is the fault? Honestly, that plot where the marriage is supposedly in jeopardy because a little other than a widow has invited Roger to dinner; and his existential doubts about whether or not he should become a pastor have seemed a bit bland to me.

On the other side of the scale, a character like Lizzie (Caitlin O’Ryan), one of those sweets whose mere presence makes any scene rise. Their polyamorous plot with the Beardsley twins is surprising and fun. It will be very curious to observe how she evolves.

The seventh season, what awaits us

Even before the sixth season premiered, we learned that the series was renewed for a seventh. And luckily, because we have already said that the adaptation of ‘Wind and Ash’ has not been complete and that cliffhanger with Claire imprisoned and Jamie about to be packed up for Scotland had left us on edge.

The seventh round of chapters could have two additions. One is already confirmed, it is the Jamie’s illegitimate son, William Ramson, which will be played by actor Charles Vandervaart. It is one of those characters whose appearance is eagerly awaited by fans of the books. On the other hand, the mysterious identity of that time traveler we hear whistling ‘Colonel Bogey’s March’ may be revealed. The bets say that the character will be Wendigo Donnerone of Brown’s men in the fifth season and who would rise as a new and dangerous enemy for Claire.

And it is not the only novelty for the followers of ‘Outlander’. Last February, we already told you that a series prequelin charge of his showrunner, Matthew B. Roberts, and although there is not much more information about it, rumors suggest that the series could focus on Jamie’s youth or even on the life of his parents. We are looking forward to knowing more.

Note: the first 5 seasons of ‘Outlander’ are available on netflix.

Telecinco gets shot in the butt and clicks with ‘Nightmare in El Paraíso’, the worst reality premiere of the year