‘The Sea Monster’ (2022), review: Netflix brings us a spectacular mix of ‘How to Train Your Dragon’ and ‘Moby Dick’ whose weak point is a predictable script 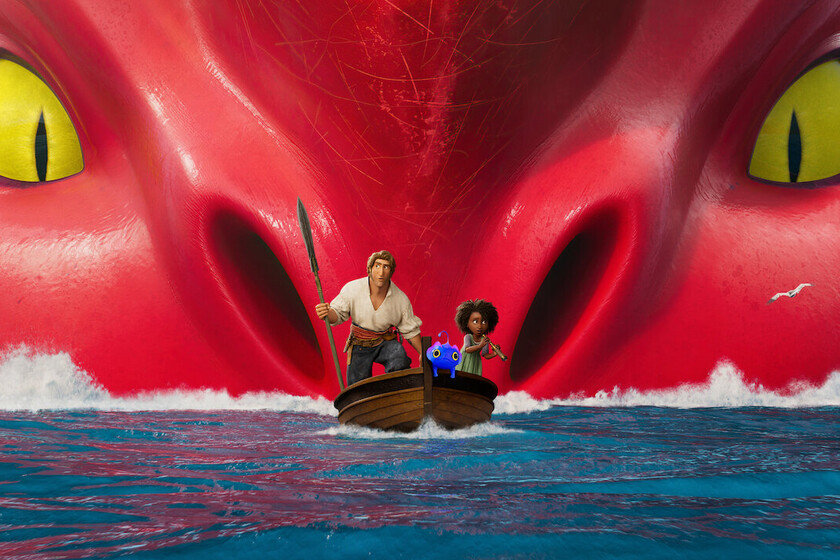 In the midst of a content crisis (and despite definitively canceling films as promising as ‘Bone’), Netflix has become the safeguard of a type of animation that the big studios no longer release in theaters. From reflective works like ‘Apolo 10 1/2’ to returns to slapstick with ‘El gato caco’ or new Christmas classics like ‘Klaus’, there are willing to go further than Disney and Illumination dare to go. Perhaps that is why ‘The Sea Monster’ is ultimately so disappointing.

How to train your sea monster

There are two realities coexisting at the same time inside ‘The Sea Monster’. On the one hand, a bombproof visual style, with some of the most beautiful images we’ve seen on a screen this year. The monsters are cute but effective, the sea is animated like never before, and Regain a sense of wonder and adventure: You want to ride Red and sail that vast ocean, take care of Blue and stay and live in those fabulous designs that are sometimes a bit reminiscent of ‘How to train your dragon’.

It is not the only thing that reminds us of the Dreamworks saga, and that is that the other reality that lives inside the Netflix film is that it’s still an imitation of ‘Moby Dick’ and the first part of the saga of Hiccup and Toothless. In fact, it seems practically telegraphed, gradually sinking the minimally seasoned viewer into a torpor from which it is difficult to get out. The tone is different and the characters have a different personalitybut it’s not enough to take away the whiff of undercover remake from start to finish.

Fortunately, it is able to overcome the inevitable parallelism with scenes on the high seas that are partly reminiscent of ‘Pirates of the Caribbean’: camera movements, action and adventure are spectacular and abundant. They do not leave you wanting more, as is often the case, and Rarely have sea battles been seen so splendidly: It is noted that its director, Chris Williams, has films like ‘Vaiana’ or ‘Big Hero 6’ to his credit, because the perfect balance between the purest action and visual beauty not easy to get.

A hero can also be wrong

One would expect from a movie like this that the comedy would set the tone for the adventure, but it doesn’t: ‘The sea monster’ wants to stand out as an adventure film pure and simple, and only uses comedy at very specific moments. In fact, it is surprising in its seriousness: all the characters have suffered different traumas and lossesand part of their journey is learning to overcome them.

Instead of focusing on having a good time without any complexity with an easily recognizable story, the Netflix tape takes its time to understand the world and the personality of its protagonists. Instead of speeding up the plot to get to the reveal part and the cute little animals, more than half of the film takes place between battles on the high seasgovernment conspiracies and a vendetta reminiscent of Captain Ahab.

‘The Sea Monster’ may have copied the basis of ‘How to Train Your Dragon’, but it also shows that can make a familiar story feel new browsing the details. Her triplet protagonist has an emotional charge that she never hides (beware of the conclusions about heroism and mortality that Maisie reaches) and does not continually try to water down the trauma with funny monsters makes it a better movie than it seems at first glance and elevates it from the category of simple copy.

The film still has time to get into some raging news: the fabrication of fake news and its perpetuation by power. It is surprising that a film aimed at children introduces themes such as propaganda, fake news and the rebellion against them. All this with his good dose of cuteness, of course.

And it is that ‘The sea monster’ It also doesn’t leave out an audience that just wants to see cute monsters., funny pets and girls making faces, but sometimes it seems that he does it more as a toll than with real interest. In the long run, it ends up weighing her down because she feels trapped between two worlds: the one about the serious movie about expectations, rebellion and learning and the one about the movie destined to sell stuffed animals with smiling, slimy monsters with a hypnotic movement.

As a last resort, ‘The sea monster’ has better intentions than quality. It is not a bad movie, and visually it is impressive, but, in the end, its plot copied and pasted from another work makes a dent in it, even though it operates on the margins of that plot and only uses it as a skeleton to create from it. . Impressive in its battle scenes, interesting in its character creation, disappointing in its development.

Test: Who do you look more like: Kimberly Loaiza or Juan de Dios Pantoja?

Madonna reveals her obsession with sex and says she regrets getting married twice!