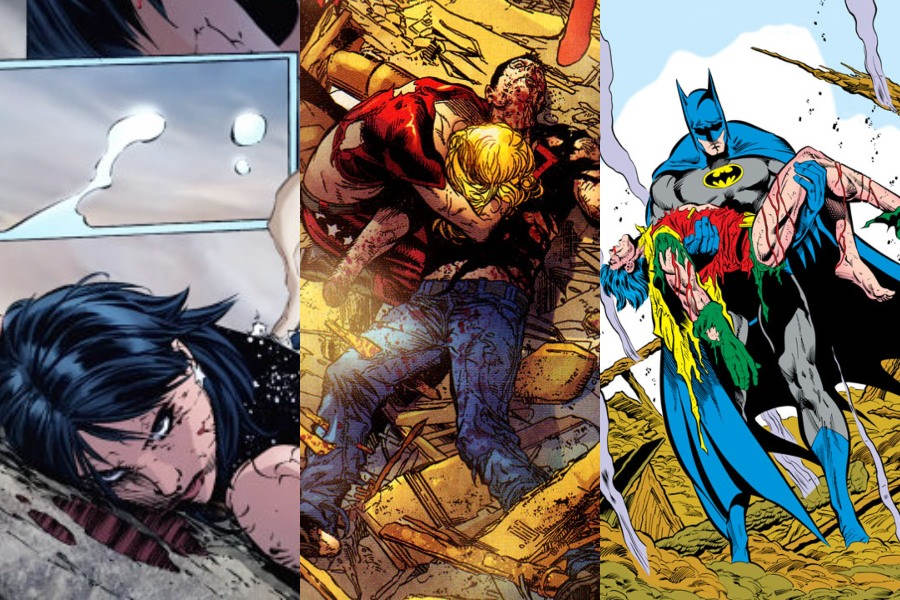 In the DC Universe death is sometimes not final for some characters like sidekicks or companions, but some of these deaths are very brutal.

Beatings, explosions, accidents are just some of the reasons why loyal young heroes have given their lives, either saving other people or becoming victims of chance.

To speak of Roy Harper in the DC Universe is to refer to one of the characters who has suffered all kinds of misfortunes, from being trapped by addictions to losing an arm and witnessing the death of his daughter.

Heroes in Crisis marked the death of Roy Harper, who lost his life at the hands of Kid Flash, in the massacre he perpetrates in the Sanctuary, the place where the heroes seek to recover and relieve post-traumatic stress.

Crisis on Infinite Earths featured two memorable deaths, Supergirl’s as well as Barry Allen’s as the Flash. Let’s first remember how The Girl of Steel dies, in exchange for DC’s heroes coming out victorious.

Faced with a certain defeat that would destroy the Multiverse, Kara Zor-El does not tempt her heart and fights the villain with everything, who, not resisting the attacks of Kal-El’s cousin, has no choice but to flee, but not before finishing with Supergirl’s life. Kara’s death throes is one of the most dramatic moments of all time.

If there is something that has marked Batman, it is the death of several companions who have defended the mantle of Robin, including Damian Wayne, the son conceived by Bruce Wayne and Talia Al Ghul.

In Batman Incorporated # 8 we discover that Talia Al-Ghul has no scruples and orders the murder of her own son, despite the fact that Damian was raised and trained by the League of Shadows as a baby.

One of the most remembered deaths in the decade of the 80s is that of Jason Todd, an event that would not have happened without the support of Batman readers (Do you still doubt the great power of fans?)

After discovering that his mother works with Joker, the villain traps Todd and gives him an epic beating before placing him and his mother in a place that would explode, which would represent one of Batman’s heaviest defeats since death. of Thomas and Martha Wayne.

Some serious mistakes are not handled well by people, reaching extreme situations, and Wally West is a clear example of this, when in Heroes in Crisis the sprinter can no longer face a great depression, which leads him to commit the Sanctuary massacre .

Faced with the guilt he carries at what Wally West himself has just done, he proposes a solution to deal with the pain of what he did and that is to travel five days earlier to meet his younger version and break his neck.

Being in the wrong place and day doesn’t spare heroes from misfortune, and in Donna Troy’s case misfortune comes before victory is achieved.

In an encounter between the members of the Teen Titans and Young Justice, Superbot, an android with the qualities of Superman went out of control causing damage. When Donna Troy finally manages to stop Superbot, he uses her laser beam and kills her.

When we met him in the Kingdom of the Supermen, Kon-El was stubborn and impulsive, like any good teenager, but the Superman clone learned over time to defend justice, and even sacrifice himself for it.

In 2006’s Infinite Crisis, Superman Prime, seeking to rebuild the Universe in his image, attacks Superboy a second time, leading to a brutal fight that ends in Luthor’s Multiverse tower exploding. Kon-El saved the earth, but is left injured, and dies in Wonder Girl’s arms.

It may interest you: Top 5: The most impressive deaths of DCeased

The year was 1988… The Dark Knight Detective’s fiftieth anniversary, and his fans were given the never-before-seen opportunity to decide the outcome of one of the most pivotal storylines. The decision? Keep Batman and Robin as a team, the Dynamic Duo, or return Batman to what he once was: a lone warrior fighting crime.

SMASH and DC Comics Mexico bring you DC Deluxe – Batman: A Death in the Family, a special edition with the story of Jim Starlin and Jim Aparo, as well as the debut of Tim Drake and the contributions of Marv Wolfman and George Pérez

the brutal physical change since I was a reporter at RTVE