the Minions and the long road to the final design that was born… in Barcelona! 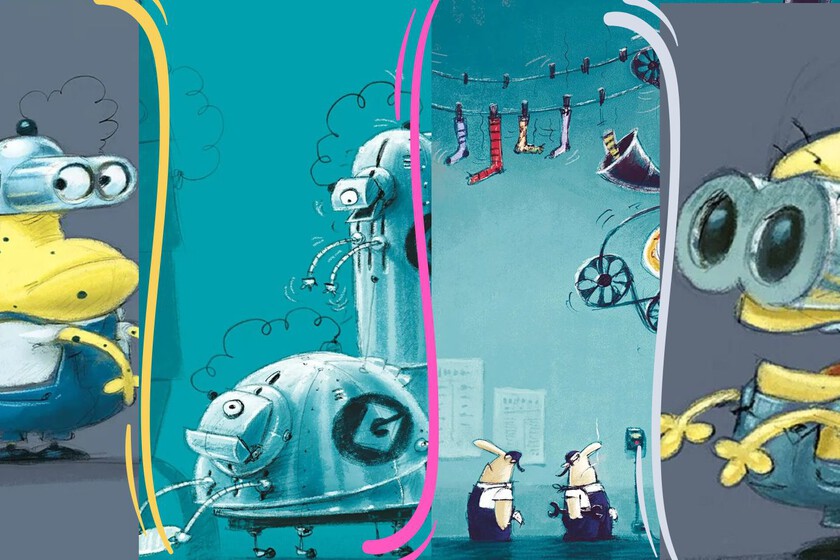 The Minions are to Z what Shrek was to millennials: a repository of nostalgia, memes and union with childhood that older generations are unable to understand. From the parodies of ‘All star’ to #GentleMinions there is not as much space as it seems. But the truth is that today’s kids wouldn’t wear gala suits to see them if it weren’t for a design that was about to be very different from the one we see every birthday when our family congratulates us on WhatsApp. The creation of the characters is much more convulsive (and interesting) than it seems and covers four years of designs and doubts.

From orcs to humans

Not everyone knows that ‘Despicable Me Gru’ was born from the mind of a Catalan, Sergio Pablos, director of ‘Klaus’, who before directing for Netflix worked as an animator at Disney. Pablos based the first script for the film on his own short story, ‘Evil me,’ and he sent it, along with his own designs, to Universal. No one had asked him for anything there and he imagined that it would go unnoticed, but the rest is history.

Before the project passed into the hands of Eric Guillon, the director of the films, Gru was completely alone, so someone decided to add some henchmen as incompetent as they were gigantic: originally they were a kind of wild orcs which would make Gru seem more likeable to the audience. However, in the first tests it was seen that it caused the opposite effect, so they changed them to uniformed clones in the purest stormtrooper style in a veiled parody of ‘Star wars’.

But didn’t finish working either (as we know) until it reached Guillon, who carefully observed the designs and did not hesitate to send them to the recycling bin to start from scratch. The key was not that they were bigger, but smaller. So, neither short nor lazy, Guillon planned Gru’s henchmen to be short humans who would work with him. “They were human, but they were already wearing their blue suits. They were very small, like elves working for Santa Claus,” he commented.

The birth of the robotic Minion

But of course, you can’t just grab humans and slam them into walls, throw them off an eighth floor and expect the entire audience to crack up. That’s why the Minions they reached their next transformation: they would be… Robots! Some strange (and very funny) designs that came from a previous project, in the form of artistic recycling. Robots, by the way, had only one eyea trait that came to indicate a decrease in his wit.

This design would not cause trauma to children when hit, but we couldn’t have empathy for them either, according to Guillon (something that seeing ‘Wall-E’ is debatable, but good). The producers then suggested the key point: What if to eliminate the coldness of the metal but maintain the possibility of being hit all the time, a hybrid between robot and organic matter was created? Several possibilities were drawn with different colors (red, blue, yellow) and the robotic side was left aside.

No matter how many colors they tried, there was one that stood out above the others: yellow. It only remained to decide the origin of these creatures, which we now know very well thanks to ‘The Minions’, but at the time it was not so clear. There were those who proposed that they be created from egg yolks or from a Minions-creating gun invented by Gru. Its origin was ultimately left a mystery. A decade later. the faces of the characters have been on absolutely all the merchandising you can imagine… And ‘Despicable Me 4’ will be released in 2024! Will his popularity end?

And yes, I miss that too parody of ‘Star wars’ with the Minions stormtroopers that we will never see

Gerard Piqué, in love with his girlfriend Clara Chía Martin, arrives with her at Barcelona airport

Star Wars responds like this to a hater on social networks

How to take care of photocards, tips to keep them protected