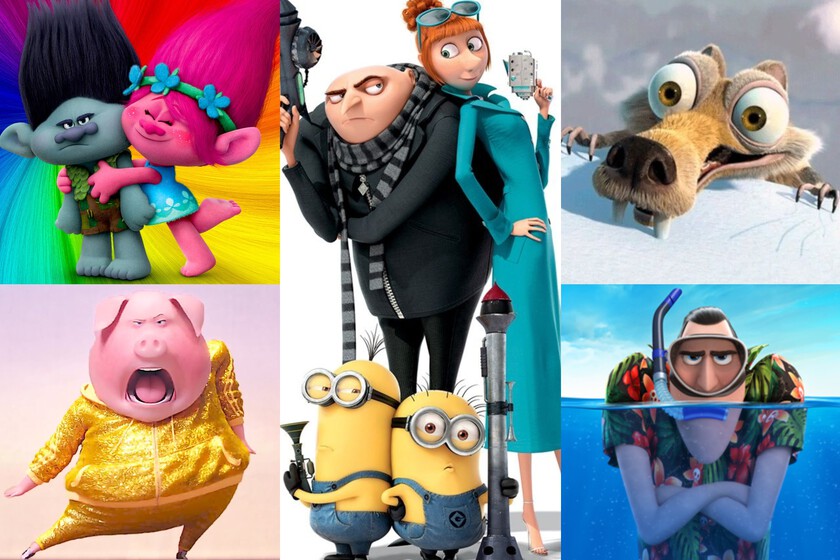 With ‘Minions: the origin of Gru’ triumphing on the billboard, we have a perfect example that, and more in the face of summer, light-hearted movies triumph in which humor is given greater prominence. We bring you several perfect animated sagas to combat those moments of summer heat in which you just want to throw yourself on the sofa and have a laugh with endearing characters. Enjoyable for children and adults.

‘Despicable Me’ and ‘The Minions’


If the occurrences of these little yellow guys and their mini boss made you smile and you still haven’t dared to try the rest of the saga, you can’t miss it the evil plan of this villain in which three adorable girls end up crossing. The trilogy has more sugar than its spin-off but is just as enjoyable and, of course, we have the Minions to provide the thug point.

For family sagas, this tetralogy of classic monsters. Dracula runs a hotel for supernatural creatures here, but his main problem is none other than dealing with the fact that his daughter has grown up, when she begins to be interested in a new guest who turns out to be a human. The fourth is the weakest and the dubbing is not the best, however, the monstrous wacky pranks make each sequel guaranteed entertainment.

One of the animated surprises of recent years is this adaptation of the mythical troll dolls. Here they are presented to us as bright and talkative little creatures, who spend the day singing. His routine will be affected when the Bergens enter the scene, some evil monsters that will shake his calm day to day. Both the first and second are upbeat, good vibes, surprisingly self-aware, and musical on top of that.

If we talk about musicals, we cannot forget another of the unexpected successes among animation. A friendly koala wants to save his theater and will look for the most talented to put on a musical show: Rosita, a housewife whose dream has always been music, Ash, a porcupine passionate about punk, Meena, a shy elephant who sings like the angels… ‘American Idol’ but with animals.

One of the longest-running animated sagas, which has already accumulated six films. It all started with a mammoth, a sloth and a saber tooth taking care of a missing child in the middle of the Ice Age and since then they have had a thousand more adventures. The incorporation of new and hilarious characters make it continue to be worthwhile beyond its first two installments, the roundest in the saga.

The thing goes from remote times. Is nice family of troglodytes It is made up of characters each more diverse and tries to survive the dangers of their times, whether they are the impossible beasts that are on the way or the family conflicts of generational differences.

I couldn’t miss some stop motion and less this gem from the Aardman factory. This gang of sheep takes on the big city in his first installment and comes into contact with a mischievous alien in the second. Children will enjoy its funny visual jokes slapstick while adults will love the constant nods to silent cinema and science fiction respectively.

It is never a bad time to claim that this saga is much more than merchandising meat. In the beautiful first movie we met Liloan orphan girl in charge of her older sister, and his unlikely friendship story with Stitch, a wanted alien who knows perfectly well what it is to feel alone in the world. We can stay there without any problem, but the protagonists of it are so funny that it is a pleasure to follow his adventures in the different sequels.

Obviously, if we talk about extra-long sagas, one of the most successful characters in anime could not be missing. The cosmic cat who tries to help the clumsy Nobita with his inventions he has a prolific film career of 44 films, some of which can be seen in streaming. Like the chapters of the series, the vast majority are self-contained so you can watch them in the order you want and you’ll enjoy them just the same.

We close with one of the funniest reinventions of recent years. The first film knew how to capture that creepy humor of the previous versions of the Addams, that family so sinister that it is not ashamed to be, and bring it to animation. Another cluster of cinephile references that easily make you laugh.

Marlene Favela’s daughter turns 3 and her father, George Seely, reappears with a tender message of congratulations

Marjorie de Sousa shows off her rear by posing by the pool, wearing a chained bodysuit

Luis Miguel prepares his return to the stage with a tour in 2023; affirms businessman Carlos Bremer