The longest night (2022) review: Netflix’s frantic Spanish series is a powerful prison thriller that engages but leaves you halfway 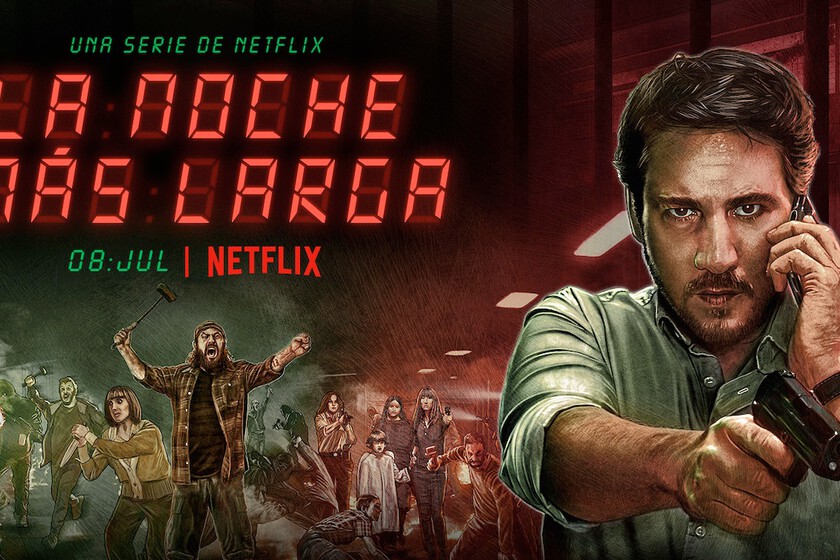 Netflix has released a new Spanish series practically every month of this 2022. The first to arrive was the discreet ‘Fair: the darkest light’, then it was the turn of the ridiculous ‘Once upon a time… but not anymore’, improving the thing in a remarkable way with ‘The heirs of the Earth’.

With ‘Welcome to Eden’ they achieved notable success despite how disappointing it was in artistic terms, while ‘Intimacy’ has also worked very well, being also a miniseries that goes from less to more. Now it’s up to ‘The longest night’, a thriller that explores the assault on a prison to try to take one of the prisoners. For this, prioritizes a vibrant rhythm with which it engages the viewer. Pity that later it is to leave him halfway.

No beating around the bush

And it is that the first important detail that the viewer should know is that we are not facing a closed series. A priori it might seem that it is an intense six-episode miniseries that goes straight to the point, but at the moment of truth we are facing the first season of a series that is not guaranteed to continue. All in all, it seems to be better than most of the Spanish series on the platform.

Of course, ‘The longest night’ never goes off the rails, not even in the first episode, which is the one with the greatest expository load, having to present both the main characters and the situation they are going to have to face. face. Already then a direct approach is noticeable, giving the right information about his characters so that everything reaches the point where chaos begins to unleash. In addition, it has the curiosity of being located in the middle of Christmas Eve, something that helps to give a different energy to the story, although later that is something that it never fully explores.

This results in the touch of mystery never fades, which helps to enhance the threat posed by both the assailants outside and the prisoners inside who decide to mess it up their way. The sensation of a pot about to explode grows thanks to this second point of stress, but it is fair to point out that this is where the series is somewhat more obvious, in part because the dialogues do not end up having the necessary naturalness so that it does not feel so much as a narrative device rather than something that flows within the series itself.

The hits of the vibrant

However, what does not remain is in the most frenetic side of ‘The longest night’, because those responsible seem more interested in turning the series into an adrenaline shot than in anything else. This has two direct consequences. The first is that the threats are carried out. Here they don’t mess around with saying we’re going to kill such and such and then it comes to nothing. It is true that for now it affects characters with little relevance, but it is fair to point out that it feels like something refreshing within this type of proposal.

The second is that the self-imposition of not giving the viewer respite sometimes works against them. And it is already difficult to get something like that in a movie, because there simply comes a point where credibility is blown up, depending on how hooked one is, to more or less overlook it. Without going into details, again they are events inside Baruca, the psychiatric prison in which the action takes place, where that search for primary reactions does not always work well.

That could be partly because some characters aren’t satisfactorily profiled, which translates to us not caring too much about their actions and sometimes feeling like more of an excuse to add tension than anything else. In return, Louis Callejo Y Jose Luis Garcia-Perez they provide the necessary dose of conviction so that one never gets to detach from the screen. Of Albert Ammann I prefer not to say much, because he has never been an actor to my liking, beyond the fact that at times he seems to be channeling the same interpretive energy that he used in ‘Cell 211’. With less satisfactory results, yes.

All in all, what Netflix has given us for now with ‘The Longest Night’ is an incomplete work, to the point of feeling more like it has been split -at least- into two instead of structuring it into seasons. I will not deny that leaves with curiosity to know how everything is resolved, but also with a certain bad taste in the mouth because this asked to give everything at once. And considering that there are six episodes that we have been able to see, they have a bad excuse for not having done it.

‘The longest night’ is an entertaining thriller that bets on primary reactions instead of giving things too many turns. This leads to a very lively rhythm in which some decisions of the script work better than others, but none remains so much as to kick you out of the story concocted by Xose Morais and Victor Sierra, the same duo behind the estimable ‘Néboa’. Now I just hope they give it closure, because not doing so would be unforgivable. Because leaving you a little in the middle when it comes to the characters can be overlooked, -and that’s where it seems to me that the same thing will continue to happen in that hypothetical second season, even if they give some kind of closure to their arcs- but doing it with the story itself no longer.

Kanye West criticizes Pete Davidson again, whom he describes as a “heroin addict”

fleece jumpsuit for less than 24.99 euros at Women’Secret

One of the biggest failures in the history of science fiction cinema presents its unexpected prequel: trailer for ‘RIPD 2: Rise of the Damned’