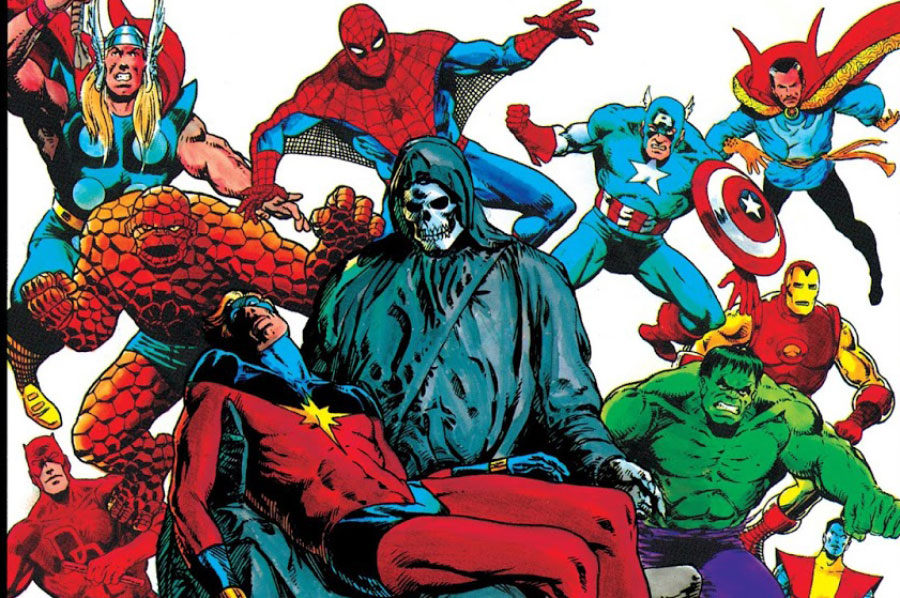 The history of crossovers between companies is rich, but a huge event like The Death of Captain Marvel had a hidden “super” cameo.

Officially, Gerry Conway and Ross Andru’s exemplary Superman vs. The Amazing Spider-Man kicked off the crossover between the Marvel and DC companies in 1976. And although “unofficially” writers Steve Englehart, Gerry Conway and Len Wein with writer Glynis Oliver introduced hidden appearances of him in Amazing Adventures, Thor, and Justice League of America in 1972 (you can read the story here), in 1982 the graphic novel The Death of Captain Marvel had a Superman cameo that no one noticed.

The volume narrates the end of Mar-Vell or Walter Lawson, the character who first carried the alias of Captain Marvel and was a creation of Stan Lee and Gene Colan for Marvel Super-Heroes #12 of 1967. This Captain, despite his Kree extraterrestrial origin, discovers that his exposure to a gas called “Compound 13” has given him cancer.

Accepting his final destiny, many of his allies visit him to say their last goodbye. Even the villainous Thanos helps him cross over to the other side.

At his death, many of the great heroes gather to bid him a final farewell. And on the page that closes The Death of Captain Marvel: The Graphic Novel, by Jim Starlin, we see the group image of the vigilantes firing his friend.

And although it went unnoticed at the time, on the right side of the image, behind Nightcrawler, Wolverine and Starfox, you can see Superman’s face, with his characteristic curl in his hair, and in the lower part part of his cape and his boots.

So in addition to marking an attention-grabbing event in its own right, The Death of Captain Marvel also contains a surprising hidden cameo.

Earth’s mightiest heroes await you in our online store with:

Adam’s true self is revealed…and the most dangerous hero on earth rises!

As the team confronts the Destroyer of Worlds and discovers the looming threat to the world of the Avengers, the hidden connections between the events in Avengers and New Avengers slowly come to light. What good is the White Event if it destroys the planet it was meant to transform?

Also, the Canadian super-team Omega Flight loses its way in the Original Yard and the Avengers will discover why “adaptation” is the scariest word in the Marvel Universe! And later, as Shang-Chi battles an old foe, the Avengers… hang out at Hong Kong’s fanciest casino? Very soon they will realize that it is not worth betting on the spy business.