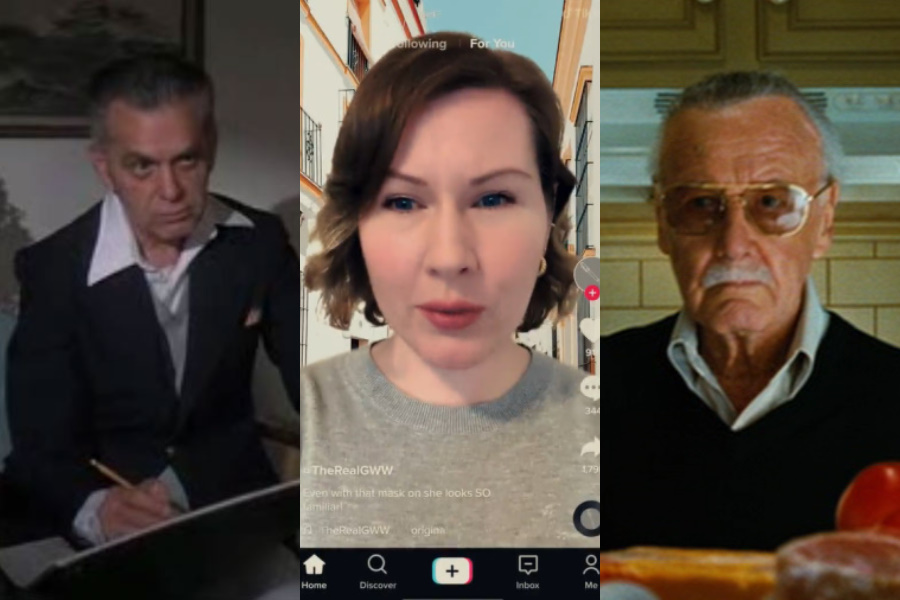 The Marvel movies and series not only take what is published in the vignettes to another level, The House of Ideas has also honored the different authors who have passed through its ranks with an appearance or brief cameos.

Do not miss: Charles Xavier and the best cameos in Marvel cinema

If you thought that Stan Lee was the only author with a cameo (we correct, more than 40 cameos in life), you need to see this list that we have prepared.

In 2014 G. Wilow Wilson along with Sana Aramat handed us Kamala Kahn, who became the fourth woman to wear the mantle of Ms. Marvel, and the first of a Muslim origin in Marvel history.

The writer had her moment of glory in the final episode of the first season of Ms. Marvel, appearing as part of the people who reacted on social networks to the appearance of Ms Marvel in Jersey City.

Few people have made their mark on the God of Thunder like Walt Simonson. His work on Mighty Thor led the hero to the best of his exploits. Spanning epic tales of heroism and betrayal, love and war, Simonson’s work is often considered the definitive Thor.

Simonson is part of the Asgardians who celebrate the return of Thor and the victory of the God of Thunder over Loki.

In 1991, during his time in The New Mutants (title that later became X-Force) Rob Liefeld and the Argentinian Fabian Nicieza gave us one of the most irreverent mercenaries in the Marvel Universe, Deadpool

Liefeld appears in the first Deadpool tape, when Wade Wilson enters the bar, and the author of the Merc with a Mouth is at the bar.

Len Wein was another of the men who left their mark on the X-Men’s stories and mythology, creating Storm, Colossus, and Wolverine, to name a few important ones.

Wein makes his appearance as a congressman in Days of the Future Past, where Bolivar Trask exposes the importance of supporting the Sentinel program.

The man behind stories like The Infinity Gauntlet, and responsible for the creation of Drax or Thanos in the Marvel Universe, also received recognition in cameos within the MCU.

Starlin appeared as part of the support group in Avengers: Endgame, alongside Joe Russo, in one of the scenes where Steve Rogers shows the advantages of surviving the snap.

To speak of Chris Claremont in the mythology of the X-Men is to refer to one of the men who gave his identity to the mutant title, thanks to important stories such as Days of the Future Past and Dark Phoenix, which reached theaters. .

In fact in both tapes Claremont makes brief cameos, in Days of Future Past he is a congressman, and in Dark Phoenix Claremont attends the gala where Charles Xavier is decorated.

Brubaker is responsible for one of the most interesting stages in Captain America, especially the one that returned Bucky Barnes to the Marvel Universe, now turned into Winer Soldier, the executing arm of Hydra.

Brubaker made a guest appearance in Captain America: The Winter Soldier, as one of those responsible for erasing Bucky Barnes’s memory.

The rebirth of Thor as the God of Thunder we thank Joe Michael Strazcynski, one of the most controversial authors in Marvel, for being the architect of Spider-Man: One More Day, which erased the marriage between Peter Parker and Mary Jane Watson.

Straczynski appeared in the first Thor film as one of the New Mexican townspeople trying to lift Mjolnir.

One of the creators who were pioneers in cameos was Jack Kirby himself, who was the one who, thanks to his strokes, defined the course of the modern era of Marvel, being the one who designed characters such as the Fantastic Four, Hulk, Thor and creator of Eternals.

Kirby appeared in episode 31 of The Incredible Hulk series, as a police cartoonist who helps in a case involving David Banner.

The cameos of the authors of Marvel would not be understood without the appearances of Stan Lee. Whoever has seen the films and series of The House of Ideas and does not locate the famous and expected cameos of The Man is because he has lived in a cave.

From The Incredible Hulk series to Avengers: Endgame, Stan Lee’s appearances were an event within the same Marvel productions.

You can also read: Top 10: The best Stan Lee cameos outside of Marvel

Are you a superhero and looking for a lawyer? Call She-Hulk