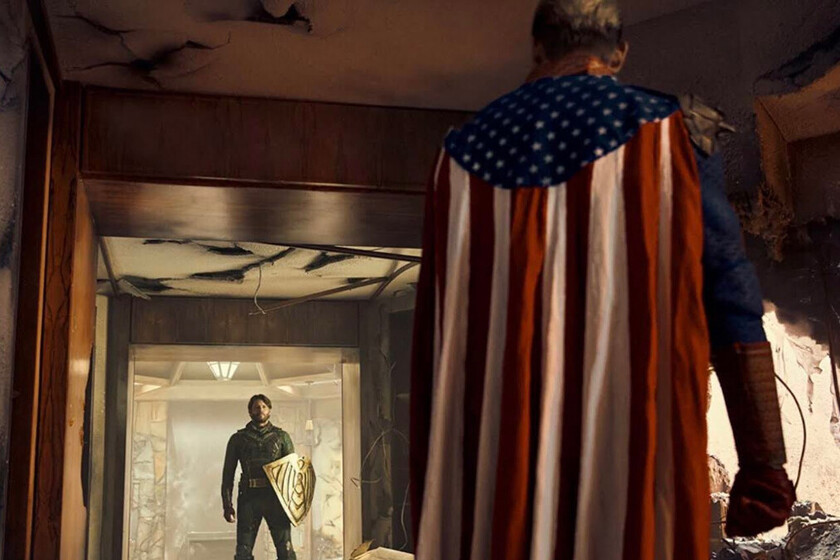 
There’s a warning for everything to appear at the beginning of the episode, but those who wanted the Herogasm to last the entire episode may be disappointed, especially since the event doesn’t take place until about halfway through. And yet, the most shocking moment of the whole hour is when A-Train kills Blue Hawk by dragging him along the ground at super speed in a very savage kill. that mimics a classic of ‘Dobermann‘ (1997).

The Herogasm becomes a backdrop for the best showdown of the season (and series) yet, as Soldier Boy and the Patriot collide. Jensen Ackles tells him it’s “a cheap fucking knockoff” and Ackles replies that it’s “the upgrade”, two sides of the same coin, each Vought’s golden boy at different times, now facing off. And the scene is up there because initially we have a supe who can match Antony Starr’s villain, and the fight gets even more epic when Billy Butcher gets involved.

Fortunately, the Herogasm doesn’t focus on all the action and we get a lot of plot advances from a season that was getting a bit self-absorbed. Mother’s Milk reveals to Starlight that she hates Soldier Boy because she killed his family by driving a car through his house during a robbery gone wrong. Kimiko and Frenchie manage to escape Little Nina’s clutches, killing her in a shocking scene of violence, without using her powers. Also, at the end of the episode Starlight chooses to take her destiny regardless of the consequences..

After many episodes in a dual role that was incomprehensibly dragging on, he denounces Vought, revealing that Soldier Boy is alive and that the patriot has been lying to the public in an Instagram live, and standing in front of the Herogasm massacre, tells him to the world that renounces. This is going to have consequences and propels the series, finally, to another phase. However, the best scene of the episode happens right at the start, a parody of the most embarrassing viral moment of 2020.when COVID-19 began to block countries.

Gal Gadot and a handful of celebrities including actors Natalie Portman, Amy Adams and Mark Ruffalo covered John Lennon’s ‘Imagine’ to inspire the world. ‘The Boys’ have put their own spin on the video with a hilarious skit to open the episode. And along with Profundo and several members of the seven appear some of the stars like Patton Oswalt, Josh Gad, Mila Kunis, Ashton Kutcher, Elizabeth Banks, Kumail Nanjiani, Aisha Tyler and Rose Byrne laughing a little at his fellow supporters.

‘The Boys’ has achieved its best episode of the season, restoring a bit of the lost emotion and making sure that its provocation is not a smoke screen for the lack of movement, finally the great orgy of superheroes is not so scandalous, but it does manage to show the puritanism associated with the king genre at the box office in just one hour. But in addition, episode 6 is violent, fun and continues to break new ground, despite the fact that it is a series that tends to stretch its plots, it has shown that it is one of the bravest series on streaming television.

The Lord of the Rings: The Rings of Power (1×04): summary and analysis of The Great Wave, fourth episode of the Amazon Prime Video series

Did! Rosalía stars in the new SKIMS campaign

The Bolivian electric car that will arrive in Mexico in 2023

The most beautiful (and original) pants for this fall are these from Springfield, word of María Pombo