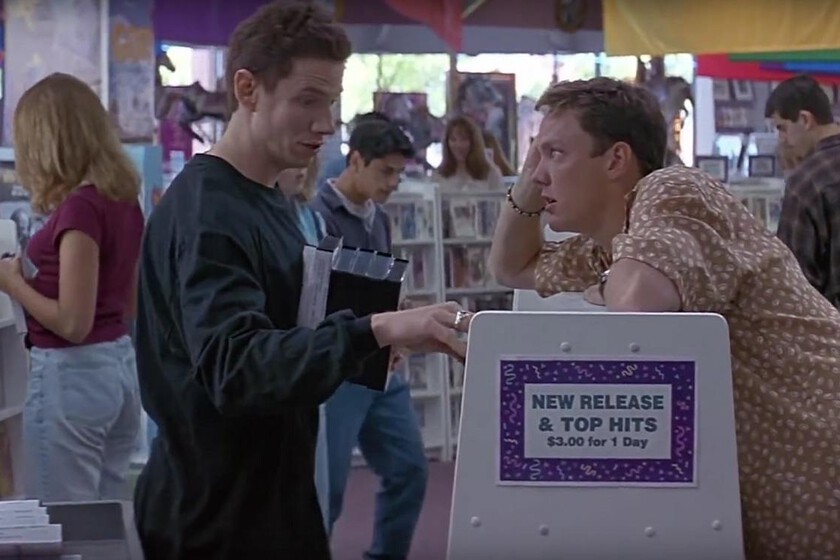 Take risks as a consumer

In the 80s and 90s, to rent a tape you hadn’t heard of, you had no choice but to take a chance based on the cover, the synopsis and the title. And he taught us something about the cinema: sometimes, your favorite films are those that fall into your hands by chance and end up watching simply by discarding them. The video store was not, as many would have us believe, a temple of cinephile knowledge: it was rather a cinephagous combat arenain which between second-rate Italian cinema that was posing as a sequel to a well-known film and third-tier slasher, classics from the nouvelle vague or Alfred Hitchcock could sneak in.

Who did not come home with a movie that they had rented to amortize the trip and ended up falling in love with it, repeating it every so often? ‘Heavy metal’, ‘Hellraiser III’ or one by Bruce Lee could fall into your hands and find that, beyond what you had gone looking for, there was a whole world waiting for you. The video store encouraged the mystery, the search… And along the way, why not say it, it made you swallow a few clunkers that taught you not to trust anyone. The “You lack street” in celluloid version.

Thirty years have passed, but the way we consume cinema is very different. If we don’t go to what we already know we want to see, before choosing each movie we consult FilmAffinity, IMDb, we ask on Twitter, we put it in “My list” and we end up deciding between what the algorithm has selected for us.

There is no risk, there is no interest in going further: To find things outside your comfort zone you have to be the one actively searching. It is a model with which you will be happier: you will always find what you like, but losing along the way the sense of wonder, of finding jewels that you did not know and with a convenience that doesn’t do more minority films any good that they have to fight much harder to be noticed. And it is no longer worth attracting attention by titling your film ‘Alien 2’ to see if you scratch something.

If you were a certain type of teenager, you will perfectly understand the following sentence: working as a video store clerk was the closest thing to a dream job. Living between films, talking about cinema, commenting on the latest releases and the classics. These conversations were, many times, more interesting than the rental itself: the automatic kiosks gave us freedom and facilities, but they took away our human value. The beginning of the end.

This cinephile conversation seems to have moved to Reddit and social networks, where, with few exceptions, the topics revolve around Disney franchises, the blockbuster of the moment, and some staple ’80s classics. Other than that, it’s a wasteland. Missing that authority figure recommend you wisely and personallydiscovering new worlds that you had not even considered.

“Did you like this movie? Well look, why don’t you take this one, which is in the same style but better?” it is basically what the algorithm does, but without knowing what it is talking about. An algorithm doesn’t care about quality than he’s recommending, he just wants you to watch one more movie. Whether you like it or not matters rather little as long as you’re still on the platform, trapped in an infinite loop. Lack of human value, community, talks: Streaming platforms, as hard as they try, remain as cold as they are robotic.

There was something nice about the routine of approaching to rent a movie: learn the offers wellgo with an open mind because possibly what you wanted would be occupied, remember to rewind the tape, marvel at a fascinating physical and tangible world… And yet, would you go back to that? I frankly don’t.

The platforms may be robotic, do not encourage adventure and still have basic classics yet to be released, but they do have something that the video store will never be able to compete with: an endless catalog full of weekly releases in which you will never, ever go without seeing the movie you want. And without leaving the sofa! No matter how idealized we have the video store, going on a rainy day, escaping from the comfort of home after a hard week of work or having to take the car they can’t compete with the simplicity of choosing from our command.

to the platforms still they have a long way to go to get closer, even by a distance, to the most positive part of the video store experience, but going back is impossible. Will we see a more personalized experience in the future? A call to cinephile adventure? Will streaming become something more than that simple catalog to walk through for hours and will it have a special place next to the Videoclub Paco on the corner? Who knows. We probably have no choice but to miss himbecause those times, together with a way of understanding cinema, will not return.

Lying on a couch, Aneliz Aguilar shows off her rear by wearing a black bikini

Telecinco gets shot in the butt and clicks with ‘Nightmare in El Paraíso’, the worst reality premiere of the year