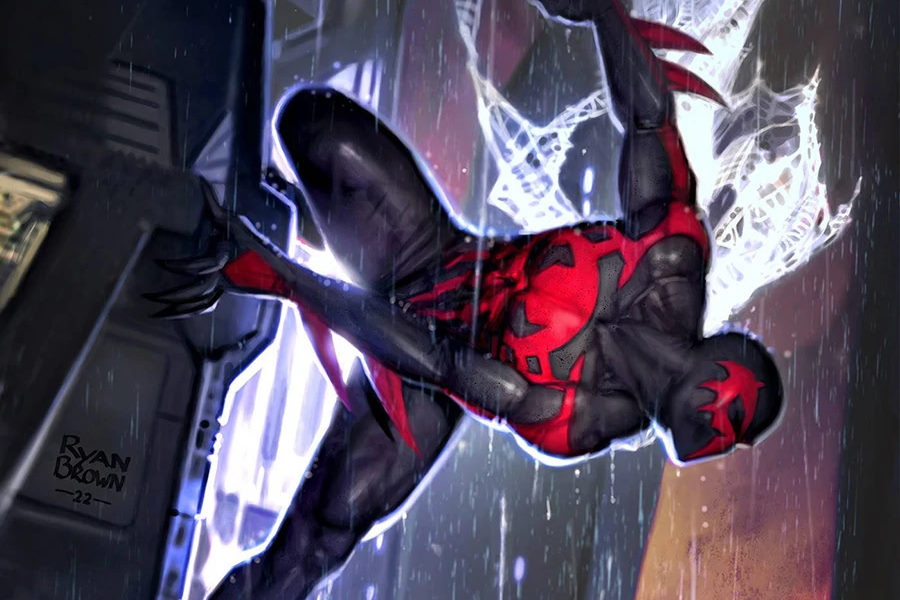 The framework of the first three decades of existence of Spider-Man 2099 offers us Exodus, a story that exploits the dystopian future with the return of an old acquaintance

Through the vignettes perpetrated by the talented Paul Fry -Star Wars: Life Day-, with the white light embracing everything, giving a spectral appearance to both the architecture and the silhouettes of the beings that roam the streets between buildings that take It forms with brushstrokes of pale colors and they are lost in nothingness, as if it were a metaphor for the limits that blur between the digital and the corporeal.

Slightly referring to the style of nostalgia and architectural rationalism typical of the work of the legendary American designer Syd Mead -responsible for the designs of Blade Runner-, it is that this new look at the futuristic concept that Marvel debuted at the end of the last century finds identity, and of the which Spiderman 2099 is the representative title par excellence.

It is a reality whose communion with technology seems to push it to the brink of dematerialization and keep its inhabitants in a permanent state of orphanhood.

That is where this New York is built that has already seen the Avengers die and suffers the designs of a powerful organization calling itself The Cabal, which remains hidden in the heights but makes its unhealthy presence felt even in the depths of every corner. A city where the link with the dispossessed gives a new meaning to the wild and ambiguous existence of the old Ghost Rider 2099, and consolidates his protagonist as a beacon of hope.

Because despite his stormy past and unorthodox methods, Miguel O’hara is Spiderman, and like the original version, he doesn’t shy away from his responsibilities, just as he can hold the entire city on his shoulders if necessary, too. may be able to lead a possible revolution, as in this case.

Quickly establish such guidelines and increase expectations regarding the identity of the leader of said group behind the threat that also involves the fall of a Celestial, without resorting to long lines of dialogue, taking advantage of such a suggestive scenario of wilted dystopia, becomes the great success of screenwriter Steve Orlando -Monsters of Gotham-.

Because it is in this way, without the plot losing its sustenance, that the visual feast finds free rein in this solid and promising first installment of the Exodus event, which arrives to celebrate the 30th anniversary of the first appearance of the already classic arachnid character of Mexican descent, on his way to meet a deranged old acquaintance supervillain.

Travel to the future with Spider-Man 2099: Exodus

Miguel O’Hara is back! After fighting battles across the timestream, Miguel O’Hara finally returns to defend his present and our future. For Spider-Man 2099, the only constant in New York life is change.

So, after a massive celestial body crashes into the wastelands outside of New York, a new Garden of Eden emerges from the crash site and offers unimaginable power.

SMASH and Marvel Comics Mexico bring you Spider-Man 2099: Exodus. An event you cannot miss in our Marvel Weekly format.

Cole Sprouse talks about the traumas of being a Disney star

11 necklaces for guest looks for less than 20 euros