She made her prom dress out of her Harry Potter books. 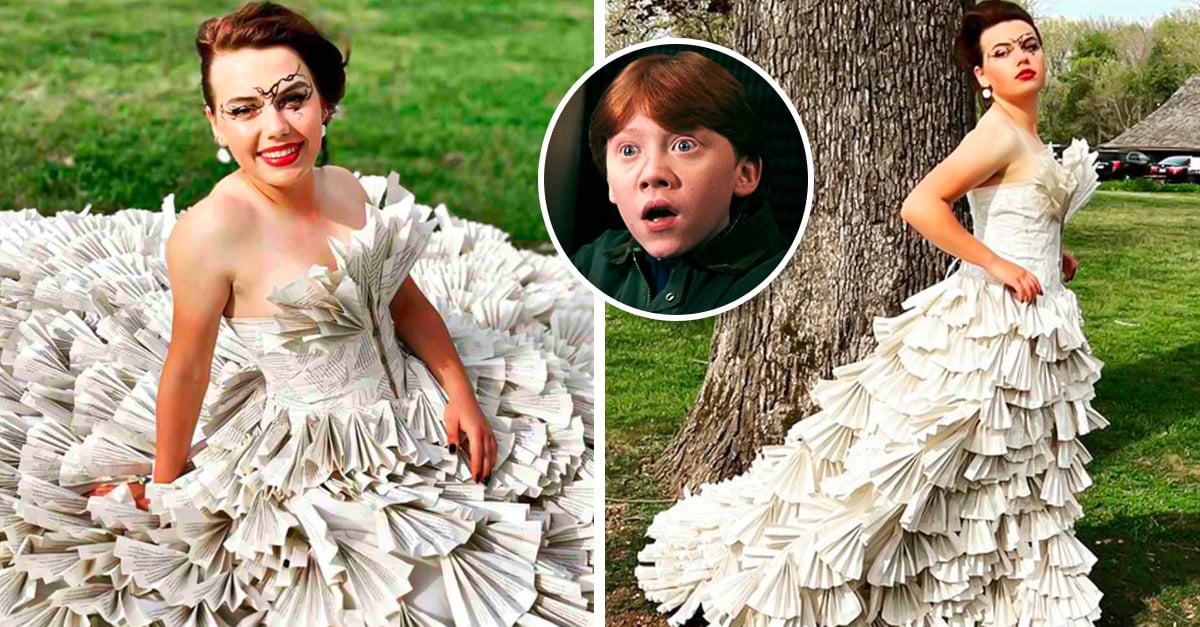 When we have articles and things that refer to our tastes and interests, we try to save or treasure them as the most valuable thing we have in life, so thinking about the idea of ​​getting rid of them is not an option.

But apparently not all of us think so, or at least this teenager sees it from another perspective, since she used the leaves of her two favorite Harry Potter books to design and make her own graduation dress.

We are talking about Hailey Skoch, an 18-year-old student at Prairie Grove School in the city of Arkansas, United States, who, being close to her graduation party, came up with the brilliant idea of ​​designing and creating her own dress with hundreds of pages of the books of Harry Potter.

The fan of the favorite magician of many, with the help of her mother Valerie, who is a seamstress, without using fabric, it took approximately four days to tear, fold, sew and paste pages to make the incredible dress.

My mom was key in getting the actual design to come together. She just helped me put everything together with the corset and gave me some great ideas for the bodice.

The strapless dress with fan-folded pages sought to reflect the identity of Hailey, who from a very young age has been fan from the saga of the fictional magician played by actor Daniel Radcliffe. Those books are very special to her, since they were her refuge and helped her overcome the difficult stage she went through during her parents’ divorce.

For me, this is a piece of art about growing up and transitioning to my adult self while using the words that brought me so much peace in my youth.

The girl assured that during the hours it took her to assemble her dress, she took the opportunity to watch the eight films of Harry Potterand as if that were not enough, he also saw the two tapes of fantastic animals, derived from the saga.

Inspired by a similar outfit she saw on TikTok, Hailey gave her own style and complemented the outfits with an updo hairstyle and incredible avant-garde dramatic makeup, inspired by the Victorian era.

She was the sensation of the party, and since she arrived she left everyone surprised with her emblematic dress, for which she received many compliments from both her classmates and the teachers.

It was the craziest feeling I’ve ever had. Remember when Hermione Granger showed up at the Yule Ball as heartthrob Victor Krum’s date, leaving her fellow Gryffindors nearly speechless? It was probably a lot like that.

Shortly after Hailey shared some photos posing in her dress on her Instagram, her dress went viral and got thousands of likes and endless comments in a couple of days.

This may be the first time someone has undone an item they love so much to give it a completely different use, but no less important. We are sure that she put so much love into that dress, that without a doubt it became her favorite.