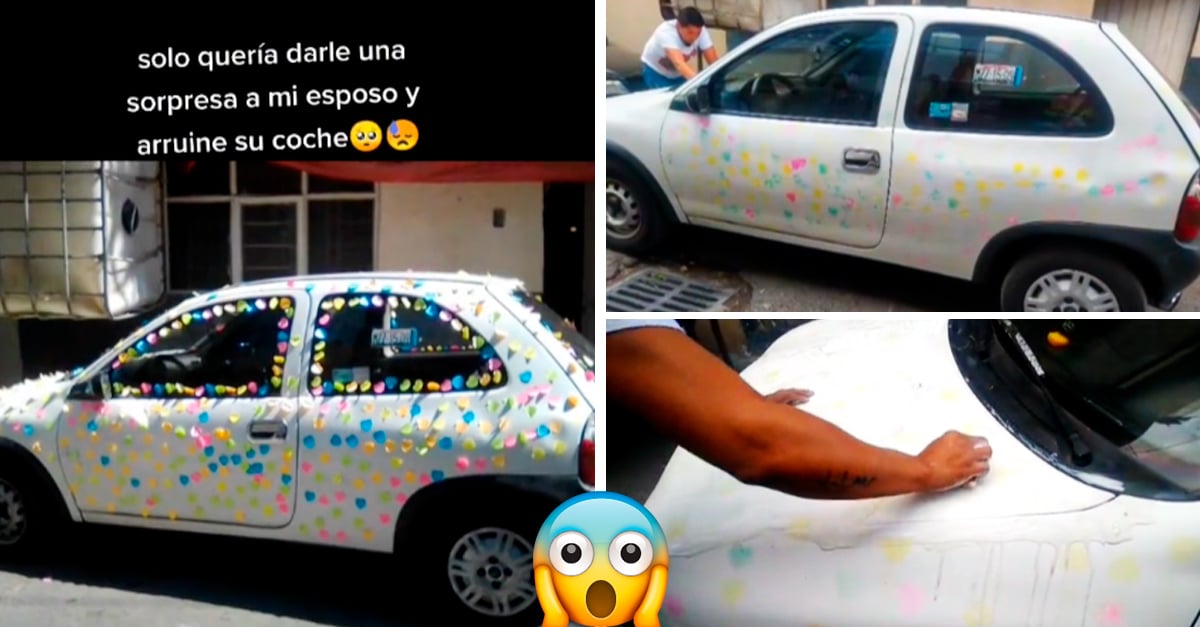 As the years go by, surprising our partner with a gift is increasingly complicated, especially when we have been in a relationship or marriage for many years, because ideas run out and we have to resort to extreme creativity to get out of the ordinary, even if that means that not everything goes as expected.

As it happened to this girl, who in her attempt to surprise her husband with a different and special gift on Valentine’s Day, was surprised when she ruined her lover’s car.

Ceci de Jesús became famous on her TikTok account, although not in the way she would have liked. It turns out that through a short video, she shared with her followers that on February 14, in her intention to give her husband a gift, it occurred to her to fill his car with small colored adhesive sheets with letters and phrases in which She told him how much she loves him.

However, the girl never imagined that her detail would ruin the paint on her husband’s car. During the recording, she put some images in which you can see the man remove the post it of the car and how these left color marks on the car.

I just wanted to surprise him for Valentine’s #car wreck.

Apparently the marks weren’t easy to remove. In the clip you can see Ceci’s husband cleaning and trying to remove the traces of the sticky notes from the car’s paint, but without much success, because no matter how much he carved, they were still visible.

The unsuccessful gift of this girl did not take long to go viral and immediately generated millions of reproductions, as well as comments from men who appreciated the girl’s intention, but said that it was not fair that she had put her husband to clean for something that she caused .

But that was not all for the poor car. Sadly, a couple of days after removing the confetti color, Ceci said the vehicle was hit by two stray bullets, causing the rear window to shatter completely.

So now you know, if you are thinking or have thought about decorating your boyfriend’s car with colored paper, stop, there! We hope that what happened to Ceci will serve as an experience for you and don’t do it.

He crashed his car while showing off his driver’s license.

She danced with her husband’s cardboard cutout at their wedding; he did not go