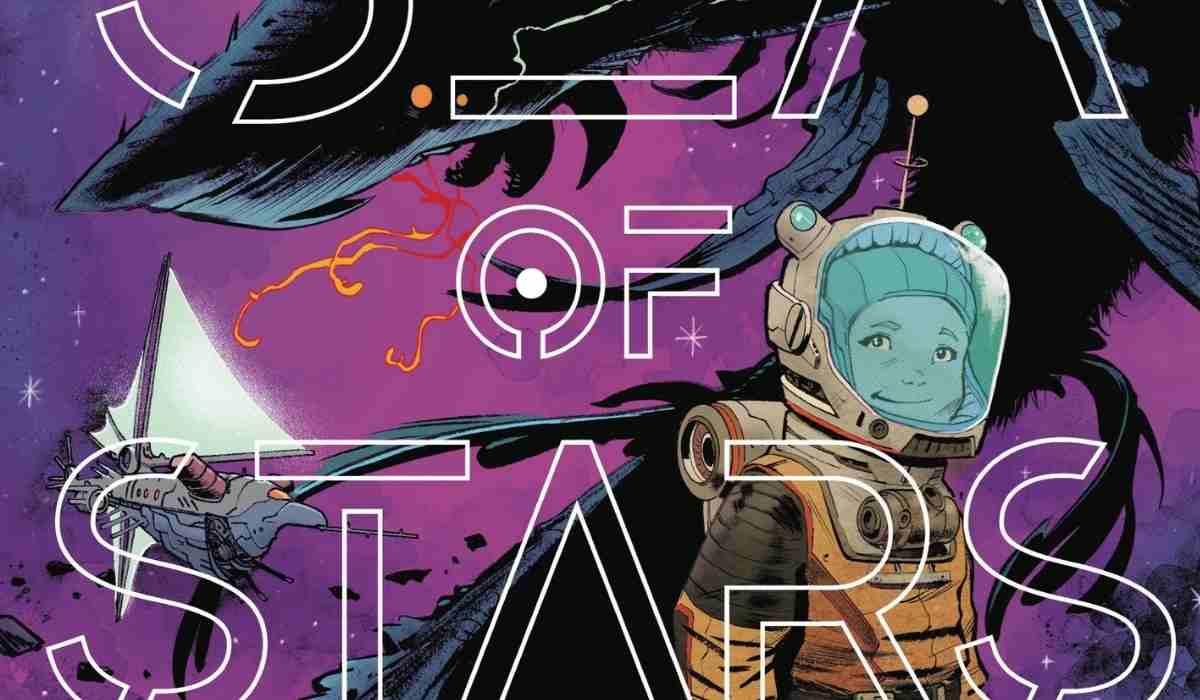 Sea of ​​Stars, the new series from the creator of Thor Goddess of Thunder, transports us to space in which a father and a son will have to find each other in a very dangerous universe.

sea ​​of ​​stars, a space opera with leviathans, wild tribes, sharks and talking monkeys in which a father and son who are at their worst as a family are separated and struggle to reunite. Jason Aaron and Dennis Hallum transport us to a wild space where wonders happen at every turn, but they are not always beautiful and dangers abound. A story of family, friendship, betrayal and religion in which the authors seek a show comparable to the works of Ghibli.

Gil’s wife and Kadyn’s mother has recently passed away. She, unable to leave her son alone, decides to take her with him on one of her journeys as a space carrier. What Gil didn’t expect is that they would be attacked by a legendary creature from the void and end up separated by the dark space. With almost no oxygen, the father has to survive as best he can to find Kadyn. While the boy discovers that he has strange powers and two new friends, a dolphin and a space monkey. But he is not safe, the savage inhabitants of the border space search for the god who abandoned them and believe that Kadyn could be it.

A story that encompasses the best of space opera, adventure, discovery and mysteries bigger than the characters. There are beasts and monsters, tribes of savages and battles, the genre is heir to the pulp, and Jason Aaron knows it, and he squeezes that fantastic character as far as he can to show a strange universe, full of nonsense that only works in this story, without stopping to think about science, only about fiction.

Aaron and Hallum create two dramatic lines in the story and handle them with different tones. The one about the father desperate to find his son in a wild and terrifying universe, and the one about the boy who discovers a wonderful world and powers that allow him to do what he could only dream of. One is intense and tense, the second is fantastic and lively, but hides many dangers behind it. Little by little they are weaving an adventure story that speaks of family, love and the sense of belonging, a search in which the father discovers and learns what he did not know about being a father and the son has to mature to distinguish between true friends and liars who want to take advantage of him.

A story that wouldn’t work without the art of Dennis Hallum. With a defined style but with quick and undefined strokes, it leaves a space that does not need to be cluttered with elements and in its minimalism it makes a terrifying background for Gil but a tapestry of surprises for Kadyn. With good character designs that are defined with few lines and his imagination for space beings, Hallum leaves a universe with two recognizable and attractive faces. Simple, direct page layouts that stretch the narrative across huge spaces and shrink them claustrophobically make the artist master the rhythm with ease. With a faded color at times and with a strong contrast with black, the spatial sense of the entire work is maintained.

We conclude that Sea of ​​Stars. star abyss, It is a work for all ages due to its dual character between the adult and the child and its simple and subtle subtexts. A space opera to enjoy the discovery of a huge universe full of wonders.

Description : From the writing duo JASON AARON (Redneck Bastards, Thor) and DENNIS HALLUM (Cloak & Dagger, Vader: Dark Visions) with stunning art by STEPHEN GREEN (Hellboy and the AIDP) and cosmic colors by RICO RENZI (Spider-Gwen) . A new science fiction series with the significance and heart of The NeverEnding Story and Miyazaki’s boundless imagination, a galactic adventure for readers of all ages.

Study affirms that the covid vaccine alters the menstrual cycle