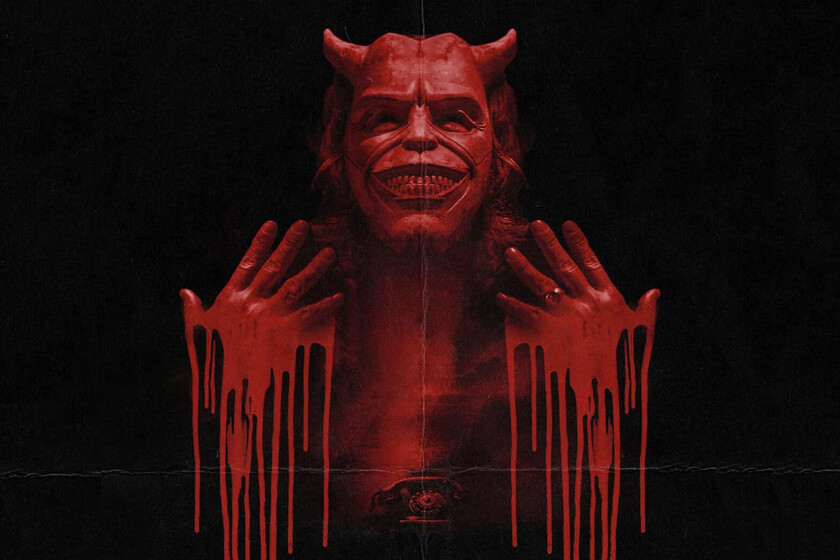 ‘Black Phone’ is the director’s new collaboration Scott Derrickson and co-writer C. Robert Cargill, with whom he previously worked on ‘Sinister’ and ‘Doctor Strange’, following his fright from Marvel and leaving ‘Doctor Strange in the Multiverse of Madness’. Now returns to the genre in which he excelled and tackles a terrifying subject. Based on a short story by Joe Hill, the film is about a Colorado neighborhood that has been paralyzed by a wave of kidnappings in the mid-1970s.

A boy named Finney (Mason Thames), whose good heart makes him a target for school bullies, and his younger, foul-mouthed sister (Madeleine McGraw), the struggling family in a depressing environment with an alcoholic father who whips them, must face a terrible reality. Children have been going missing in their town for quite some time and the locals call the mysterious perpetrator The Captor (Ethan Hawke), and everything gets complicated when Finney becomes a victim of this kidnapper.

Finney must find a way to overcome his fear and break out of his basement prison, but he has unexpected help on a black phone in the same room, and even though he’s offline he hears it ringing. A typical concept premise that becomes a perfect plot of limited elements, very much in the style of the latest Blumhouse hits but taken here to another level thanks to Derrickson’s directiona great 70’s setting and an expansion of the kidnapper theme with various associated macabre imagery.

Stephen King’s DNA in every image


‘Black Phone’ is at stake trying to include sordid real-life situations like kidnappings, child abuse and other horrific events, but it is very effective despite the inclusion of supernatural elements. The amount of violence against children is shocking, and it becomes a general theme, whether it is domestic situations, absolutely brutal fights between them or graphic scenes that with adults. It seems that Derrickson incorporates many of his own experiences, memories and notes that seek to portray the tragic aspect of the portrait.

This translates to a combination of different types of fear routes on screen without making one seem more important than another. Before Finney is kidnapped, ‘Black Phone’ builds a world set in 1978, which portrays a violent time where it has been assimilated that bullying is done face to face and problems are solved with fists. There appears the villain, a masked psychopath played by an amazing Hawke, capable of becoming a man as cowardly as he is terrifying and grim.

For the vast majority of the film, the actor wears a segmented devil mask designed by none other than the legendary Tom Savini, which in Hill’s original 2004 short story, The Grabber was a clown. Following the success of ‘IT’, Hill suggested updating that look and Derrickson came up with the idea of ​​creating a three-piece mask through which the eyes could be seen in various changes and combinations.

Derrickson, in the pantheon of the greats of current terror

An instant iconography to a murderer that seems inspired by John Wayne Gacy, but avoid imitating the clown outfit of the same. The black balloons are a borrowed item from the movie’possum‘ Y much imagery is full of influences from the work of Stephen King, both his odyssey in Derry and ‘The Shining’ and other works. The second great element is Finney himself, the most important character who transmits his learning naturally, although the MVP of the film is Madeleine McGraw, who plays the younger sister stealing each scene in which she appears, with spontaneity and great grace.

Hill tends to write about family and if in his graphic novel ‘Locke & Key’, he explores a magical world that reveals secrets within an ancestral home and in ‘NOS4A2’ he builds a vampire dream world for children from broken homes, here he reinforces his idea of ​​escape from a terrible reality through confrontation and the paranormal. Where the television adaptations of his two previous works were diluted, ‘Black Phone’ is capable of turning emotional catharsis at the right time. It is by far the best adaptation of his work, just above the underrated ‘In the tall grass’.

‘Black Phone’ is a great return to form from Derrickson, who handles the chilling idea of ​​heinous crimes next to your house just as wellin ways that completely erase movies like ‘Summer of ’84’, and the archetypal supernatural tale, updating the idea of ​​movies like ‘The Last Step’ (1999) and other new classics of American urban horror, where Matheson’s trail and the by King rise up with the unrivaled dexterity to portray the macabre from a director who already has enough landmark works in the genre to be considered one of the greats of contemporary horror.

‘Black Phone’ opens in theaters throughout Spain on June 24 by Universal.

10 horror movies based on real events that will shock you

Capgras syndrome, the delusion of impersonation