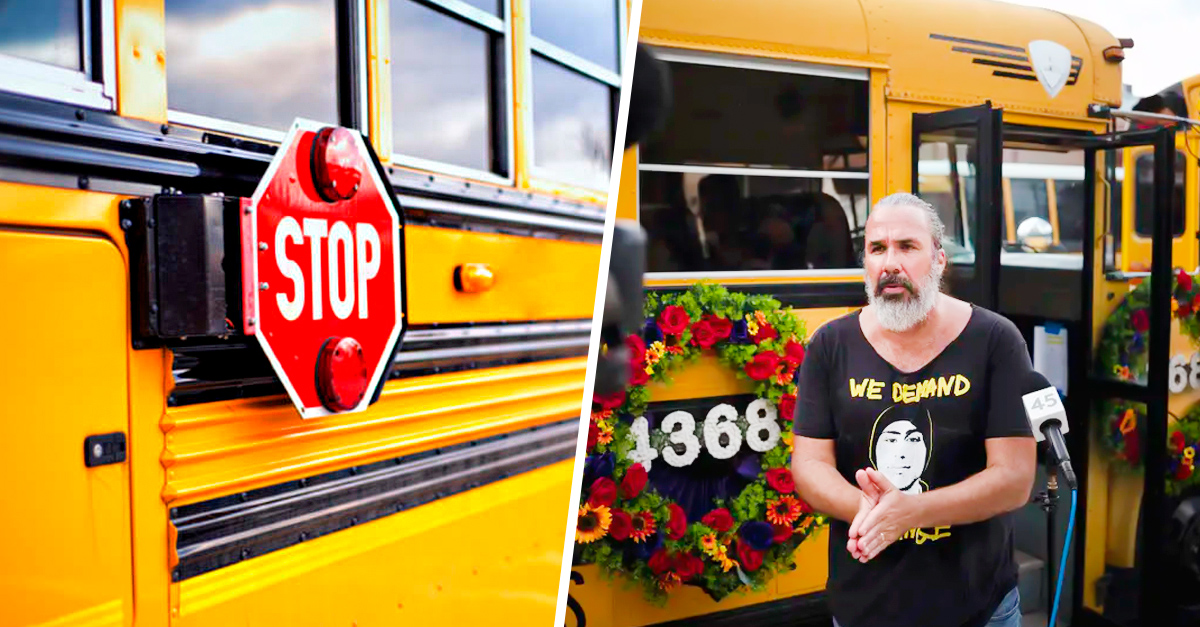 This July 14, the National Rifle Association (NRA) Children’s Museum, a flotilla of 52 yellow school buses with 4,368 empty seats to honor the number of children killed by gun violence this year in the United States, he made a 1.6-kilometer-long procession to Senator Ted Cruz’s home in Houston, Texas.

The museum said they chose Cruz’s home as the opening site for the procession because he is the top recipient of funds from gun lobbyists in Texas. According to BuzzFeed News, the first bus carried items from school shooting victims, including a LeBron James Miami Heat jersey, a favorite of Joaquin Oliver, who was killed in the 2018 Parkland school shooting.

The NRA Children’s Museum is the latest project by artist Manuel Oliver, Joaquin’s father. Since the death of his son, Oliver has expressed his defense of gun control through public art and activism.

On July 11, he interrupted President Joe Biden during a speech in the Rose Garden, asking the White House to create a government office dedicated to armed violence. Last year he orchestrated a mock graduation in which a former president of the National Rifle Association spoke to more than 3,000 empty seats, representing the teenage victims of America’s mass shootings.

Oliver’s goal now is to expose government officials who accept NRA donations to American society. In addition, he seeks to pressure officials like Cruz and Marco Rubio to deny funding for the association and enact laws for universal background checks.

We’re after the money. These leaders are not loyal to the Second Amendment. They are loyal to the industry and the arms manufacturers, who protect them. Supporting gun control is not patriotic. It’s corrupt and I wanted to find a graphic way to show you what the impact is.

Oliver will deliver a letter written by Joaquin, in which he expresses his thoughts on gun control in the country, five years before his death, at the house of Cruz, who received a total of 749 thousand dollars from the pro-weapons group. Oliver said that his wife Patricia found the letter a month after the murder of her son:

It was from a school project. He was a child when he wrote this letter. He impressed me a lot when I read it. We have been saving our little letter to remind us what we are fighting for. My son knew, at the age of 12, what to do, better than [Ted Cruz]. I want to [Cruz] read that with your own eyes.

The symbolic procession joins calls for gun control reform that have been gathering strength across the country following the deadly shooting at an elementary school in Uvalde, Texas, last May that left 19 children dead. and two dead teachers.

The waitress who served her bullied her at school

Principal was suspended for making roast meat in a school

Iran players refuse to sing their national anthem in protest

Elon Musk says Twitter is in breach of contract

The Nike jacket for our adventures inside or outside the city, is waterproof, packable and has a 50% discount

“It would be great to be in Westeros”

Spas to relax in CDMX