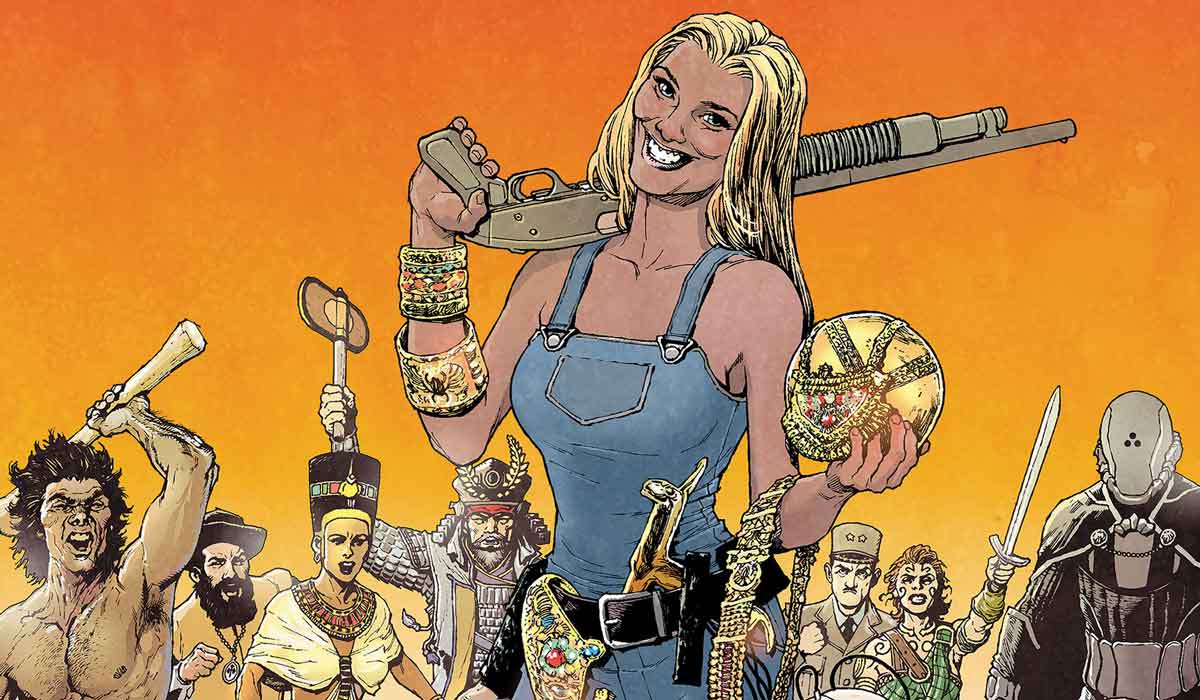 What would you do if you had access to a time machine and could move around the timeline as you please? To be a hero, a villain, a thief, an accurate historian… Panini Comics brings us Garth Ennis and Goran Sudzuka’s wacky take on a woman who risks to win, under the AWA Studios label, Marjorie Finnegan.

What is Marjorie Finnegan about? Travels in the time? Theft of jewelry and other valuable objects considered true historical treasures? Of police chases to stop the biggest temporary criminal who is known and answers for Marj? No, absolutely not. None of that is the truth of what is told here. It’s just the shell that surrounds the usual acid criticism of its screenwriter. but above all Marjorie Finnegan: Temporal Criminal It goes from a main premise that is born to a certain extent from the need to turn to comics as a means to disconnect from daily life, it goes from those parties with friends, from those romantic dates that end with a kiss and everything that comes next… going to have a good time.

Because Marjorie Finnegan and his talking head and time machine, Tim, have a list of escapades that Indiana Jones himself or the peerless Lara Croft would like to write down on his resume, but we have a major problem, if there is such a thing as a criminal through time, it is logical to think that there are also those who persecute such atrocities, a temporary police that is not going to allow everything to change for the benefit of a crazy person who dedicates himself to jumping to ancient Egypt to loot the recently deceased pharaohs or simply to Mount Calvary to preach about whether Jesus really was the Messiah, not to mention his appearances at the court of Henry VIII or alongside Donald Trump just for fun.

The list of her crimes is so long that they have put Harriet, the best agent of the Temporary Police Department, to get her captured and put her once and for all behind bars in a maximum security women’s prison. But when you have such a file, it is not to be expected that in a prison, and in the company of a velociraptor in arms, Marj spends a long time without putting her ass in the open air again because the occasion deserves it, she is going to save the world from the two most ruthless opponents, Stan and the Lord of Evil.

If by now you have not realized the size of this madness, the absolute irreverence that is shown by any belief and with a coarse language that is a trademark of the house, it is that you do not know much of the work of Garth Ennis, a gentleman Irishman who has already created jewels like Preacher or The Boys and who hardly needs an introduction. Theirs is the fault that we have Marjorie and Harriet engaged in a crazy adventure, which at times seems to lack even a plan, which only by impulse already heads towards that place where the works that have come to entertain end, the bottom of our I remember after reading it. Because it doesn’t matter if they survive or not, if they manage to prevail over the villains or kill each other and the common past they share, we already have a smile on our lips.

Those weapons were not in my panoply

Normally finding a Doctor named Twelve gives you relative confidence, what you don’t expect is a 12 gauge pump action shotgun that can give you more than just a headache and doesn’t prescribe cough drops. Together with Marjorie’s inseparable companion, we have Harriet’s machine gun, capable of literally sewing any target with bullets until it is like Gruyère cheese. Ennis has not skimped on having what is necessary so that his cartoonist can entertain herself.

And it does so by exposing viscera and blood everywhere in a world that often seems to be upside down, where each temporary era is more chaotic than the previous one. A challenge that Goran Sudzuka more than meets, perfectly capturing the two sides of the coin that are Marj and Harri, so different and at the same time so compatible. A set that leaves us with a series of eight USA issues that can be read in one go, very entertaining, subversive and with a humor of all colors that stands out precisely for being insulting as well as touching, because madness sometimes makes us embrace what we never would have imagined to appreciate.

Description : Marjorie Finnegan is a temporary criminal. What else do you need to know? The bad thing is that her burglary trail through time has caught the attention of the Time Police Department and, worse still, her ex and her partner intend to use their time technology to change history. for her own benefit. Marj’s only ally? A guy named Tim. And he is just a head. But… what good is a head?