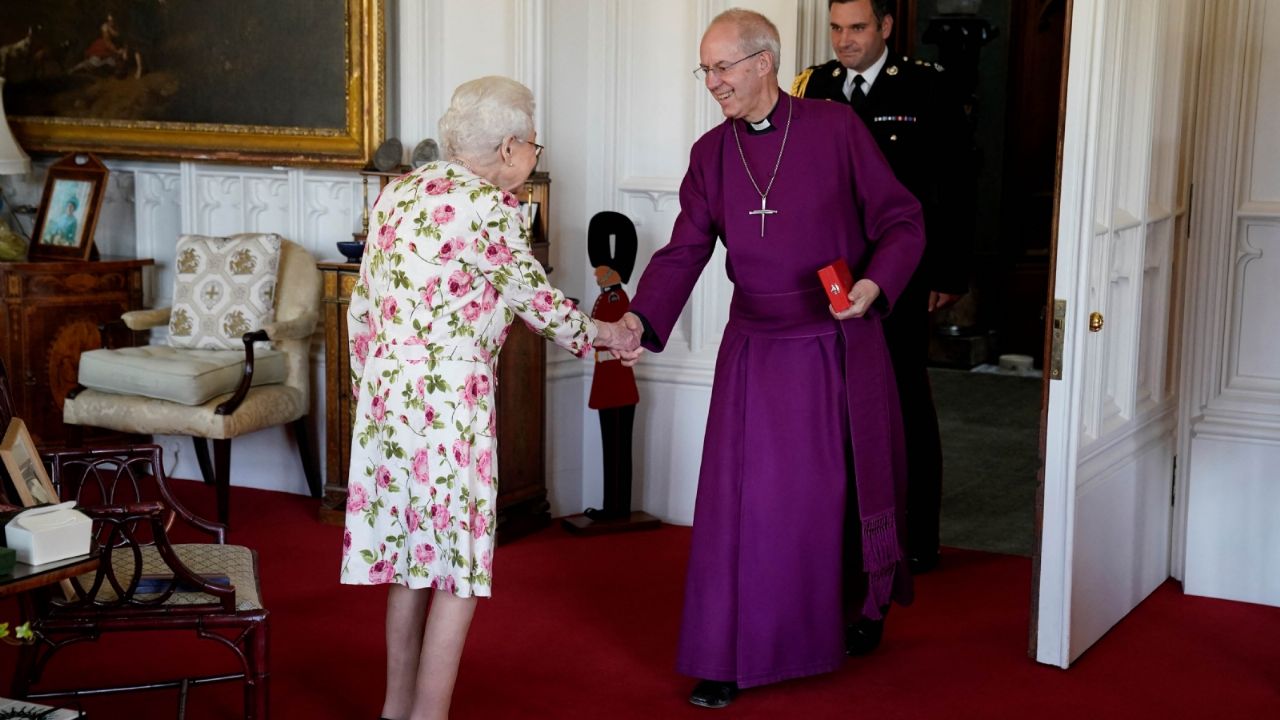 Queen Elizabeth II, 96, was photographed smiling and standing, without the aid of her cane, during the visit of the Archbishop of Canterbury, Justin Welby, at Windsor Castle to present her with the “Cross of Canterbury” as “a symbol sincere” of the “love, loyalty and affection” of the church, in the framework of his 70 years on the throne.

The Archbishop of Canterbury was due to hold the Service of Thanksgiving at St Paul’s Cathedral as part of the Platinum Jubilee weekend but was forced to miss the ceremony due to contracting Covid-19.

Today, he finally got a chance to congratulate the monarch at Windsor Castle, where he praised her “tireless” service to the Church of England.

At the audience, Reverend Welby presented the queen with the small silver cross, inspired by a 9th-century Saxon brooch and incorporating a triquetra pattern, as a “heartfelt symbol” of the queen’s “love, loyalty and affection.” church.

The monarch, wearing her glasses and dressed in a cream-colored dress decorated with a pattern of large pink flowers, was photographed standing as she was shown the cross.

The queen shook hands with the archbishop, who was dressed in purple clerical robes, as he entered the Oak Room at Berkshire Castle.

Presented in a bright red box and attached to a blue ribbon, the cross was specially designed for its royal recipient with platinum inserts in recognition of his milestone 70 years on the throne.

Elizabeth II, of deep Christian faith, is Supreme Governor of the Church of England and Defender of the Faith. The monarch was also presented with a framed calligraphy that read:

“Throughout her reign, Her Majesty has duly defended both the Christian religion and the Church of England in her roles as Defender of the Faith and Supreme Governor of the Church of England. Whether in the formality of the opening sessions of the General Synod or in the more intimate context of his personal addresses to the nation and the Commonwealth at Christmas, His Majesty has revealed his deep faith and its relevance to all he undertakes His subtle understanding of the changing position of the official Church in England he has sustained and encouraged laity and clergy alike.His concern for the unity of his people and the welfare of the less fortunate has been a constant inspiration to the whole Church.Yours are an example of a Christian life well led. This presentation of the Canterbury Cross is a sincere symbol of the love, loyalty and affection in which the Church of England holds Her Majesty and represents recognition and gratitude. her attitude of the entire Church for her seventy years of tireless service. God save the Queen!”.

Queen Elizabeth II had a busy start to the month as the UK celebrated her jubilee during a four-day weekend of festivities.

These included a special Trooping the Color with hundreds of soldiers marching from Horse Guard Parade to Buckingham Palace, a special flyby of Red Arrows and other military aircraft, as well as a special concert honoring Her Majesty.

A Service of Thanksgiving was also held at St. Paul’s Cathedral in London, where members of the royal family gathered to express their gratitude for the 70-year reign.

However, the monarch did not attend after experiencing “some discomfort” during the festivities of the previous days. She also missed the Epsom Derby the following day, before appearing at the Platinum Jubilee Pageant on the final day of celebrations.

the 21 best looks of the queen of boho-chic style

Is The Flash developing a spin-off series after its eighth season?