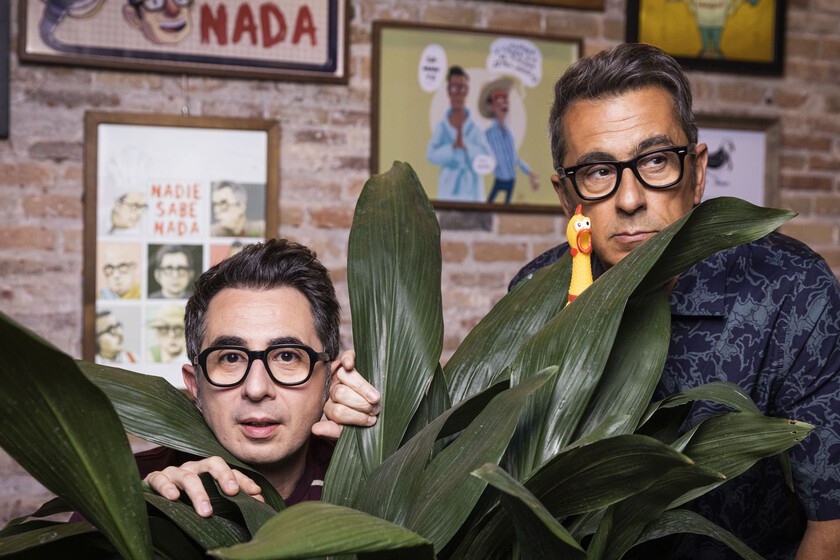 Berto Romero and Andreu Buenafuente are national treasures. Since they met for the first time in 2007, in ‘Buenafuente’, the friendship between the two has been one of the most prolific and interesting of Spanish comedy. Together they have toured theater, movies (the unfairly underrated ‘El pregón’), television and, of course, radio. There is no one interested in Iberian humor who does not know ‘No one knows anything’and there is a reason for this: they are the best.

samanté drops on your face

After almost ten years on the radio and uploading programs to YouTube, ‘Nobody knows anything’ has had the biggest of its changes this 2022: The program would continue to be broadcast on Cadena SER at the usual time and then it would be posted on the Internet, but the video, a fundamental piece of today’s podcasts (this is another melon for another time), would go on to HBO Max. And with this change came doubts: Would it change the essence of the program? Would they have to bow to streaming requests? Would they be forced to do spectacular stunts to hook a larger audience?

The first program, although it came with a sketch incorporated at the beginning, wanted to leave us alone: ​​this was still the usual ‘Nobody’ (with its buts, as we will see later). Crazy improvisation, stupid answers, uncontrolled humor, sudden reflections and some other hooliganism. For those who listen to the program without seeing it, there has not been much change, beyond some small explanation that they can give in some concepts for new viewers. ‘No one knows anything’ remains absolutely intact in the background, to everyone’s relief. In form, not so much.

The move to HBO Max makes Andreu and Berto, television animals, look better than ever: the show’s team has grown, the cameras and direction are much better than the SER… ‘No one knows anything’ has gained in visual dynamism and image quality, including going outside, which look spectacular when before they seemed recorded on a home video. A priori, the synergy between the program and the streaming service It has been beneficial to both. Or not?

Not at all. The essence of the program remains exactly the same: two friends, questions, scammers, sections, characters and pure and simple improvisation… But it is, so to speak, as if ‘Modern Life’ had done a season on Netflix from a theater and with Ignatius sitting in his chair not doing anything weird. Andreu and Berto seem a bit constrained: the set is nice, the cameras are perfect, the music is on at the right time, they have a vertical screen to show their videos. It is a perfect program. But ‘No one knows anything’ is not perfect.

It seems as if, being on HBO Max, Andreu and Berto force themselves to be funny all the time, with some pieces clearly prepared in advance (like both going out to call the intercom in a doorway) and in which the pallets are missed, the microphones malfunctioning, the music coming in late, without makeup, with the clothes they would wear on the street and the feeling, sometimes , who have gone to spend the afternoon without owing anything to anyone. That light, half-baked program feel, has been lost in the new format: over time it may work fine, but at first it’s weird to chew on. It tastes the same, but it clearly has other ingredients.

A change in the sound section of the program does not help in which the sound managers, very quickly and professionally, are in charge of inserting supposed humorous notes that draw attention away from what is being told at the table: it is a format that are still acclimatizing and whose novelties, beyond the aesthetic, they do not finish convincing. Now, aren’t they convincing because really ‘Nobody’ is more affected by a crappy format or aren’t they because, in general, fans are very reluctant to accept changes in the things we like?

Do you think they can fight?

Most of the public you have not understood the transition to a payment platform. Yes, it will result in a salary increase for the team, it is a way of opening up to a new type of audience and, furthermore, it does not lose the free essence of any podcast service, but, at the same time, authenticity is lost and many feel betrayed after many years of fidelity. Some think it’s all about moneyand others are calmer believing that after the summer, when the new season begins, everything will return to normal (although that may depend more on streaming ratings than reality).

Programs have been cut in half on YouTube, and the audience has been falling: the complete episodes were around 250,000 views and the new ones, which try to encourage viewing on HBO Max, have remained at just 120,000. It’s the same thing that happened in ‘La Resistencia’, bridging the gap: when they decided that the program had to be seen on Movistar Plus+, the viral phenomenon went down but, I suppose, the viewings on the platform grew. It is a very difficult balance to achieve, that of maintaining a fan base that enjoys the free program with that of a few faithful that attend the pay channel in each broadcast.

It is still early to know if these summer specials on HBO Max will stay that way or there will be something else later, but their fan base (at least those that can be read on social media) has fallen apart asking for the return of the ‘No one knows anything’ of always. A program that has been there during the pandemic, giving humor every week for almost a decade. They may have slipped a bit, but they have to be given the benefit of the doubt. And, if we are such fans, let them try to evolve instead of anchoring in what his audience wants, which, as always, is closed to anything new. At the moment, beyond the analysis, it is still a worthy program, a beacon of comedy in Spain. And so it will continue.