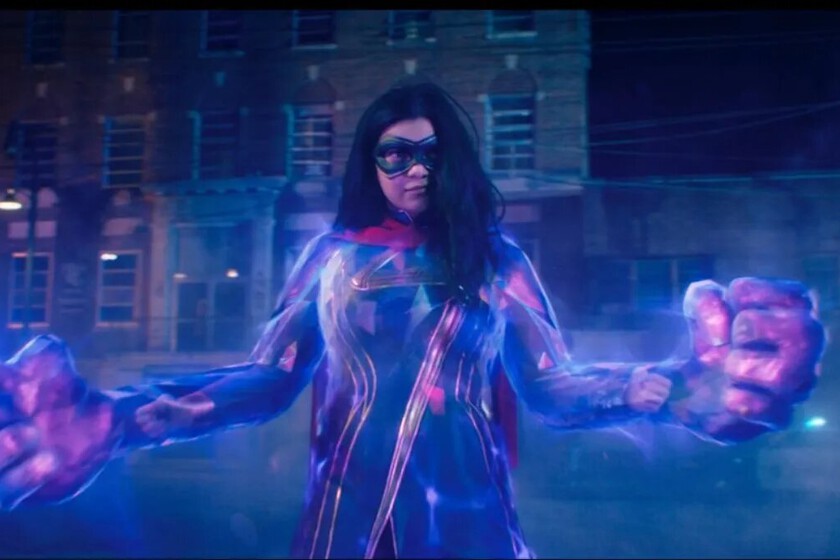 What happened in ‘Ms Marvel’? What are the decisions made in offices that have led to the series, split into two poorly interconnected stories, being Marvel’s most irregular to date? After losing all hope return to the unapologetic teen fun of the first few episodesthe last episode takes up the plots that were forgotten before the trip to Karachi and shows us what ‘Ms Marvel’ could have been and is not.

Attention: in this review there will be spoilers for the last episode. Big spoilers as well. You are warned.

The first chapters of ‘Ms Marvel’ could like more or less: there are those who say that it looked like a Disney Channel series (which indicates that they have never seen a Disney Channel series in their lives), there are those who complained about the irrelevance of the character… I personally appreciated another different tone in a Marvel that tends to take as little risk as possible and leave it on autopilot.

That autopilot took over in the central episodes: Instead of focusing on the really interesting plot (a teenage girl discovering her powers and how to be a hero), the series went down a more serious and boring path, giving her time to introduce a time loop, a history lesson, a group of superheroes (with which absolutely nothing has been done) and forget about Bruno, Circle Q and the institute. A serious, serious mistake.

And it is that when ‘Ms Marvel’ has returned to New Jersey, it has shone again with its own light. Perhaps not like in that first chapter full of promises, but enough to leave a bittersweet taste in the mouth, from a very poorly exploited premise. Bruno, Kamala’s family, and the Circle Q are all vital parts of the character’s iconography, but if they’re left out during the episodes, how do they expect us to ultimately feel anything about what’s going on? The error is not the last episode, which is well balanced and in which the action scenes are (finally) spectacular, but what has brought us here.

conversations on the roof

Anyone who already knows and loves Kamala knows that the character it has been a mere blurry sketch for half of the series, in which she has prioritized the search for her origins over the discovery of her powers, the love for her close family and her role as protector of the city. If she had focused on this, perhaps with the appearance of Thomas Edison as a villain, could have been among the favorites of the public instead of being a resounding general disappointment.

The disaster was not the fault at all (and I think we all agree here) of Iman Vellani, the perfect Kamala Khan and one of Marvel’s greatest casting successes until now. In the sixth episode it is noted that finally he is completely done with the role, putting on the suit gives him his own energy and from now on we can only hope the best for her: yes, with a script to match, please. A scene as simple as her conversation with her father on the roof does more for Ms Marvel than twenty pointless chases across Pakistan.

There has had to be, by force, tensions between Bisha K. Ali, the writer in charge of scripting the pilot, and Marvel: it’s as if the series rejected lightness and was forced to deal with more serious topics, in the series that least needed it from the production company that least cares about seriousness. It’s a shame they haven’t let it grow organically so that this episode (and Kamala’s, finally, giant deformities) was a celebration and not an exception.

But we all know that Marvel is not only what we are seeing, but the preparation of what we are going to see. For this reason, the revelation of Kamala as the first mutant in the Marvel Universe (with the ‘X-Men’ guitar blast that already sounded in ‘Doctor Strange and the Multiverse of Madness’) is quite an event, in addition to the confirmation that beyond Black Lightning’s cameo among the Illuminati, the Inhumans are neither there nor expected.

Will we have Kamala as part of Charles Xavier’s group? Will he break into the Young Avengers? Will he do tandem with Captain Marvel? Part of the fun of Marvel is fan speculation. Sometimes, as is the case, even more than the project itself. Everything seems to indicate that ‘Ms Marvel’ will return in a second season where they will probably listen to the fans to give us the series that could have been.

‘Ms Marvel’ has been unsuccessful, yes, but in its last episode has given a taste of what could have become no ClanDestinos and no trip to Karachi: the light, funny, spectacular and unapologetic adventure of the protective teenage superheroine of New Jersey. Marvel Can Still Reverse Bad Reviews and turn it into an emblem. Next stop, ‘The Marvels’.

colors, nail art and even the technique of the moment (dry manicure)

TVE chooses the new presenter who will head the Newscast