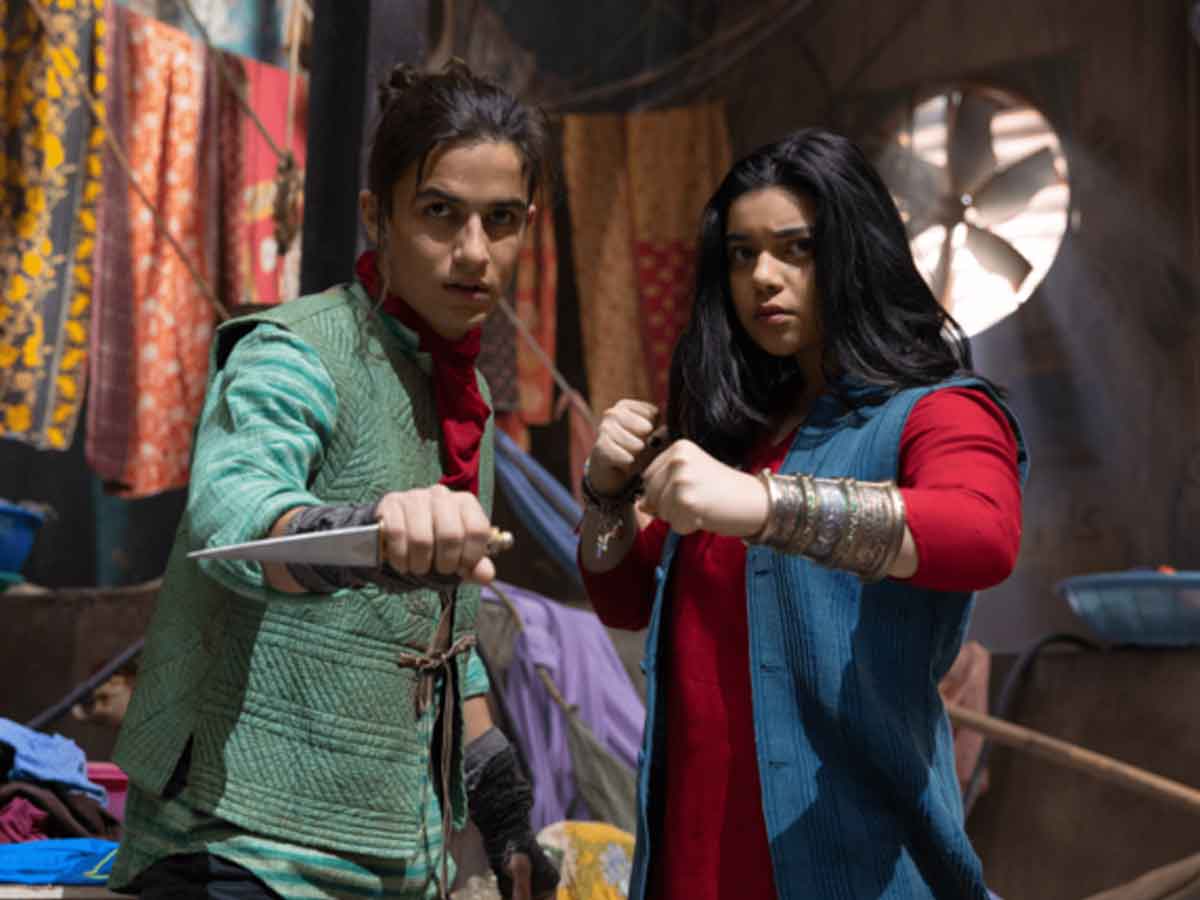 Exhaustive review of the fourth episode of Ms Marvel, the series that adds a new superheroine to the UCM and that can be enjoyed on Disney Plus.

With the fourth episode of mrs marvel We travel to Pakistan to continue unraveling the mysteries surrounding the origins of the powers of kamala khan and its past reminding us how important grandmothers and our roots are in our lives.

Did you freak out with that ending? What mysteries unravels the true origin of Ms Marvel?

Kamala and her mother travel to Pakistan after the vision that our superheroine had in the previous episode and everything to continue unraveling the mysteries that hide her newly discovered powers and that seem to connect her with her past.

There is nothing better to learn about the past than our elders.

And Kamala’s grandmother becomes a fundamental piece to know all the moves that the young woman is facing.

If something has tried to highlight the series at all times, it is the Pakistani origins of the protagonist and it has been a hoot to see Thailand converted into Pakistan.

Above all, seeing how they relate culturally speaking, how crowded the streets are, the food, the customs they keep… It is a real joy to discover a new culture through the prism of Marvel Studios Y kamala khan.

Because the series reminds us again that the important thing here is not the interdimensional invasions or the fate of the world but something simpler like discovering where it really comes from. kamala khan. The rest is simply an appendix to make the story more exciting.

In the fourth episode we have had reflective moments where we have been able to see Kamala talking to her grandmother who seems to know more about her past than we initially thought, while Kamala’s mother tries to reconnect with her daughter and her roots.

The family part of Kamala is really important because they are showing us that despite its cosmic origins, it is still a very human story with a lot of soul.

Of course Kamala on her trip to Karachi will find surprising allies along the way like that secret organization of The Red Daggers that seems to have been clashing against The Clandestines for years and gives us the occasional action sequence that makes it clear that the series has all the ingredients measured to perfection.

But it also sheds some light on the Noor Dimension and the terrible consequences that will cause Los Clandestinos to return to their world without caring about collateral damage.

Maybe one of the only complaints I have from the episode is how The Clandestines they have gone from prison with a rather convenient plot twist, let alone the journey they take from the United States to Pakistan.

Everything is to see how Kamala Khan unfolds with her powers, who little by little seems to be getting the hang of it more and more.

It is noted that Kamala has evolved in the use of her powers since the first episode and it is always good to keep this in mind because they have always made it clear to us that Kamala is like us and I cannot imagine the practice we should do to control a power like the one wielded by the lass.

How evil is Kamran’s mother leaving her son abandoned… But she will have her reasons. Because she paints that she’s throwing him right into Kamala’s arms.

On the other hand we have that cliffhanger at the end where they show us how Kamala has traveled to the past. At the time of the Partition. Where it is likely that she will meet her great-grandmother and we will know the true origin of Kamala Khan and her powers without intermediaries through her.

The fourth episode of mrs marvel Once all the pieces are arranged on the board, it is used to move them in an exciting game from which we do not know what to expect.

Like all Marvel Studios series, everything cooks over a very slow heat, but you can tell that they are adding all the ingredients in the right measure so as not to feel too spicy.

Kamala’s plush is a classic and has already appeared in the comics.

In fact, in the comics, Kamala also traveled to Karachi for a season where she met her grandmother again and learned the story of her great-grandmother precisely traced to the one we have seen in the series. Aisha got lost during the Partition but a path of stars

In fact, in the comics, Kamala also traveled to Karachi for a while and learned first-hand the origin story of her great-grandmother, and precisely the story that her grandmother tells her is traced to the comic. The grandmother was lost during the Partition and a trail of stars helped her to reunite with her father. Although in the series it is intuited that it was Kamala herself who allowed her grandmother not to get lost. But we’ll see in the next episode.

Kamala on her trip to Karachi also met Red Dagger, a young Pakistani man without super powers who had decided to help his people by putting on a balaclava and with only his parkour skills to make a difference.

In fact, in the episode we find a QR code that takes us precisely to the comic where Kamala traveled to Karachi and met Red Dagger. All a detail!

Some licenses have been taken in the series, such as creating that secret cult of Red Daggers, but it has served to help us learn a little more about the Noor Dimension and the plans of Los Clandestinos.

Where do the weapons that Los Clandestinos later carry come from? Why does Najma abandon her son?

I love that we are discovering a piece of history as important as it was the partition in a Marvel Studios series and how that past history is connected with the present of Kamala Khan since, after all, the most important thing about the series is its true roots.

Waleed makes it clear to us that Kamala’s hybrid genetics is what allows her to shape Noor’s light. The human side of her binds her to the matter of the mortal world. What makes it exceptional.

The Underground in Karachi arrive in no time or we guess there is an ellipsis of days that Kamala will have been training along with Waleed and Red Dagger.

The chase through the streets of Karachi has been great and how Ms Marvel and Red Dagger have managed to overcome all the obstacles.

A pity Waleed’s death… But what about the rest of the Clandestinos? Something tells me they are not immortal despite their longevity.

And we have that cliffhanger at the end where it seems that Kamala Khan has definitely traveled back in time to the time of The Partition and more specifically to the moment her grandmother described where she was about to get lost but a star trail helped her find her father … Are we talking about Kamala being the one who helped her grandmother find her father? Exact!

When we talk about Kamala Khan’s powers, many times we forget to comment on a detail to take into account about them, and that is that her powers are connected to those of time travel since the matter that Kamala uses to enlarge and shrink it comes precisely from his other selves in the Multiverse.

How has your body been with this revelation?

Without a doubt, this makes the end of the episode not feel out of place at all since it is likely that Kamala’s powers are still forming and therefore she has yet to discover the path that will lead her to become Ms Marvel.

At the moment the series has me completely hooked and although with its licenses and having already lost that freshness with which the series began, it continues to show a new world that is exciting.

Without a doubt, Najma’s plan to get hold of the bracelets seems to be covering all fronts since the way in which he leaves Kamra invites us to think that the young man will do something stupid in order to win his mother’s favor again.

With Kamala traveling back in time, presumably apart from helping her grandmother find her father at the station during The Partition, she will also meet Aisha who will likely give her answers to all the questions she has been wondering about since she ran into the bangles.

We also have the conversation between Kamala and Nakia pending.

In any case, what has me with the fly behind my ear is the theme of that noor dimension and the bracelets that could well be some nega bands, a very characteristic element of the Kree warriors and that Captain Marvel used in the comics.

I still think that we will see something of the Inhumans in the series and that Kamala’s powers will honor her counterpart in the vignettes… You just have to see that in this episode for the first time we have seen how the crystals of the bracelet were broken causing that tear space-time that have made Kamala travel to the past.

The design presented by the Noor Dimension invites us to think that perhaps this dimension is reserved for those worthy of the light of those blue-colored beings who visited us eons ago.

In fact, we are already beginning to know the first details of what we will be able to see in The Marvels and the Universal Inhumans are beginning to sound… And it is that in the comics the Inhumans were presented as experiments of the Kree on Earth. But last minute. We discovered that the Kree had experimented on other races. Multiplying the presence of the Inhumans beyond the stars.

In any case, we continue with our feet on the ground and we’ll see what they surprise us with in the next episode of Ms Marvel.

What do you think of the fourth episode of Ms Marvel? What theories do you have regarding the origins of Kamala’s powers? Are the Djin really Inhuman?

Everything will be resolved when the last two episodes of mrs marvel in Disney Plus.

Olivia Wilde talks about her harsh divorce from Jason Sudeikis and her love for Harry Styles, in an exclusive interview