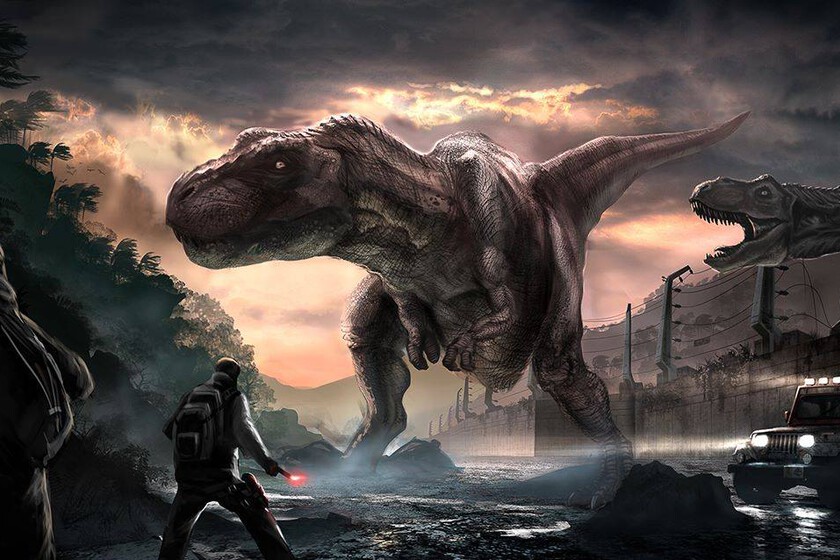 There were not a few of us who left watching ‘Jurassic Park III’ with a bittersweet feeling: the film was not good by any means, but… The pteranodons were headed for land! The next part was going to be something really wild! Well, not exactly: what followed was fourteen years without Isla Nublar, without a continuation of that ending and without dinosaurs anywhere. But it’s not that Steven Spielberg hadn’t tried: he had been promising for years that ‘Jurassic Park IV’ was going to be incredible. But, what do we know about that failed project? Come with us on an absolutely lunatic journey.

A dinosaur in New York

For years, everyone tried to give as much hype as possible to the future fourth part. So much so that it got out of hand. “It will take the saga to another level”said Joe Johnston. “Let the T-Rex hit the Walmarts!” Sam Neill asked. “It’s the best story since the first movie”Spielberg himself dropped. But behind the interviews and the hype… the chaos.

Little is known about that supposed story that Spielberg was handling, except that it did not follow the pteranodons at the end of the third installment. The director himself stated “We have an incredible story. In fact, I wish it had been the third instead of the fourth. It’s late, but this is the best story i have ever heard for a dinosaur movie from Michael Crichton’s book. And I’m not going to tell you anything about her. My lips are sealed.” In Hollywood parlance, this means “Not a line has been written yet.” Finally, William Monahan (‘The Departed’) wrote the first draftwhich left Sam Neill himself fascinated:

Steven blew me away with the story. Something alarming is happening with these dinosaurs that does not bode well for humans. Scientists never learn… You know that feeling when you saw the original movie and you were so freaked out, and you were mesmerized by the majesty of it all? I think this premise has the potential to cause the same response. Of all the concepts that have been created for these films, this is possibly my favorite.

Kathleen Kennedy, for her part, anticipated that it would happen in a different place, out of the jungle, in a twist that would make the saga feel fresh again. Movieweb, in 2003, had access to a rumor about what was then called ‘Jurassic Park 4: Dark Horizons’, which took place 13 years after the first part, when dinosaurs had more or less become an urban legend. But then they show up in Costa Rica, where they cause chaos. In the end, they all end up sick with a virus that kills them, which led us to think that this would be the final part.

Sadly, no one confirmed if this was the real concept behind the script and to this day we still do not know him. What we do know is what came after. And we got rid of a good one.

In 2004, John Sayles entered the equation, who already knew something about writing about killer bugs after his success in ‘Piranha’. The script completely changed, and now only Richard Attenborough would return to the main roster. The best? You can read the entire script at an early stage of development because someone hacked steven spielberg’s email and posted it on the internet.

The story is crazy: Nick Harris, an ex-Marine out of work, receives a commission from John Hammondwhich now has a gigantic aviary while trying to put up with Jurassic Park being controlled by a Swiss company called Grendel Corporation, which, while claiming to have wiped out all the dinosaurs, has actually left a few on the loose who infiltrate nearby cities causing chaos.

So Hammond proposes something to get his dinosaurs back: create a new kind of human, a tremendously aggressive individual but castrated so that it cannot reproduce. Phew. Are you still there? Well, it turns out that the plans for the project are still on Isla Nublar, inside the bottle of Barbasol shaving cream that Dennis Nedry, the mole from the first part, leaves in the mud. Nick signs up to go… And this is just the beginning.

Our soldier of fortune goes to Isla Nublar and using his infiltration techniques manages to sneak in and break some dinosaurs, until a kronosaur attacks him and he is captured. Did you think it was being a weird acid trip? wait, what the best remains.

Nick wakes up in the Swiss Alps, where he discovers that Baron Von Drax (once again: this is real) has created a new species of dinosaur, a mix of deinonychus, dog… and human. Nick is amazed to see that he can control the Saurians, something that comes in handy for Von Drax and his crew, who want to use them as war machines.

In fact, it’s time to put them to the test: Nick must use these dinosaurs to rescue a ten-year-old girl captured by terrorists in Tangier. Did I mention that dinosaurs wear bulletproof armor? Well now you know. The mission goes well and Nick begins to become an expert on the subject, killing a drug lord in his hot tub with clean teeth. In the end, the dinosaurs themselves turn against their masters And, oh, that’s how the movie ends.

What did I just read?

I confirm that everything you read is real and it’s in Sayles’ script from which, by the way, ‘Jurassic world’ takes some ideas. But things are about to get even crazier. This is Raptorman’s leaked image, which was in a later version of the script. The script would advance, yes, but its quality is another story.

To no one’s surprise, Steven Spielberg did not approve of this nonsense and the release date, which had been set for the winter of 2005, was pushed back and forth until it became clear that the project was not going to go ahead. throughout the years unsuccessful attempts have been made: The Internet was not willing to forget Raptorman.

Finally, after many -very many- scripts, one was reached with which everyone agreed. And the rest is history. When you are watching ‘Jurassic World: Dominion’ think that, as bad as it is, at least it doesn’t have dinosaur men trained for war by a baron who lives in a Swiss castle. It’s something.

Are birds dinosaurs? | Solve all your doubts

which color were the dinosaurs?

Vests, jackets and coats from the La Redoute sales allow us to renew our wardrobe for very little

With dinosaurs and skulls, these are the most exotic Christmas decorations of celebrities

All Movistar Plus+ premieres in January 2023: ‘Supernormal’ returns, the dinosaurs of ‘Jurassic World’ and more

What to do in Valladolid, Castilla y León, if it rains

Jack Sparrow made a special appearance for a good cause

three original plans to enjoy without getting wet