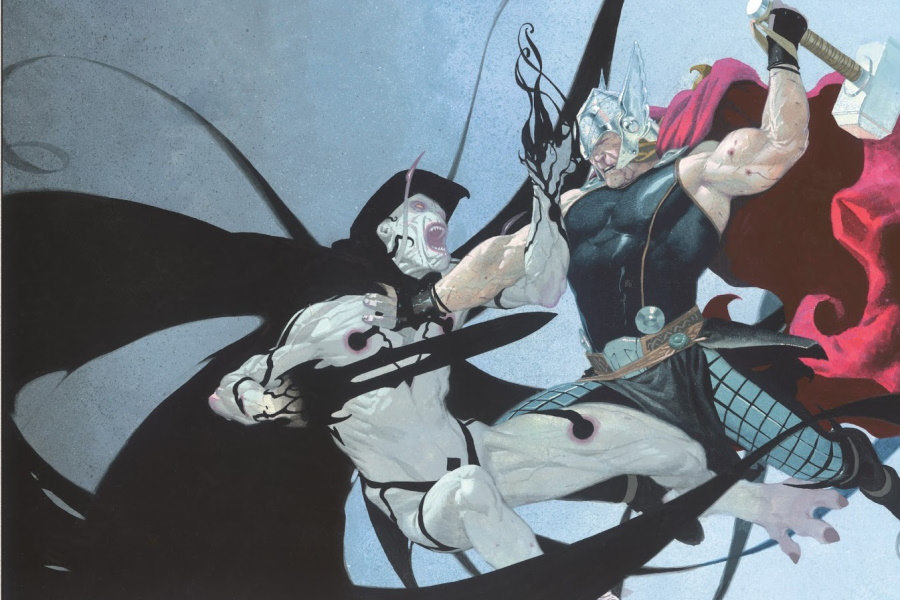 Let us remember an important moment in the history of Thor, when Gorr, the butcher of Gods, was introduced to the readers.

A decade ago, writer Jason Aaron began his now-legendary run on Thor: God of Thunder with artist Esad Ribić. It became an oxygen balm for Odinson as it established three distinct points in the God of Thunder’s immortal life: a young Thor in 893 AD, the current Thor, and King Thor at the end of time. The common thread between these three incarnations of Thor was the being that would become one of his most vicious enemies: Gorr: The Butcher of Gods.

Do not miss: Thor: Love and Thunder: Who is Gorr The God Butcher, who will be played by Christian Bale?

Long ago, Gorr was simply an ordinary member of his race who did not believe in the existence of gods. This is why he was so angry to discover that the gods were not only real, but often refused to help those who worshiped them.

Through a stolen sword imbued with vast and eternal power, Gorr gained the power to carry out a vendetta against all gods throughout the universe.

The series’ first story arc in Thor: God of Thunder (2012) #1-5 marked the beginning of Thor’s long-running rivalry with Gorr. To catch up with one of Thor’s greatest adversaries, take a look back at the biggest moments from that early story.

The gods are dead

Although Gorr does not physically appear in Thor: God of Thunder (2012) #1, his handiwork is evident both in the past and present. While the young Thor first encountered a Gorr victim, the current Thor answered the prayer of an alien child on the planet Indigarr.

After bringing rain to the planet, Thor set out to find out what happened to the Gods of Indigarr. To Thor’s horror, the gods were long dead, courtesy of Gorr. And, in one particularly gruesome scene, these giant immortals were hung on meat hooks.

The Butcher of Gods is not a misnomer for Gorr. In any case, that name doesn’t fully capture the horror of his actions.

What are you the God of?

As seen in Thor: God of Thunder #2, the first battle between Thor and Gorr in the past was completely one-sided… in favor of Gorr. In the year 873 AD. C., Thor was not yet worthy of Mjolnir, so he could not fly and was not as powerful as his modern counterpart.

In contrast, Gorr was relentless with his assault to the point where Thor seemed deadly by comparison. Gorr’s sword pierced Thor’s flesh, and Gorr nearly ended the young god’s life then and there. However, Gorr made the crucial mistake of goading Thor into questioning his divinity.

“What was Thor the god of before he died?” Gorr asked. “Thunder” was Thor’s reply, and he was punctuated by a bolt of lightning that managed to save Thor’s life at that moment.

Come kill Thor, if you dare

The current sequence of issue 3 was essentially a police procedural for the gods. Thor realized that Gorr had survived meeting him in the past and began searching for his old enemy. What he discovered was a long and bloody trail across the cosmos.

Thor correctly surmised that several missing gods and pantheons had already fallen prey to Gorr. This needless slaughter angered the Son of Odin so much that he summoned the Butcher God and challenged him to another battle. It is an epic moment that presaged the conflict to come.

the palace of infinity

The weather gods made their first appearance in Thor: God of Thunder #4, but only after Gorr and his Black Berserkers killed them.

At Chronux, the Palace of Infinity, Gorr desecrated the Pool of Eternity with the blood of the Time Gods as he prepared to travel back in time to the beginning of creation itself.

Essentially, it was a shortcut for Gorr to kill the gods before they were born. It was a crazy plan, but if it succeeded, Gorr noted that the gods of all the worlds would have one thing in common: “They will all be dead.”

Thor and King Thor together!

The opening phase of the story came to an end in Thor: God of Thunder #5, when Thor followed Gorr to Chronux in hopes of stopping his bloody rampage. Thor was not as successful as he had hoped and was forced to watch as Gorr descended into the Pool of Eternity a second time.

When Odinson pursued Gorr, he found himself in the distant future fighting alongside his future self: King Thor. Naturally, Thor’s first guess was that King Thor was his father, Odin.

Regardless, both incarnations of Thor proved to be formidable. Unfortunately for young Odinson, King Thor had some very bad news about Gorr’s actions and the state of the universe.

From there, the action continued in Thor: God of Thunder #6-11, which explored Gorr’s origin and his final confrontation with the Odinsons.

It may interest you: Exclusive: “No one wants to see Gorr’s butt”: Christian Bale

“You are going to make me tremble.” Michael J. Fox receives an honorary Oscar at an event held months before the big Hollywood awards gala