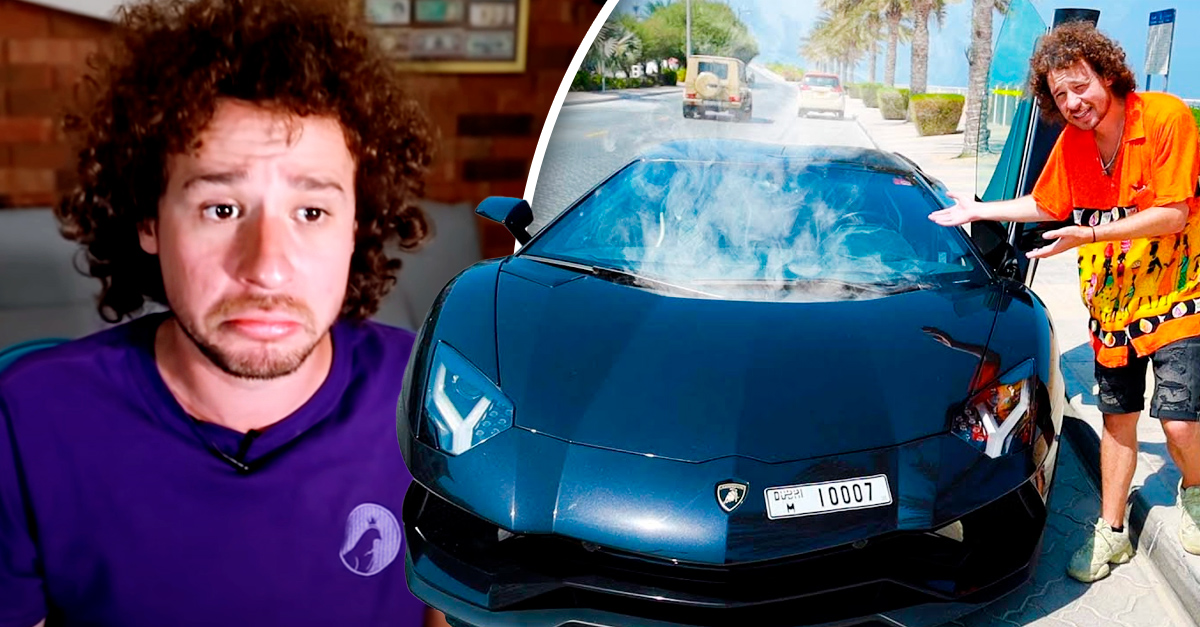 Luisito Comunica was one of the influencers who was present at the World Cup in Qatar 2022. During his trip, the content creator shared his adventures, the exotic dishes he tasted and even rented a Lamborghini to tour the streets like a millionaire.

What few knew is that the car was damaged and Luisito had to pay a little more than 20 thousand dollars. The news was confirmed by him through a video on YouTube, where he claimed to feel cheated and assaulted by the car agency.

Luisito said he paid $7,000 to use the vehicle and even had his passport withheld as a down payment. The agency staff told him that the car was insured and in case of any mishap he just had to call the police.

They told me that (the car) was fully insured and they told me that in any crash situation, any accident, just call the police. “They go, they make a report and you give it to us so that we can do the paperwork with the insurer.”

I’m going in the Lamborghini, I don’t see a stop and ‘play it’, and I’m like this: ‘No kidding’, the blow did sound hard, I’m going to confess it to you. I got out of the car, he inspected it and well, really, I see that everything is fine, it really doesn’t have a single scratch, it’s perfect and there was no event for which I had to call the police.

Upon delivery of the vehicle, the staff noticed some scratches on the lower part of the body. As expected, they asked him to answer for the damages and pay $10,000.

He tells me: ‘Did you get the police report? Why didn’t you take it out? Well, you’re going to have to pay to fix this car. I said ‘how much do you want?’

This is when the story starts to get suspicious, weird, and it all had to be through a web platform, all in Arabic. My bank wouldn’t let me. I was able to pay a thousand dollars, a thousand dollars and a thousand more, but after that my cards were blocked. This is when the situation starts to get worrying because the “brother” from the agency thinks I have no money, he mentions to me: “This is going to go to court, you won’t be able to leave the country,” and I’m like that ‘I fly tomorrow’.

In the end, the owner of the place intervened and gave him the possibility to pay as soon as his bank fixed his situation. But this was not the end of his story…

I managed to pay nine thousand dollars… then there, the Arab tells me: ‘Okay, I trust you’, he gives me my passport. ‘Ne memen’ he relieved that I felt. Well, well, this is when the situation gets even uglier. I don’t know if it’s really hard to fix what they’re charging me for a Lamborghini. The days go by and the ‘brother’ sends me a message and says: ‘Hey, I already have the quote’…. $20,000 to fix two scratches, because I’ve already paid off the debt and the guy promised to really show me that they’re going to fix the car and that they’re going to send me receipts for everything.

Luisito said that he ended up paying the $20,000. However, he firmly believes that it was all a scam. To end his video, he asked his followers not to fall into the world of appearances and use his money wisely.

Beyoncé “pocketed” 24 million dollars for her private concert in Dubai

Hannibal Laguna’s tweed set, which is a classic with a lot of flair and is on sale at the El Corte Inglés outlet

The 5 bikinis of Cynthia Rodríguez, wife of Carlos Rivera, that raised the temperature on Instagram