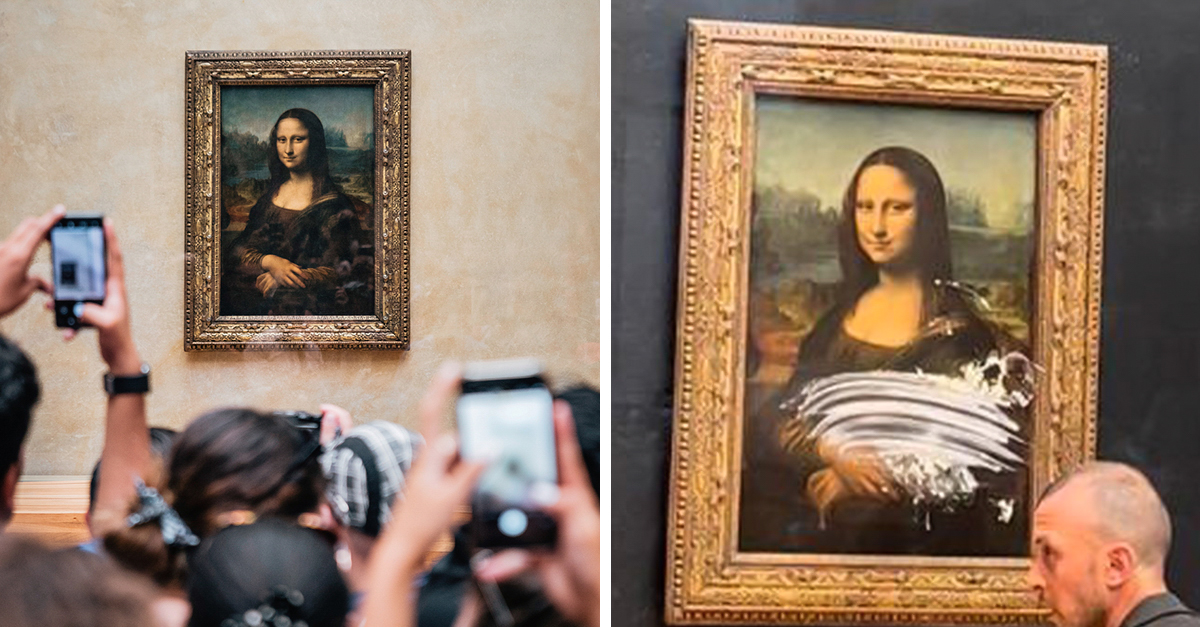 On May 29, a visitor to the Louvre museum in Paris, France, attacked the world-famous painting Mona Lisa with a cake. Fortunately, Leonardo da Vinci’s work of art was not damaged, as the pastel hit the glass that protects the oil. The act of vandalism is believed to be a protest related to climate change.

Leonardo da Vinci’s prized work, which has been the subject of vandalism attempts in the past, was unharmed due to its protective bulletproof glass case. The perpetrator, disguised as an elderly woman, jumped out of a wheelchair before assaulting the Mona Lisa.

The pastel attack left a conspicuous white stain on the glass, which museum guards quickly cleaned away. The moment was documented in photographs and videos captured by the lens of dozens of visitors who were in the venue.

The videos published on social networks show a young man with a wig and lipstick who arrived at the scene in a wheelchair. The man, whose identity is unknown at this time, was also seen throwing roses in the museum gallery.

Maybe this is just nuts to me💀but a man dressed as an old lady jumps out of a wheel chair and attempted to smash the bullet proof glass of the Mona Lisa. He then he proceeds to smear cake on the glass, and throws roses everywhere all before being tackled by security. 😂??? pic.twitter.com/OFXdx9eWcM

Maybe this is crazy to me, but a man dressed as an old woman jumps out of a wheelchair and tries to break the bulletproof glass of the ‘Mona Lisa’. He then proceeds to smear cake on the glass and throw roses everywhere, before being accosted by security.

Once the attack was carried out, the man was escorted out of the gallery by museum security personnel while shouting pro-planet slogans in French:

Can anybody translate what ole dude was saying as they where escorting him out?😂 pic.twitter.com/Uy2taZ4ZMm

A Louvre spokesman confirmed in a statement shared with The Art Newspaper The museum filed charges against the man, who was turned over to police shortly after the attack.

The museum acknowledges the professionalism of its agents who reacted immediately to the incident. This incident reminds us that monitoring the national collections remains at the core of our mission.

Unfortunately, this is not the first attack on the 16th-century Renaissance masterpiece. The painting was stolen in 1911 by Vincenzo Peruggia, an employee of the museum, a fact that increased its international fame. In addition, in 1956 he suffered two attacks. In the first, a man threw acid at the painting, damaging the lower area of ​​the oil painting.

The second occurred at the end of the same year, when a Bolivian painter threw a stone at the work, damaging the left elbow of Mona Lisa. But that’s not all, because in 2009, a Russian tourist, angry at not being able to obtain French citizenship, threw a cup of tea at the painting that shattered when it hit the display case that protects it. Luckily, Leonardo da Vinci’s work was unharmed by the attack.